Very expressive are the thoughts of the greatest Székely, Orbán Balázs in the description of the Hargita


"Here, touched by the greatness of nature, ascended above the nothings of the world, one can really feel close to God"

This mountain is in the center of Székely Land, in between the seats Gyergyó, Csík and Udvarhely, but one can catch a glimpse on Maros and Háromszék as well, so no wonder that this mountain plays such an ample role in the Székely folk literature. Throughout time on the top of the mountain the Székelys rise many monumental poles ("kopjafa" - carved wooden poles traditionally used by Székelys as funeral or memorial symbols), and many visit the mountain to pay tribute to the ancestors.

Of course since I got the SOTA fever I wanted to visit the summit and also do some activations from there.
Actually I already did it last year in the summer, but somehow between all the hiking and vacation time and everything I missed out to write about it, but at least here is a photo of last year activation with my antenna not far from the monumental poles I mentioned
Anyway this weekend another chance to visit the mountain came up, when some of my friends planned a skiing trip to the base of the Madarasi summit. In recent years in the area of the Madarasi hut (some 200m down from the main summit) a skiing resort has started to build up (fortunately towards the other side of the mountain) with increasingly easier access. This also means that reaching the summit become relatively easy even in winter periods. Anyways we packed up and headed out to the mountain Saturday morning. There are two routes to reach the resort, one from Ivó (Izvoare) the other one from Szentegyháza (Vlăhița), both are forest roads, but the first one which was for long time the only access road is in worse shape, recommended only for 4x4 vehicles, the latter one on the other was recently improved and it is quite easy even for normal cars, even though in winter period snow chains are required. We of course took the Szentegyháza road (as its also closer to my hometown), which is a long boring road at the beginning, with the last part having some very steep and windy ascending portion, and because the fresh snow chains have to be put on. The weather wasn't on our side either with very thick fog and chilling wind covering up everything before us. Still it was okay for skiing, and in the pension we staying for the night was very warm.
I planned for a sunrise activation for Sunday, climbing to the summit before sunrise to take some nice pictures, but unfortunately the weather did not improve until the morning, the thick fog still covering the entire mountain I decided that it doesn't worth to go up in the dark if I can't make some good photos. Thus I was heading out 2 hours later than planned, still in thick fog but at least with light as well. Something like this:
The trail to the summit is an easy one from the hut, in summertime is a well marked path (blue triangle), in the winter however all the markings are covered with snow. Fortunately due to the popularity of the summit there are always widely used tracks making it easy to follow even in fog. The ascent is about 45 minutes with 180m of elevation but no steep parts on it.
The bad weather continued while I arrived to the summit, with a chilling wind and on the more exposed parts with some slight to heavy snowdrifts. I had to find a spot a little bit down from the summit behind some group of pines where is was somewhat protected from the wind and dig into the snow for my "shack".
Started working on 20m, but in the beginning contacts were scarce, I did hear plenty of station around the band but none seemed to pick me up. And then in an instant the weather improved drastically, the fog all disappeared in no time  nice clear sky and sunshine offered me a great panorama around, and also contacts started to come in. The only inconvenient remained the cold (something between -20 to -10°C) which did get into me finally and decided it is time to go.
Of course not before taking some more photos, the weather now permitting some great scenery. Here is a couple of shots of my activation site: 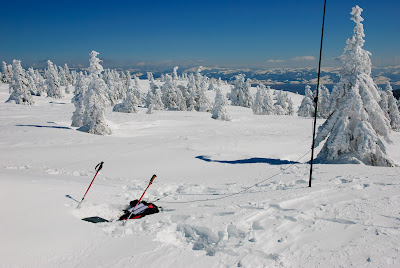 I spent some more time taking pictures of the snow covered pines, which offer some really nice to really strange formations, here is one of my favorites (I call it "Dragon-rider")

Some more you can find as usual over here.
And for the end a panorama of the summit with all the monumental poles:
Overall it turned out to be a great day, really enjoyed the activation, and even though I had less contacts than usual, still had the satisfaction of contacting 2 new countries for me from SOTA summits: 9H and GD and of course all the nice chats with the already being regular chasers. Thanx to all of you for contacting me on this special summit for me, and hope to hear you soon from other great summits of YO land.
Bejegyezte: YO6PIB A bejegyzés időpontja: 21:00