While I was last week at Arad, I certainly could not stand without doing some SOTA activation, so I looked around the easiest summits in the area. After a failed attempt on the easiest one (YO/WC-033) it was time to check out the next easiest and the closest to Arad, namely YO/WC-033. This time I was also joined by my brother in visit also at Arad, so was a good time also to get out together somewhere. This summit, which is actually called Hidegkút / Fântâna Rece, is right next to the Schitul Feredeu monastery giving it a fairly easy access. Being an orthodox monastery it's not surprising that there is a very good asphalt road up to it, so we can drive up to almost 100m below the summit. At the monastery there is a good parking space, where we left the car, and continued on the road turning from asphalt to a mere a forest road (although in a very good shape also). After a few hundred meters on the road we found a nice trail to the left:
As it was in the direction of the summit (the road actually goes around it) we checked it out and it proved to be a good choice as it took us right to the summit. The trail is unmarked, but very easy to follow, it may be pretty circulated.
After about a half an hour of climb we arrive at the top, which is marked with a concrete column, which is also a good place to attach the antenna. The whole summit is covered with forest, and in the area there is no larger clearing, so the summit is as good as it gets.
Fortunately for us it was still ok, after installing the antenna and turning on the radio I stumbled upon LA5WNA activating a summit in Norway, and he also came back almost instantly to the S2S call. After that I moved up in the frequency and after spotting myself a small pileup was building up for me as well. Thanks again for every chaser for looking out for me, certainly me working with 5W out of a pretty thick forest wasn't an easy pick for them. After the pileup ended on 20m, I also tried 12m but the band was completely dead and I also called in vain on 2m FM, nobody in YO2 area was near the radio. Overall it still was a good activation.
Here are a few more pics with me and my brother at the activation site:
A last note about the summit: the actual peak is at 572m, however in the actual ARM it was miscalculated at 496m so it scores 1 point instead of 2 as it should. In the next version of the ARM this will be rectified, meaning the summit will be deleted and a new 2 pointer added instead. The position won't change however so the getting to the summit will remain the same also.

EDIT: as of 1st of october, the version 2 ARM kicked in, rendering YO/WC-034 inactive, the new reference for this being YO/WC-189. Let's see who gets it first.

EDIT2: on 27th of december I did another activation this time with the new reference, and also checked out some new bike trails that appeared since our last visit. Here is a track of what I think is the best approach to the summit: (cyan: with car up to the parking of the monastery, blue: hiking mostly on the largest and easiest tracks): 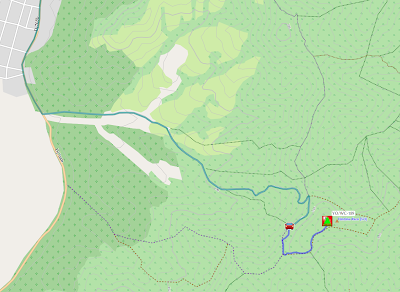