Sidenote to the YO SOTA marathon 2014

The last week took place a very nice initiative of Sorin, YO2MSB, the YO SOTA Marathon, a full week of SOTA trip in the highest mountain ranges of Romania. Many amateurs responded to Sorin's call so a team of YO2BP, YO9IRF and YO8SEP joined him on this tour. Unfortunately I already had may two week vacation before, and had to be at work so I had to skip the tour (will not make this mistake next year) and I could only join the guys for the last day of the trip.
But before going on with the events of that last day, if you are interested by the full story, here are some links:
http://yo9irf.blogspot.ro/2014/08/sota-tour-yo-2014-part-i.html
http://yo9irf.blogspot.ro/2014/08/sota-tour-yo-2014-part-ii.html
http://yo9irf.blogspot.ro/2014/08/sota-tour-yo-2014-part-iii.html
http://radioclubulromaniei.ro/maratonul-sota-2014-2/ (in Romanian)

So back to my journey. The marathon as planned by Sorin ended on Friday with 2 summits near Brassó, YO/EC-011 and YO/EC-428, both being already activated by me, they are sort of local summits. I managed to get off for the day, so I had two options: join the team on their activation or go to another nearby summit and have some s2s with them. After some thinking I decided to have both: so while they are activating YO/EC-011, I go to another nearby summit, Hoapecu, YO/EC-367 (which wasn't so far activated) and then join the team on YO/EC-428.
So early morning I set out to the village of Holbav, west of Brassó, just under Hoapecu. Parked the car near a playground just after entering Holbav, to the left of the main road. A forest road starts from that intersection, which as it turned out takes right to the Hoapecu peak. Unfortunately mapping is close to nonexistent in the area, so here is my track to the peak and back: 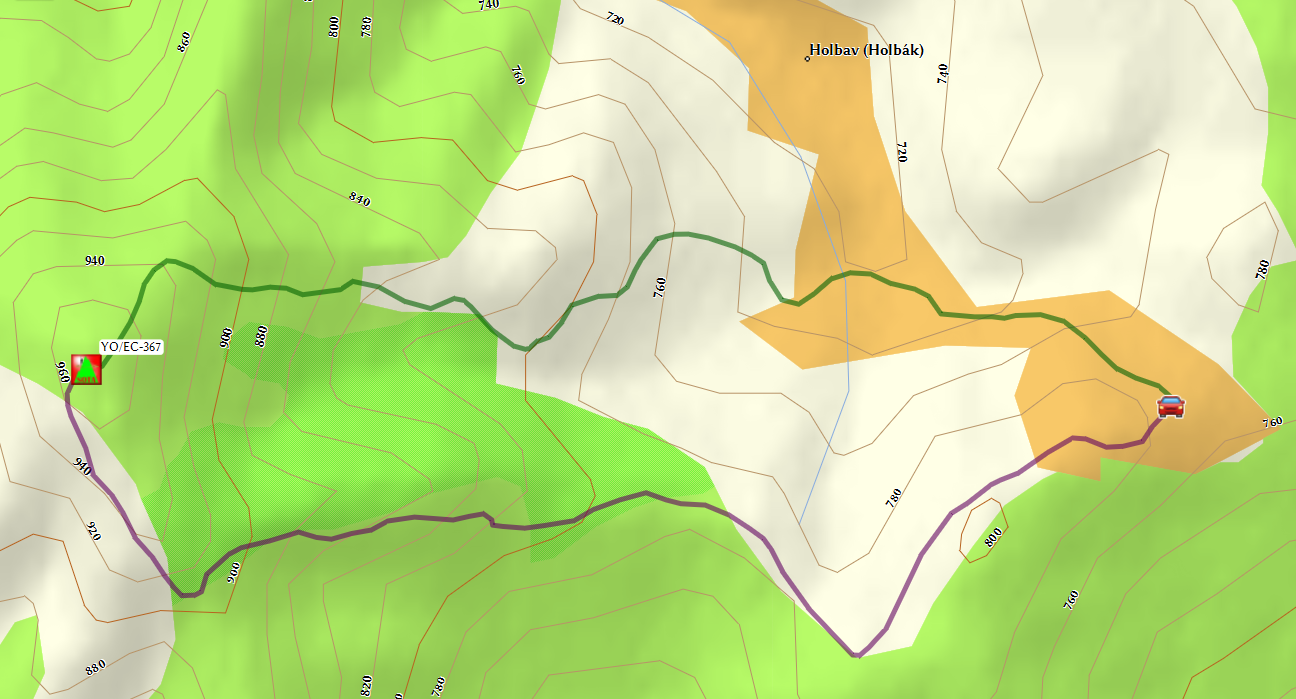 As you know me, I like to explore the area I'm activating, hence the two trails to the summit, the purple one is I took going up to the summit, as I said it starts next to the entry into the village (eastern part) and follows a forest road, actually a quite good road, used by horse carriages and perhaps 4x4 vehicles. The slope is quite gentle, it goes by on a ridgeline with a small portion of about 2 serpent curves in the middle of the forest.
The summit is about 40 minutes of walk, mostly in forest, but the last part is a large clearing with a great panorama to the south, with cottages spread out on the hills around: 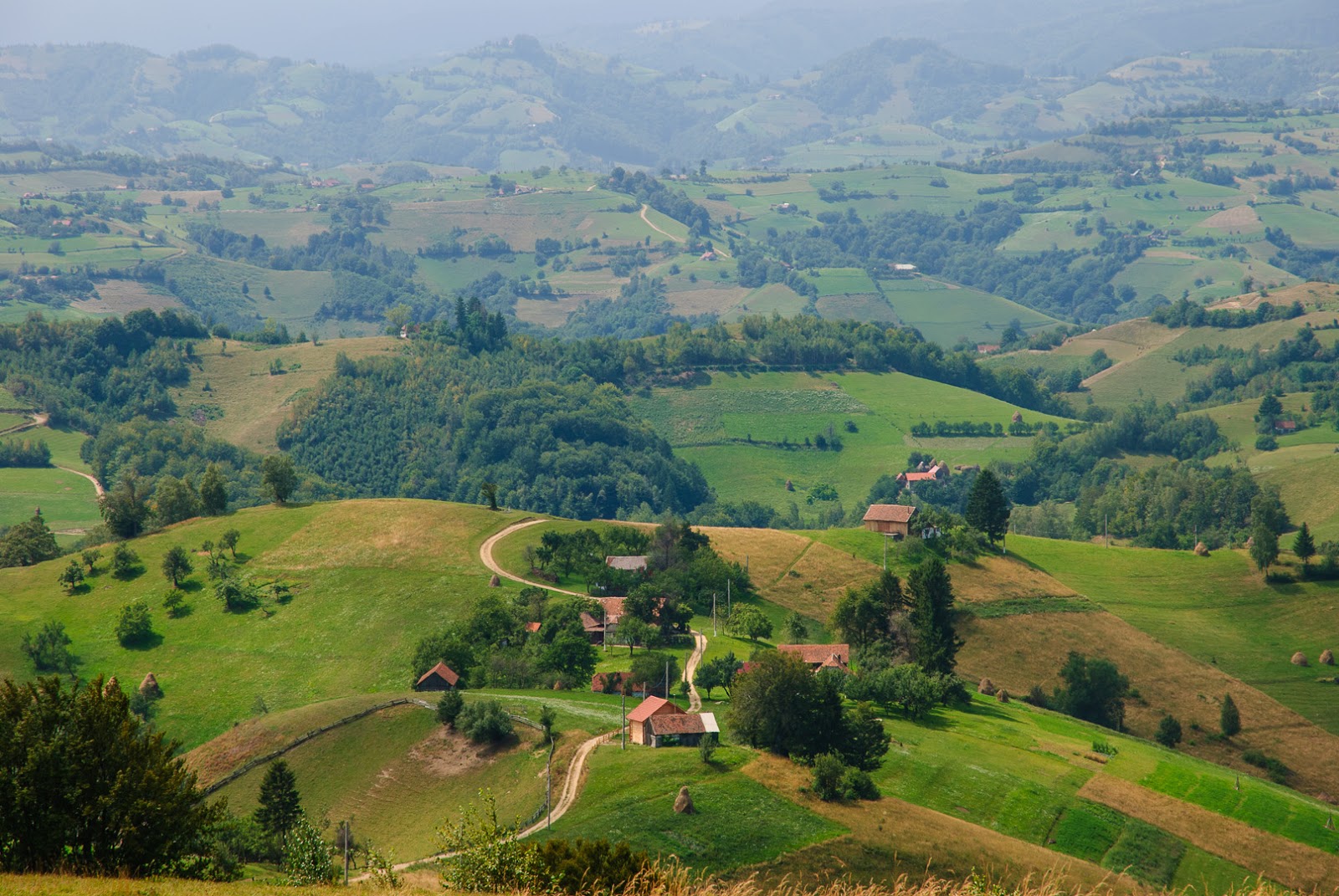 It is a nice quiet place to retreat from the rush of the 21st century.
The summit is again covered with forest, but just next to the road, there is a narrow clearing, enough to erect an antenna and to have some clean takeoff angle: 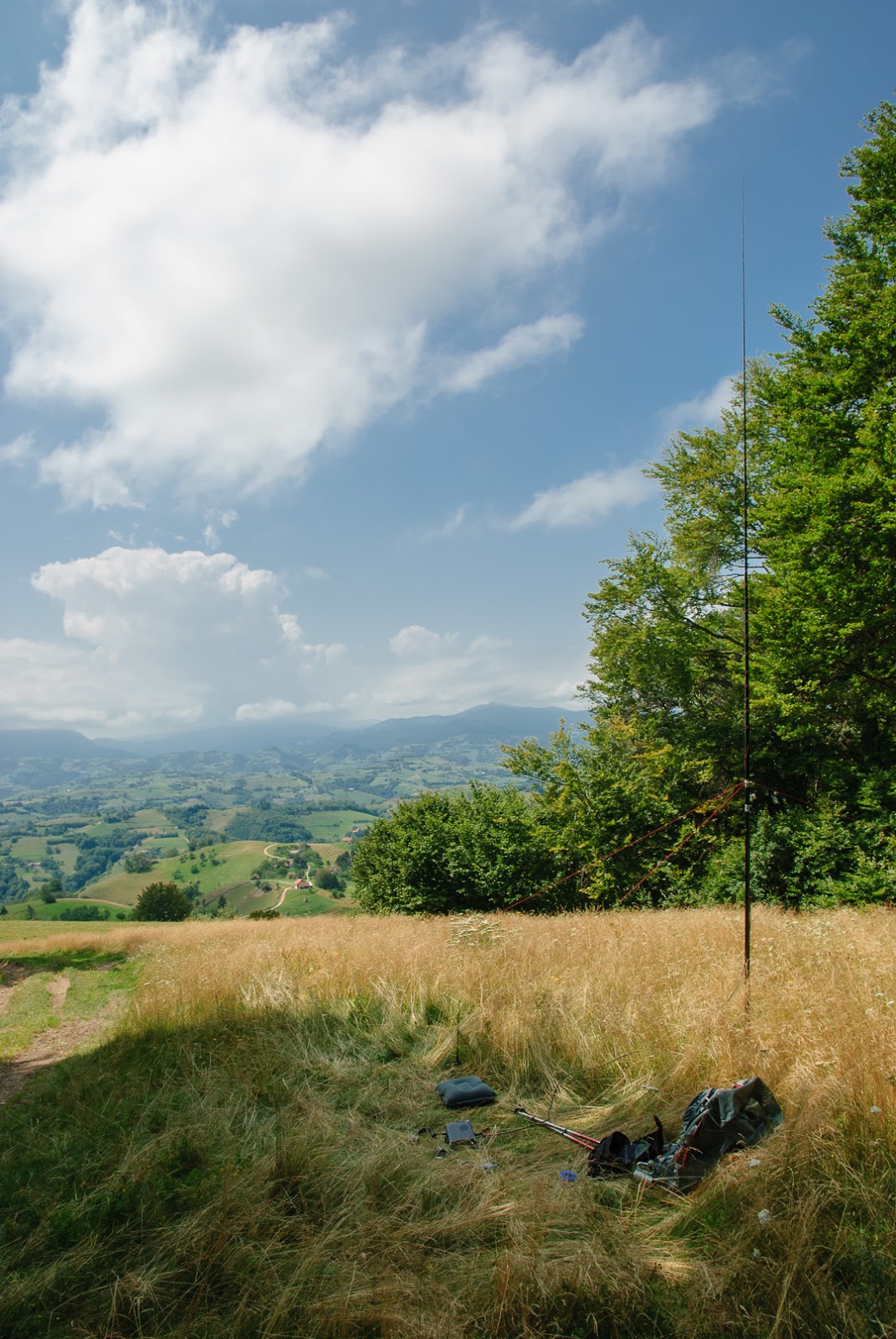 So I quickly set up, made myself comfortable and started to look out for the guys on the SOTA trip to check whether they arrived to the summit or not. Well after some shouting on 2m FM, finally managed to have a chat with them, and it turned out they just barely woke up from last night's party, so it was still lot of time to waste until they will get to their summit. Well at least the weather even though looking ugly was still acceptable, no immediate sign of rain, so I started CQing for SOTA, and this time had a lot of time to answer any calls (remember my last two weeks of rushing through summits and complaining about not able to work everyone waiting for me, well this time I made up for that).
I operated about 3 hours on the summit with great success, and finally I made also s2s contact with YO2MSB and YO9IRF (it turned out that YO8SEP took off earlier, and did not join them for the last day), after that left them with my operating frequency and started to pack, to have enough time to meet them outside Brassó for the last summit of the day.
For going back I took another route, it was actually following the road I was coming up, which continued the other side of the summit (marked with green on the map above). This route offered a nice view of the village Holbav: 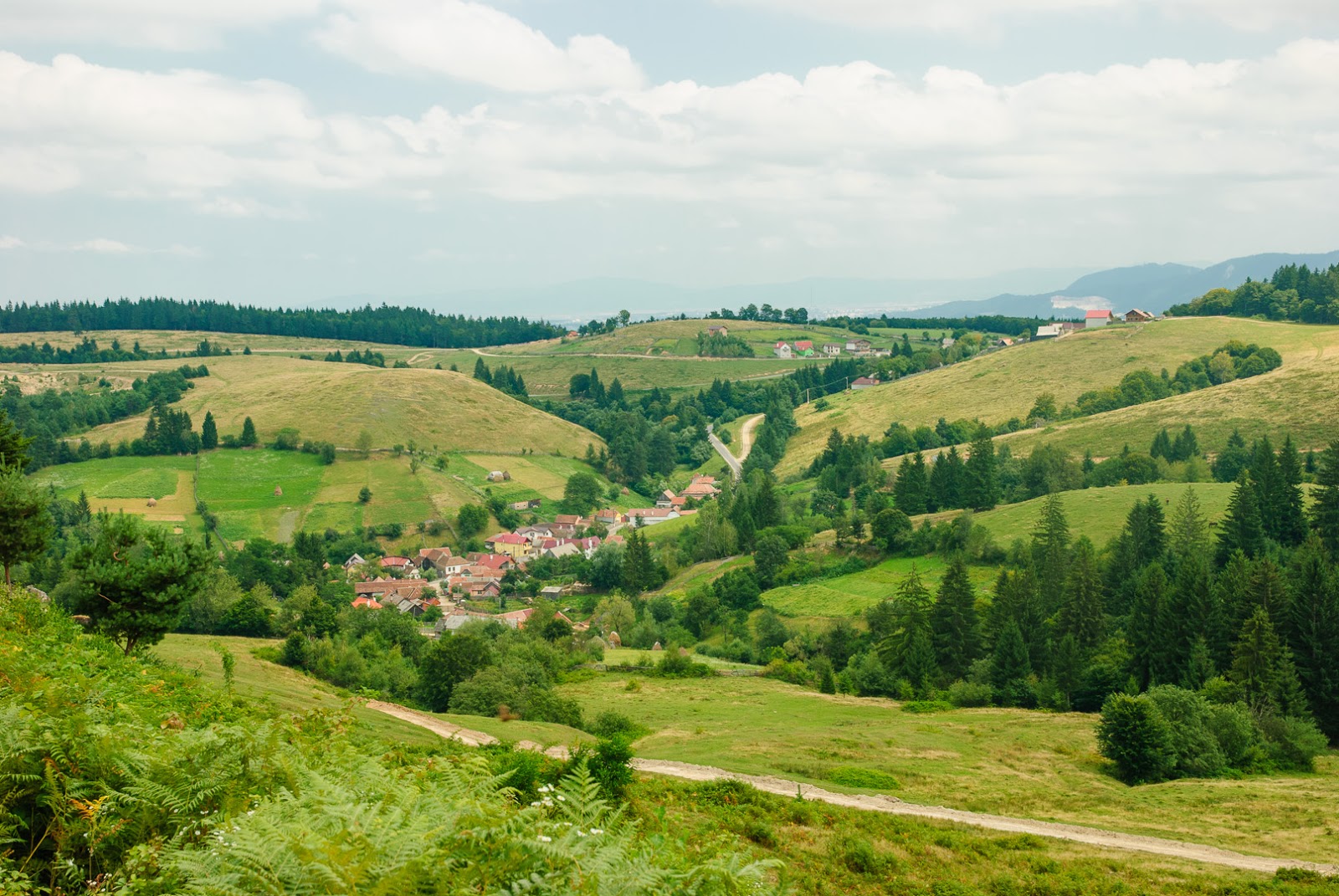 you can see the upper part of the village, where I left the car and the lower part, where my route entered. This also meant that after descending a lot more then the route up, I also had to climb back to the car. Overall this route is the harder I think, there is also a very large portion of a steep slope and the total height difference is bigger also. Even if it looks a bit shorter it took more time to descend than it took the climbing.

After getting to the car, I rushed back to the city to meet the marathon team. They also finished in the meantime their activation and was en-route to YO/EC-428. I met them in Szentpéter village, north of Brassó. We had a small chat there, after that YO9IRF, who was already tired of the whole week activation took off towards home, and left me and Sorin to climb the summit and activate it.
A nice short hiking followed, it was already a familiar place for me, but Sorin was very excited on the area, after a full week of bare alpine adventure, a nice clean forest reservation must have been a real refreshing experience.
Here is YO2MSB at the mike: 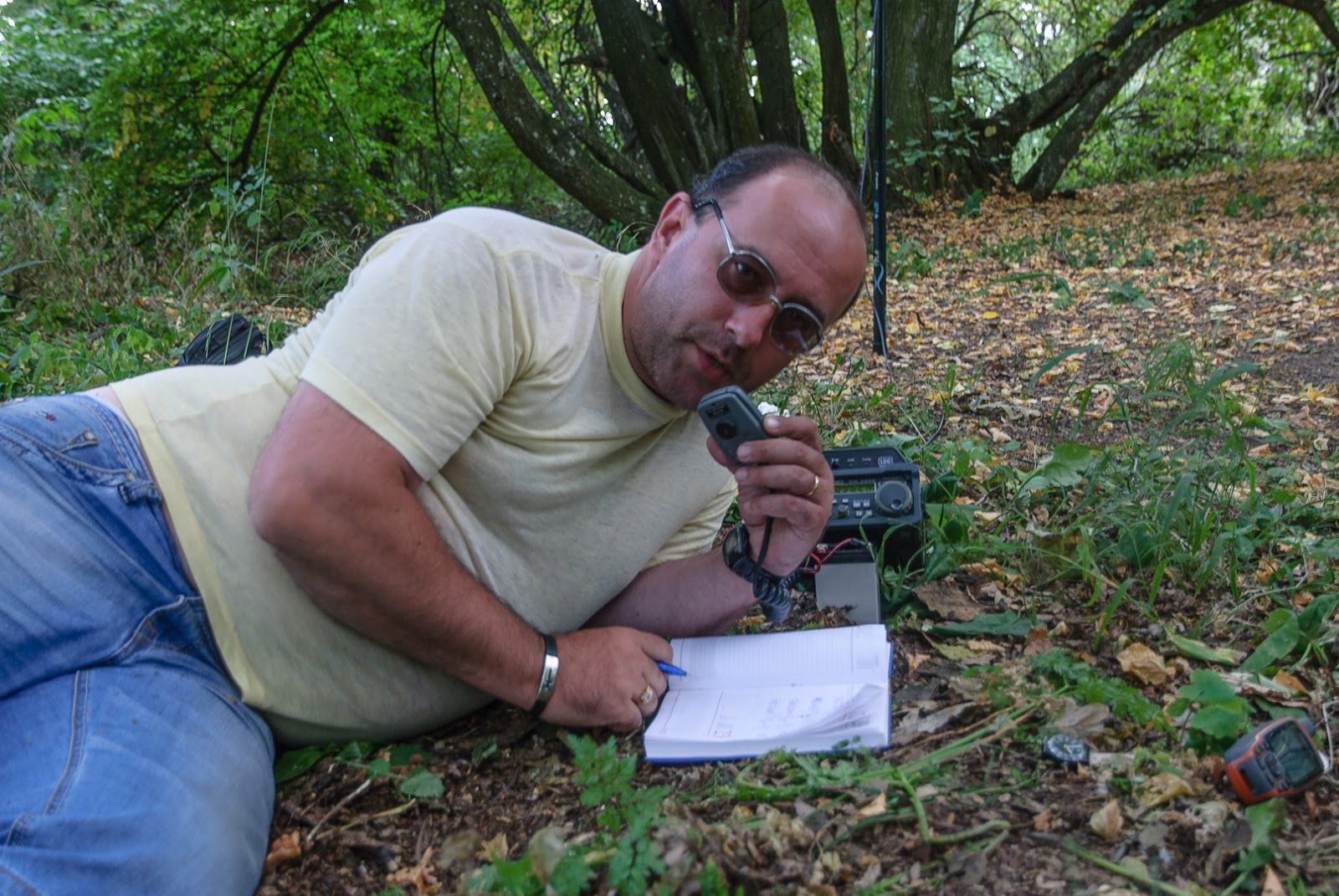 Overall a nice experience I think, and I definitely have to join them next year.
Bejegyezte: YO6PIB A bejegyzés időpontja: 11:13