A weekend in the Căpățână mountains

This time we had a full weekend of hiking in the south, near Horezu city with some small hills and big mountains. The idea came from Mihai, YO6HXO, to visit his uncle living in a small village near Horezu, and couple it with some hiking in the Buila-Vânturarița National Park and the Căpățânii mountains.
So we left early from work friday afternoon to take a 4 hour drive through the valley of the Olt and then in the Sub-Carpathians
In the way we stopped to admire the trovants, these strange rock formations which have a dedicated museum in Costești: 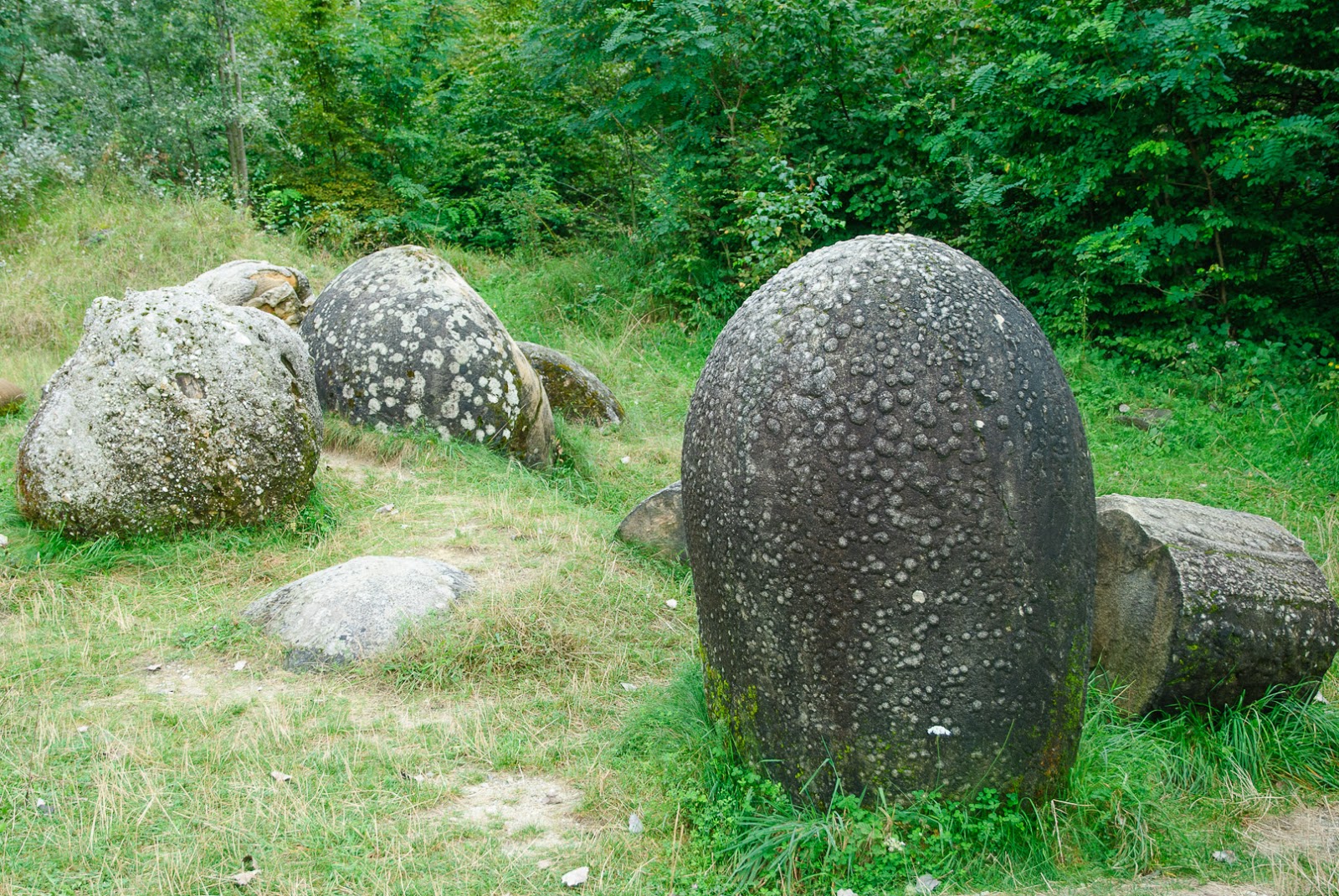 and of course to take some photos of them 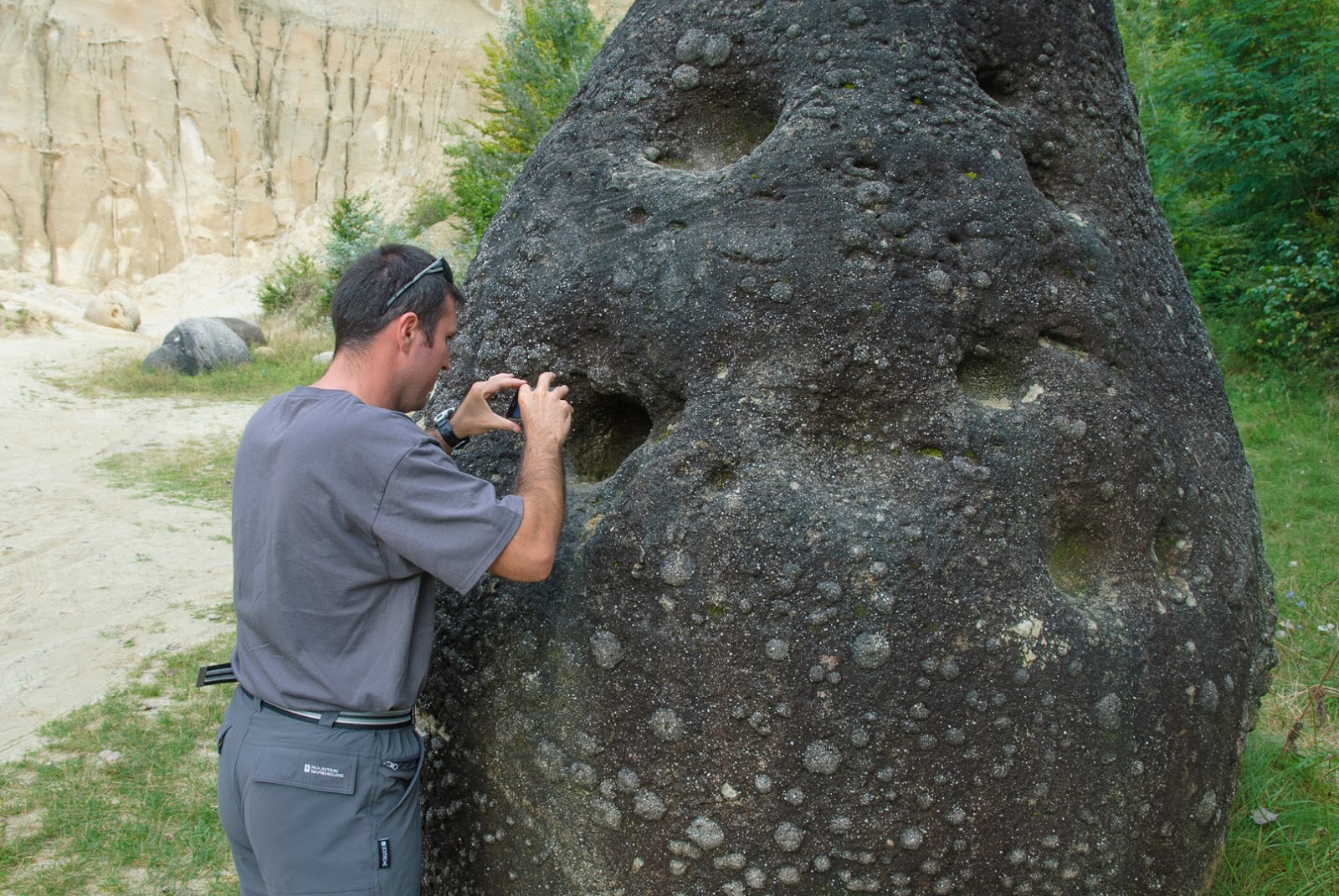 If your are wondering what Mihai was photographing, well here it is:
Anyway after a lot of driving and admiring places it was time for some SOTA fun as we arrived to the edge of the Buila-Vânturarița National Park. Of course there was plans for visiting it more thoroughly in the weekend, but for starters we had this smaller rock on the southern side called Arnota which is quite easily accessible, taking a right turn in Costești and then through Bistrița, finally going by the quarry on an impressively good service road, which after the quarry it even turns into an asphalt road leading to Arnota monastery. From the monastery comes the hiking part, about 1 hour to the summit, mostly because the track is quite non-existent, we did find from time to time some old markings but not enough to follow them so we had to find our road. The fog wasn't helping either 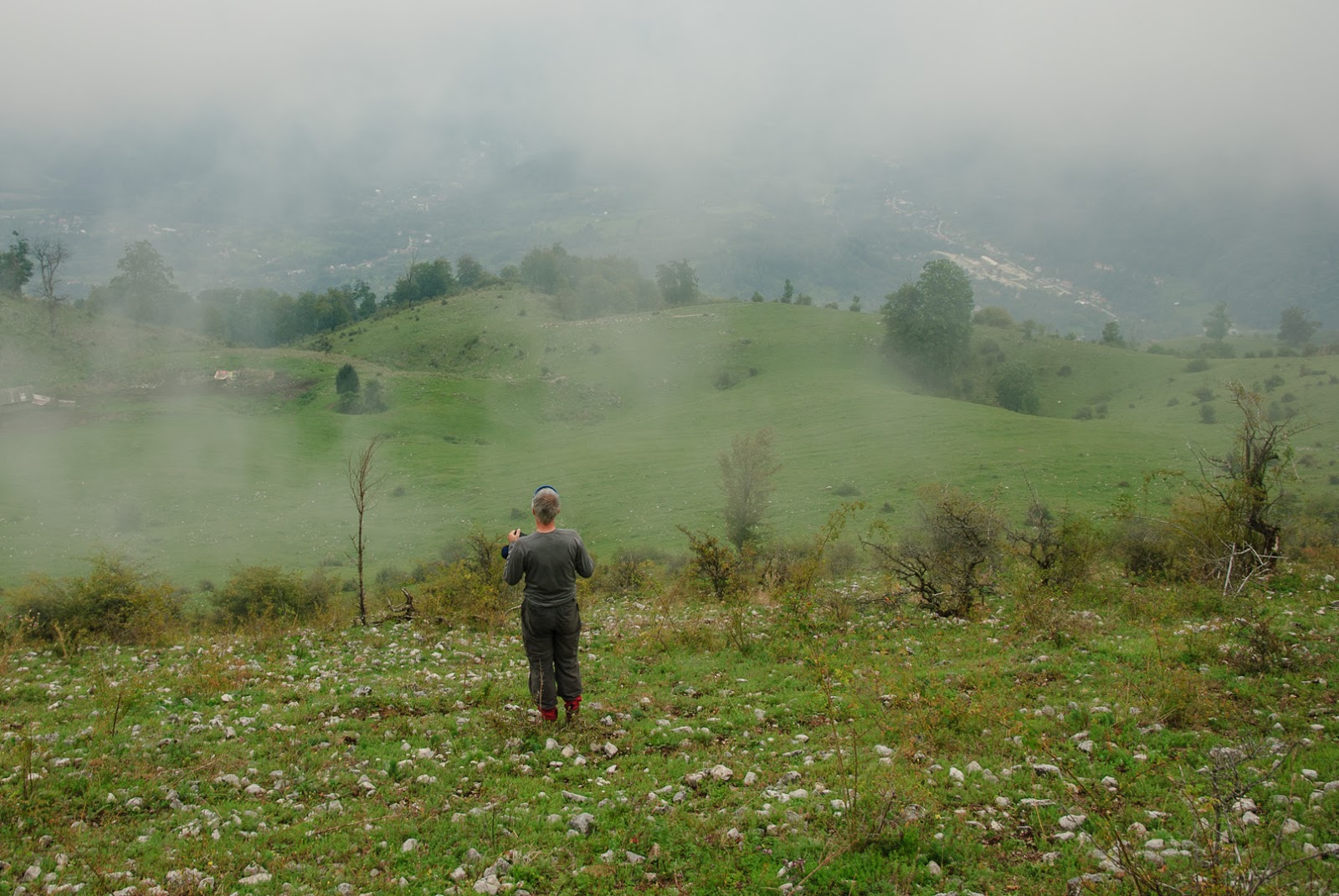 and of course it hindered our attempts to make good photos.
But at least here is the track from the monastery to the summit: 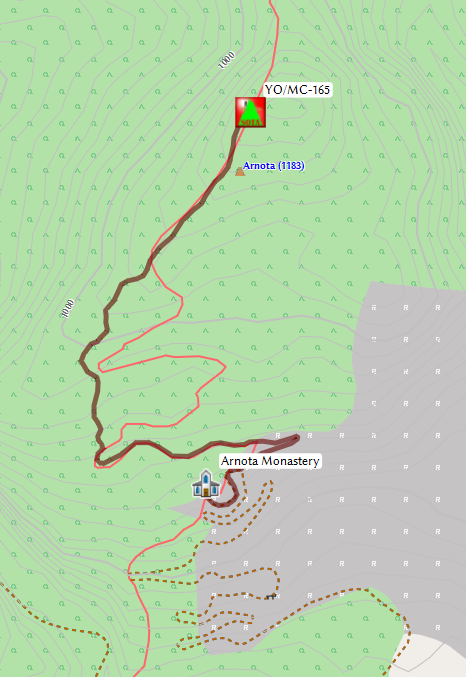 As you can see we didn't really managed to find the hiking trail (the red line on the map) even though it was also on the map, but nevertheless the terrain is quite simple, and we even managed to get down without a hitch in the dark.

Next day was time for something bigger, highest point of Căpățână mountains, the Ursu peak with an altitude of 2142m promised a good hike for the day.
Actually we were waiting for a more serius hike, but as it turned outm there is a quite good road (recently renovated from EU funds as sign at the entrance says) up to Roman monastery at about 1700m level. Starting from Horezu, the road is well indicated, first to Romanii de Jos, and then at every intersection you can find directions toward Roman monastery. A good gravel road takes to the plateau, where a lot of activity waits, recently built weekend houses, rescue stations, hotel/restaurants hint at a rising tourism activity in the area. I wouldn't be surprised if a ski resort would open soon there.
Anyway once on the plateau, the road continues towards the main ridgeline, so we also followed it to about 1800m ASL, when a big bog on the road stopped us. It looked quite deep, so I didn't want to try it with my car 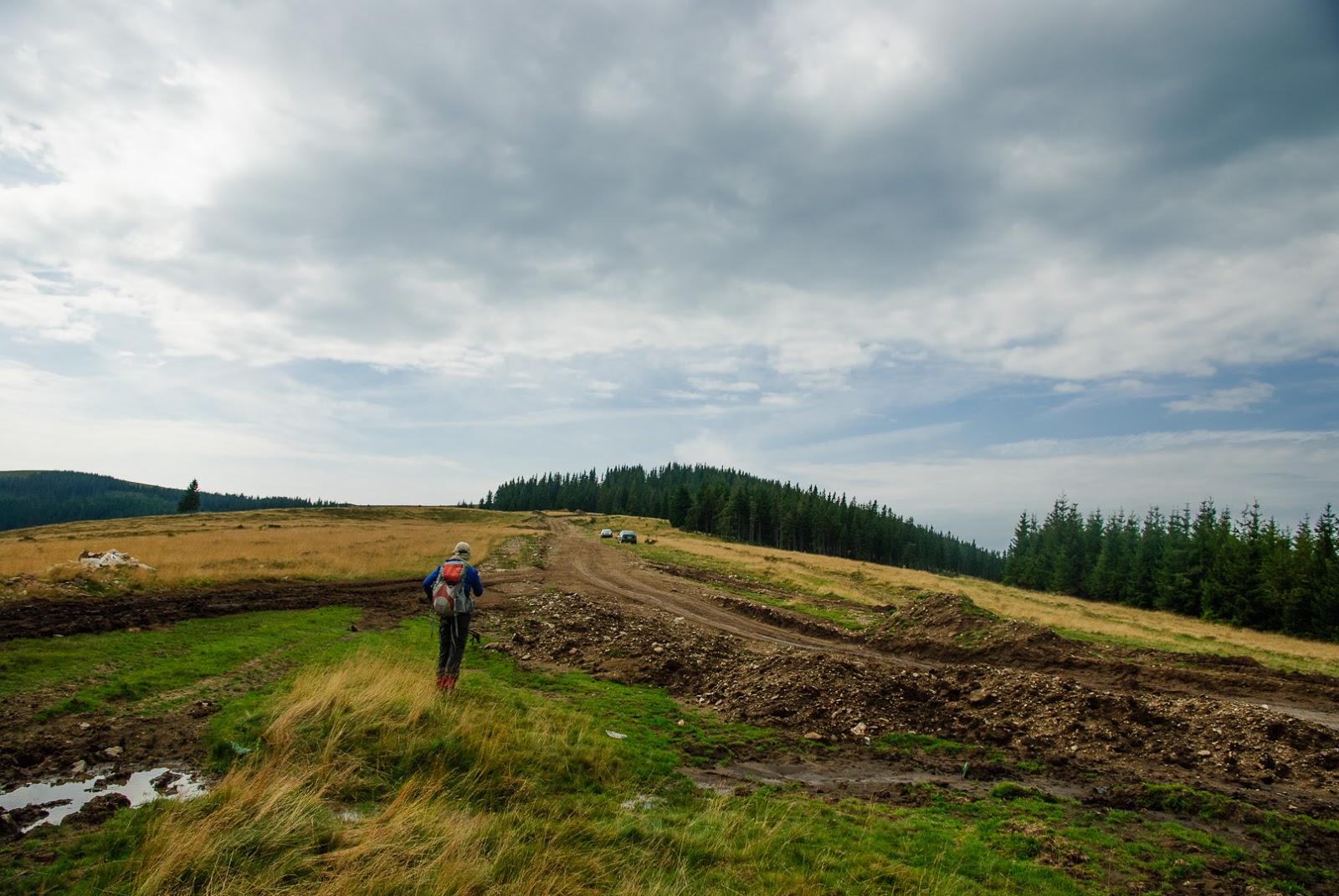 so from there we continued on foot.
Obviously not everyone was so worried as myself, we met quite a lot of traffic: 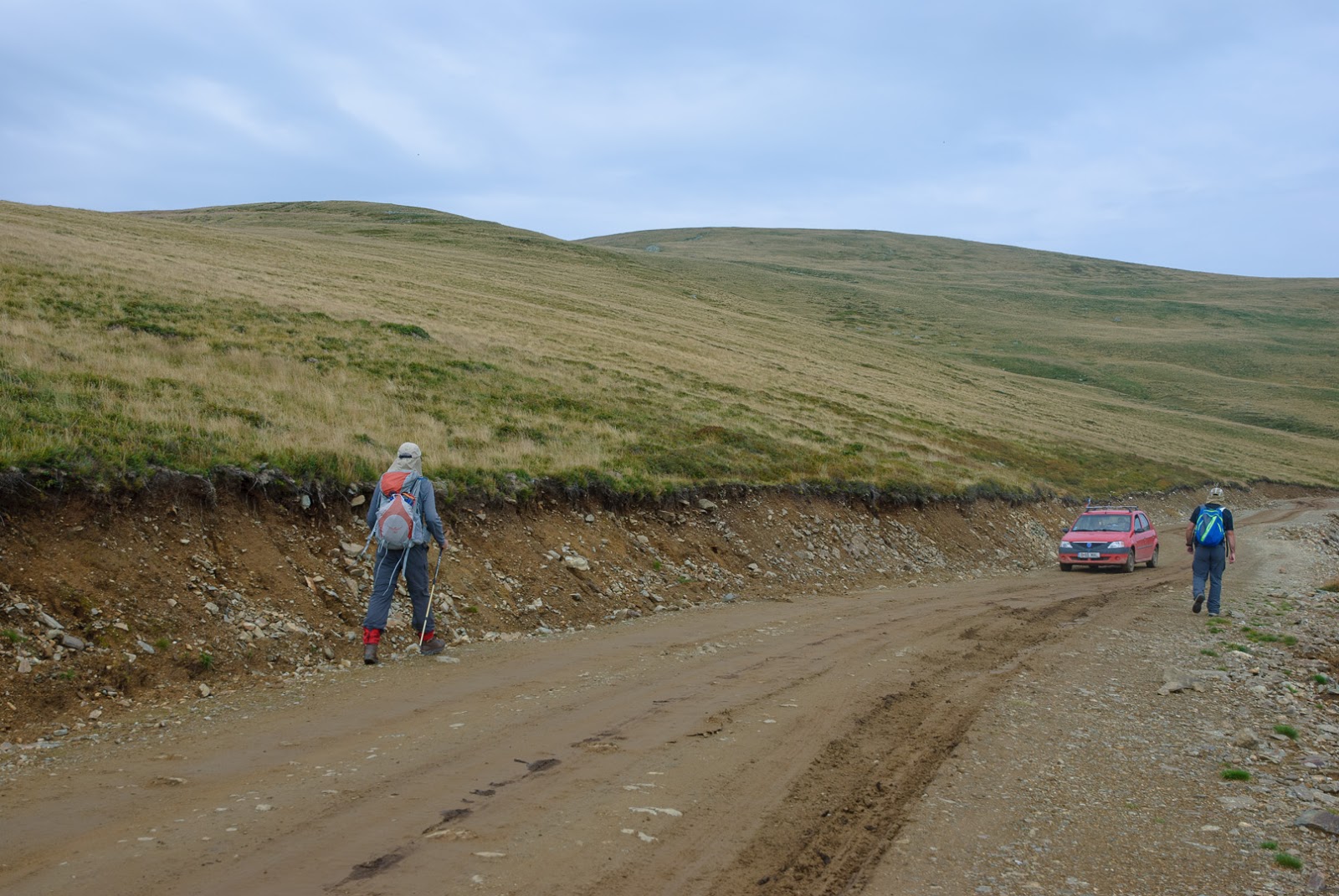 And also quite soon we found out why the good road up the mountain: 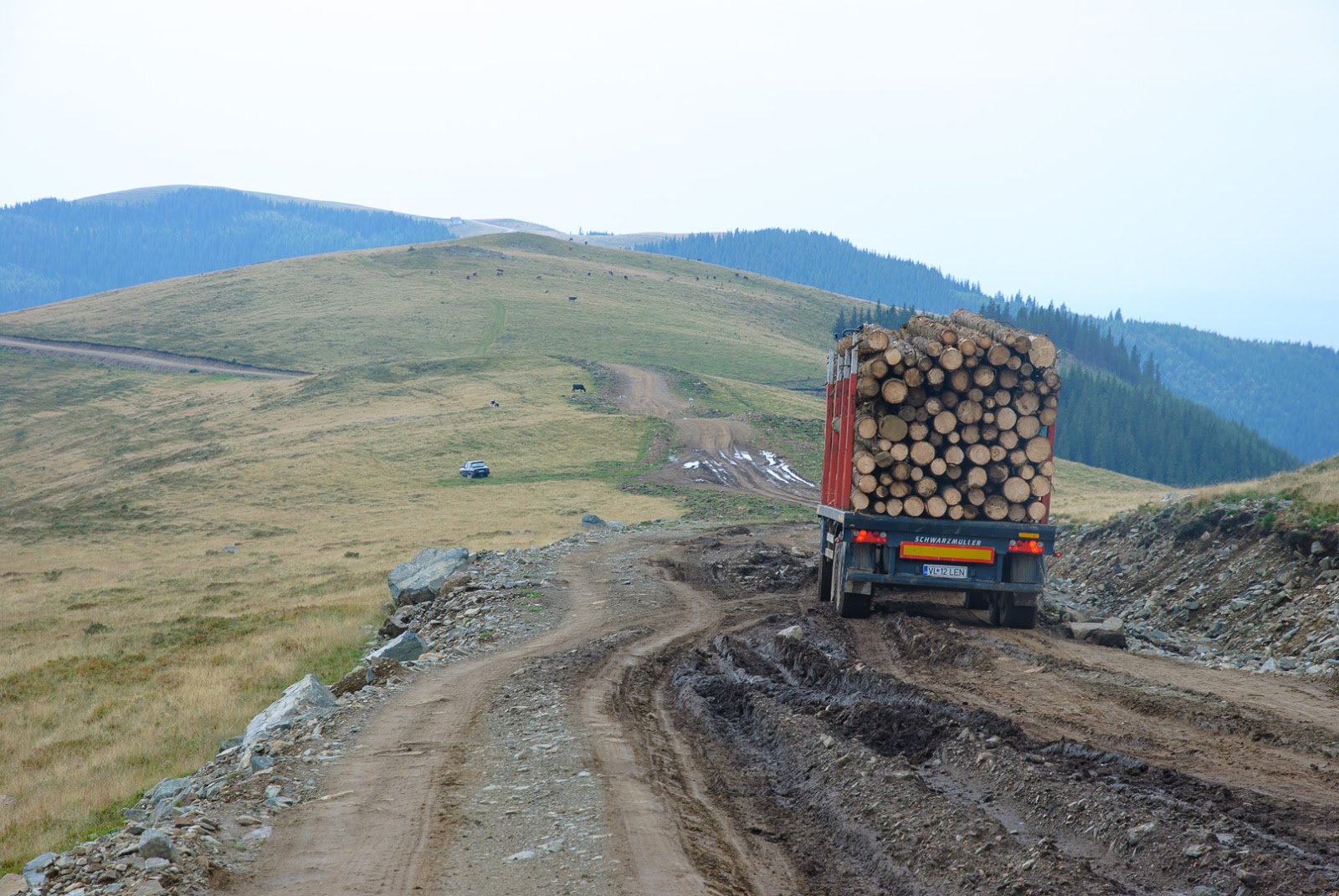 I don't want to insinuate anything, but we didn't so any tree at this altitude and anywhere above us.
But beside these, a much more peaceful sight waited in the alpine region: 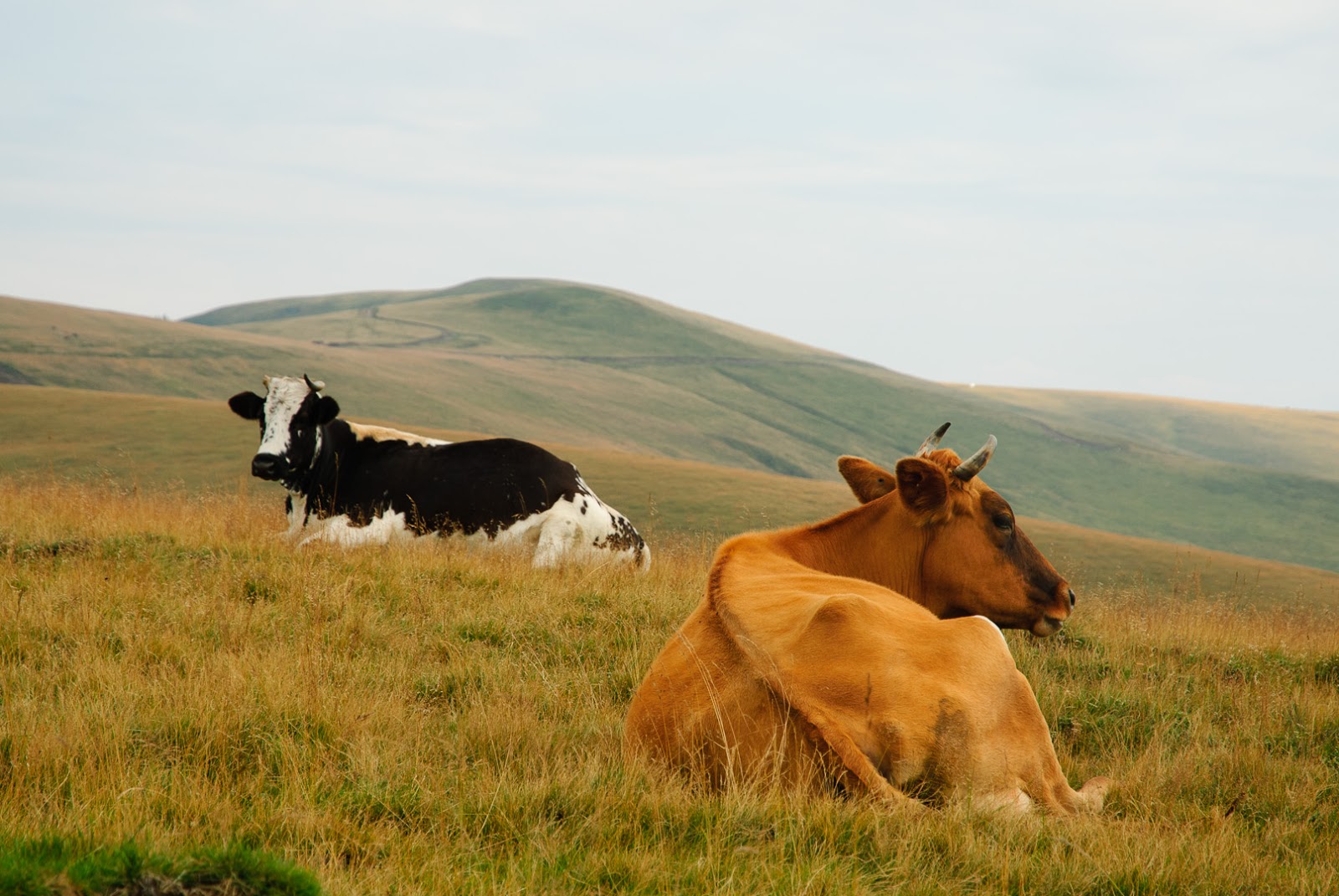 and of course a lot of cowberries for us to graze :) 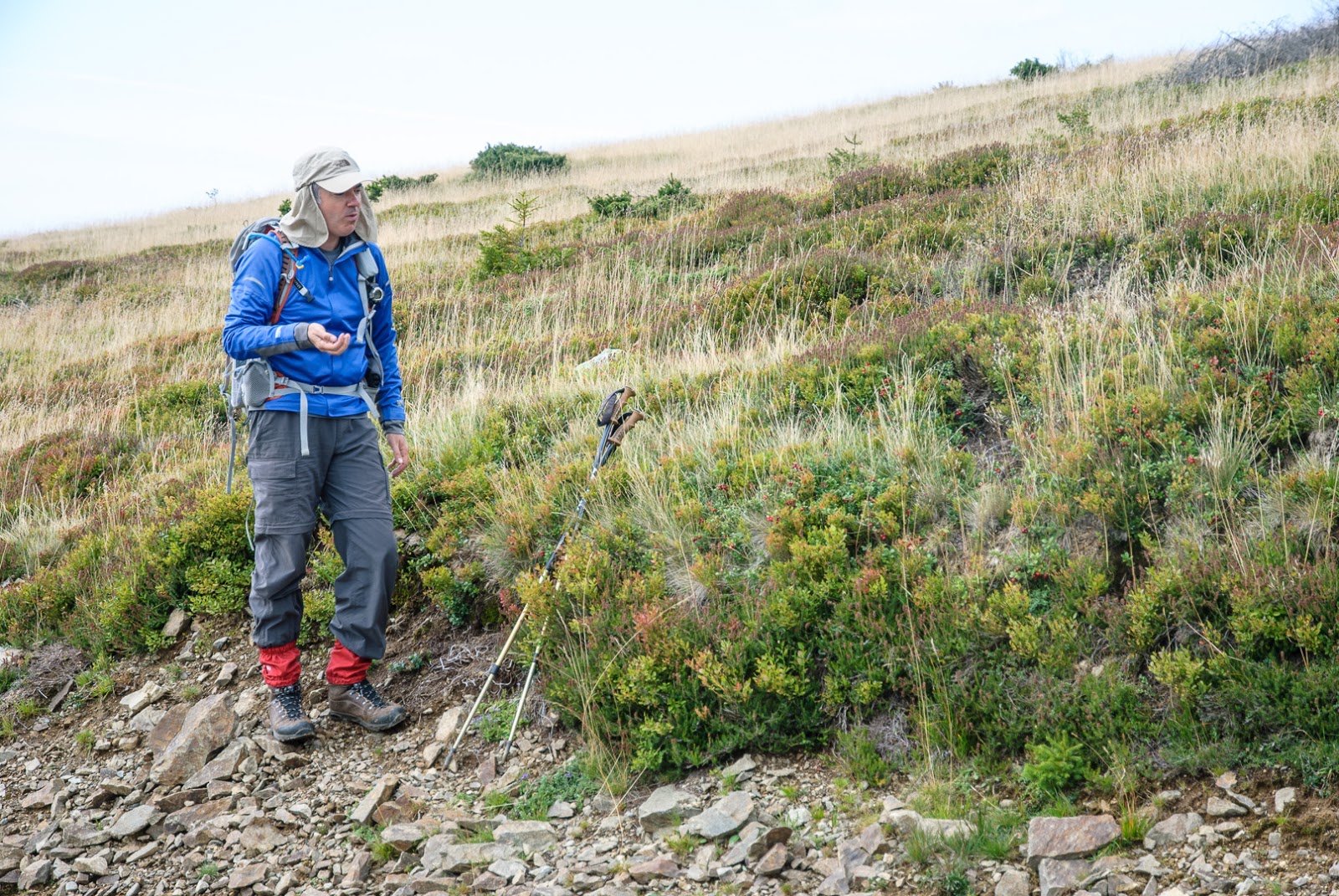 After arriving to the main ridgeline of the mountain, the road we were following so far turned to the right, while the summit was to the left, so we had to switch to a much less used road 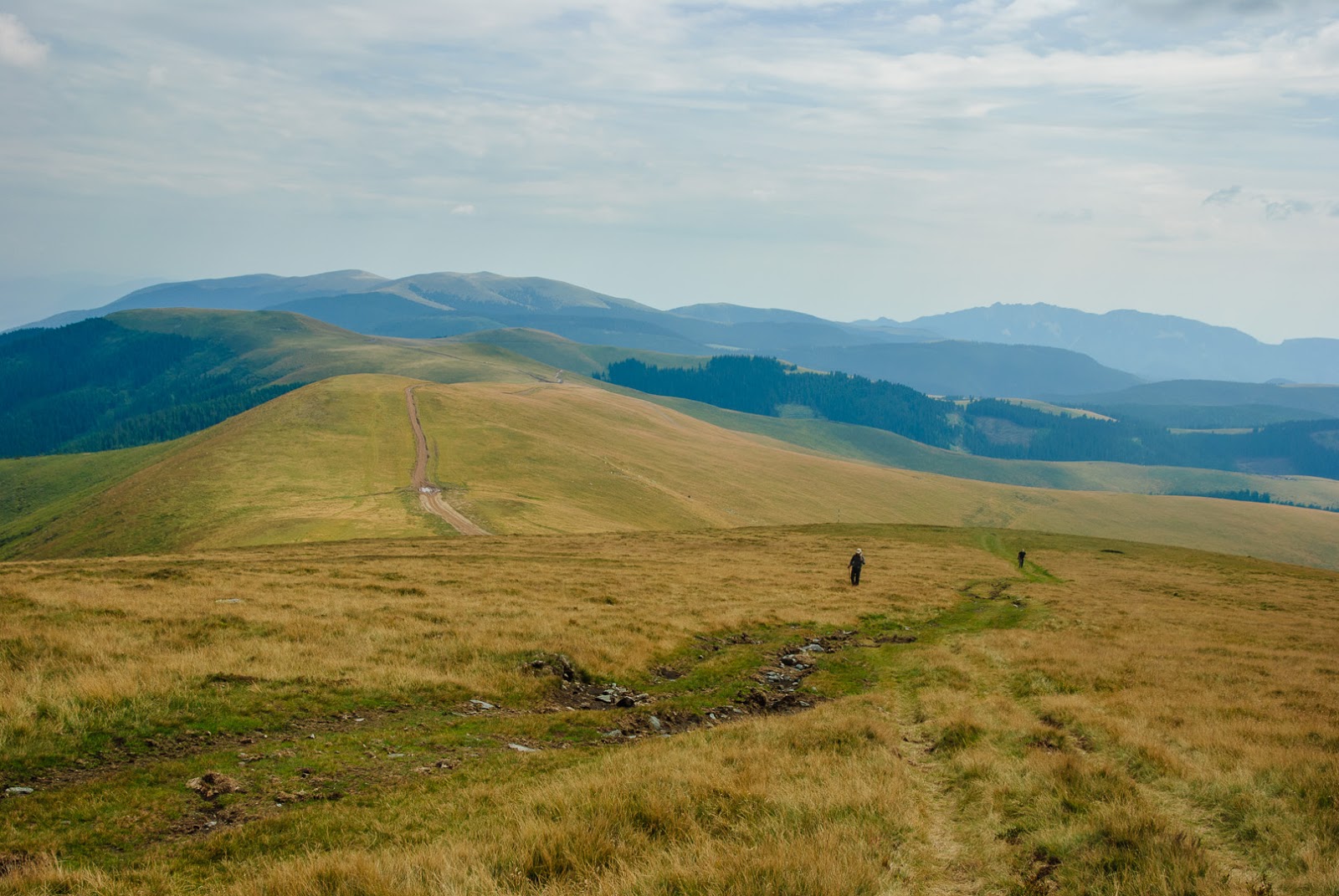 taking us close to the summit. That road also takes a bit below the summit, so the last 50m is plain climbing between rocks 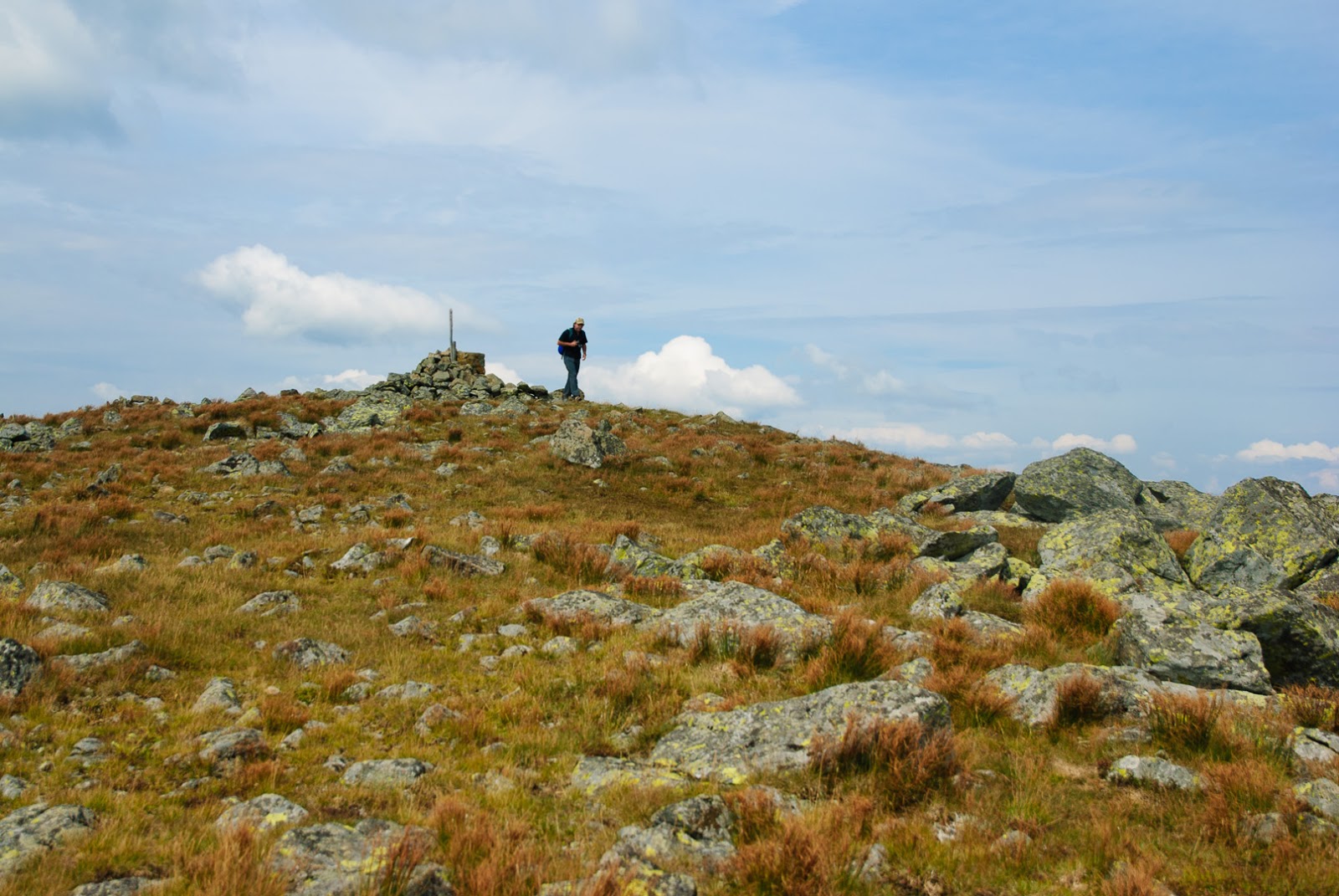 The summit has a summit-stone and some big rocks piled up, so it's a good place to put up the antenna. However my antenna which was mildly underperforming the day before, gave up this time, and the backup antenna wasn't in good shape either, not to mention the propagation, so after a few QSOs (barely enough to qualify the summit) I had to give up.
Especially that we wanted to bag another summit for the day, so continued our hike towards the next peak to the west: Nedeia. However after about an hour of hike we met an indicator saying Nedeia is another 3 hour hike, and we could also see in the far distant, that it is indeed a serious hike to there 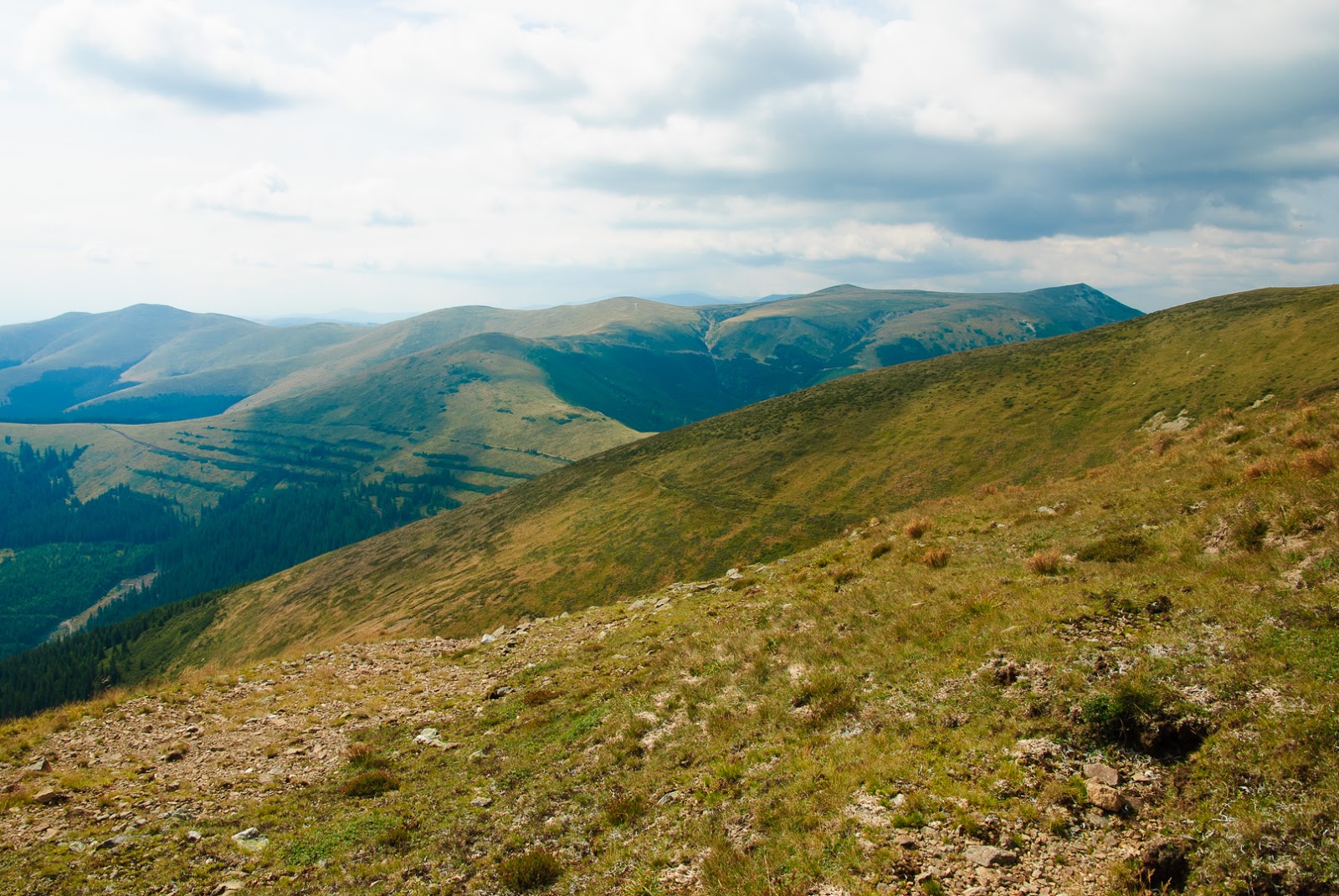 so we decided to turn back, and get down from the mountain in the daylight. Already in the autumn the day is short so we couldn't get back in light if tried for Nedeia. Perhaps in the summer.

But to not end the day without a second summit, after getting down to Horezu, we have stopped to activate the small hill of Slatiaru, which we thought would be easy enough even in the dark. Well as it turned out, it was much harder than the 2000 m summit before. It was only about 180m climb on a hill covered with forest, but the slope was sometimes near vertical, with some cliff on either side, so it was a sweaty peak, and of course in the dark. But at least some points bagged in here also.
And the last points for this area, as tired from the day hike, and also road home ahead of us, we decided to postpone the summiting of the Buila-Vânturarița for some other time, with longer daylight and better WX conditions.