So I finally arrived to this magic number. After almost 5 years of hiking to summits with some radio gear, today had the chance to reach a first psychological limit that will now make me think on closing in on MG, a goal which seemed very very far far away back in 2010 when I first put my foot on summit (and came back without any points because the lack of interest in the activity back then).
I had this one planning the whole week, I even invited a bunch of people to join me, and the plan was to make it more interesting to go to YO/EC-145 starting from Azuga, then descend to Predeal and it time permits climb to YO/EC-241 to reach the 100th activation. I bagged both summits last year (or a year and month) so they are not new, it was just the long hiking route that made it a real nice crowning of the day.
I will not describe the route as detailed now, as I had done so already after my previous activations, I just want to share some photos taken along my hike.
An yes it was my hike, as it turned out that even though I was expecting a few guys joining me, it turned out that they might have got scared from the 1cm fresh snow that fell the day before, or just couldn't get up at that early hour. Yes it was indeed early, as planning a longer route I decided on taking a train to Azuga, and the only one suitable was leaving Brassó at 6:20 in the morning. My friends just can't get up that early. Barely could myself, but at least I had in my mind the possibility of the centennial activation, so I was at the station still in the dark, and a bit disappointed by the completely overcast sky.
Fortunately by the time I reached Azuga the clouds started moving around giving hope of improving weather. Opposed to last time, I was taking the more direct approach to the summit, the trail marked with blue triangle starting just a couple of hundred meters from Azuga train station. This trail goes up to the summit, along the ridge and down to Predeál, exactly the route I had in my mind, so it was a natural choice. And the trail marking is excellent, it was very easy to follow even with the fresh snow layer from the day before. 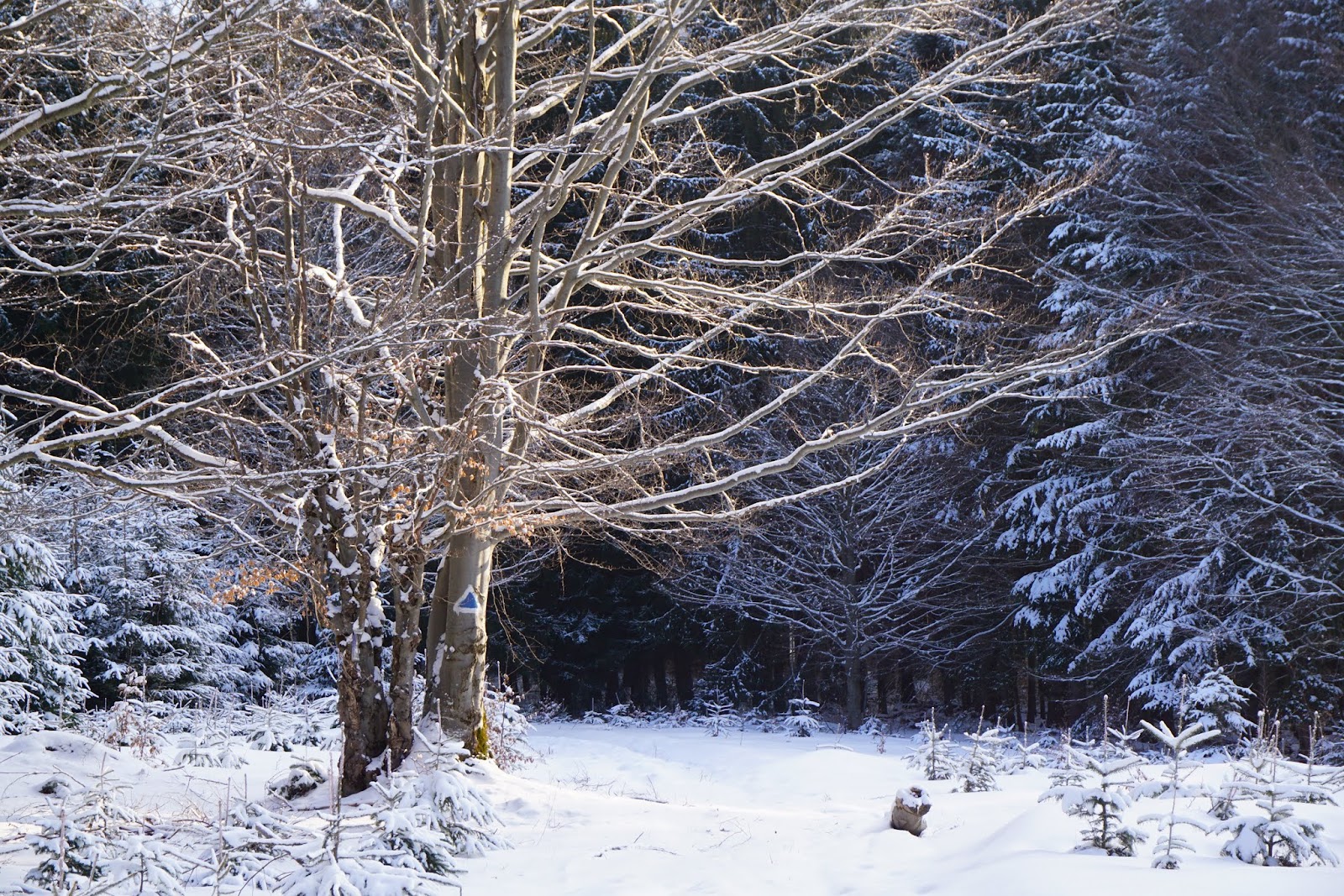 So I set out in solo, treading the snow with no other footprints (well this was expected after the yesterday snowing and the early hour). Soon after I started the sun finally break through the clouds, enforcing once again my expectation of good weather for today. 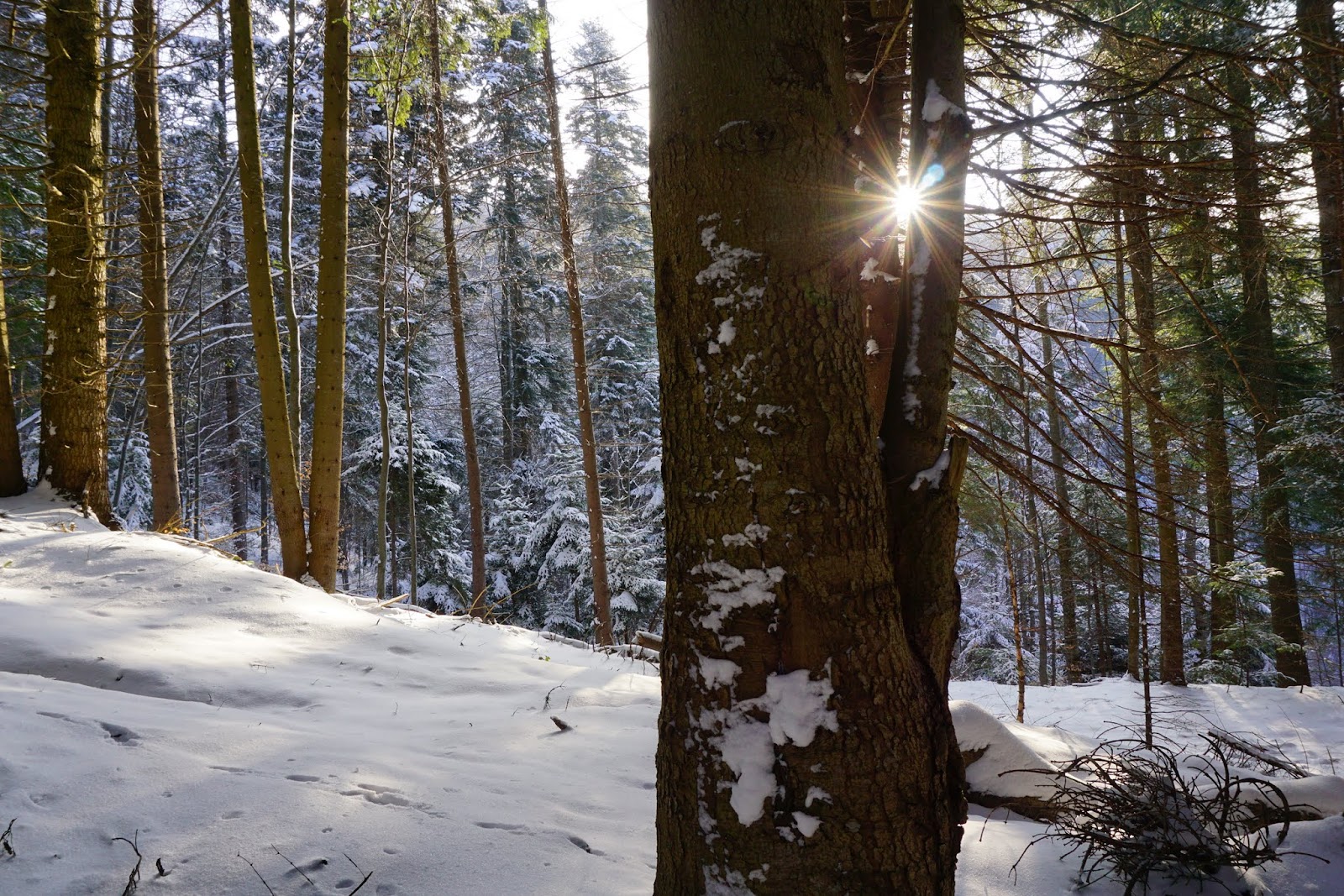 It even started coloring the forest with spectacular morning light, really encouraging on the long hike up: 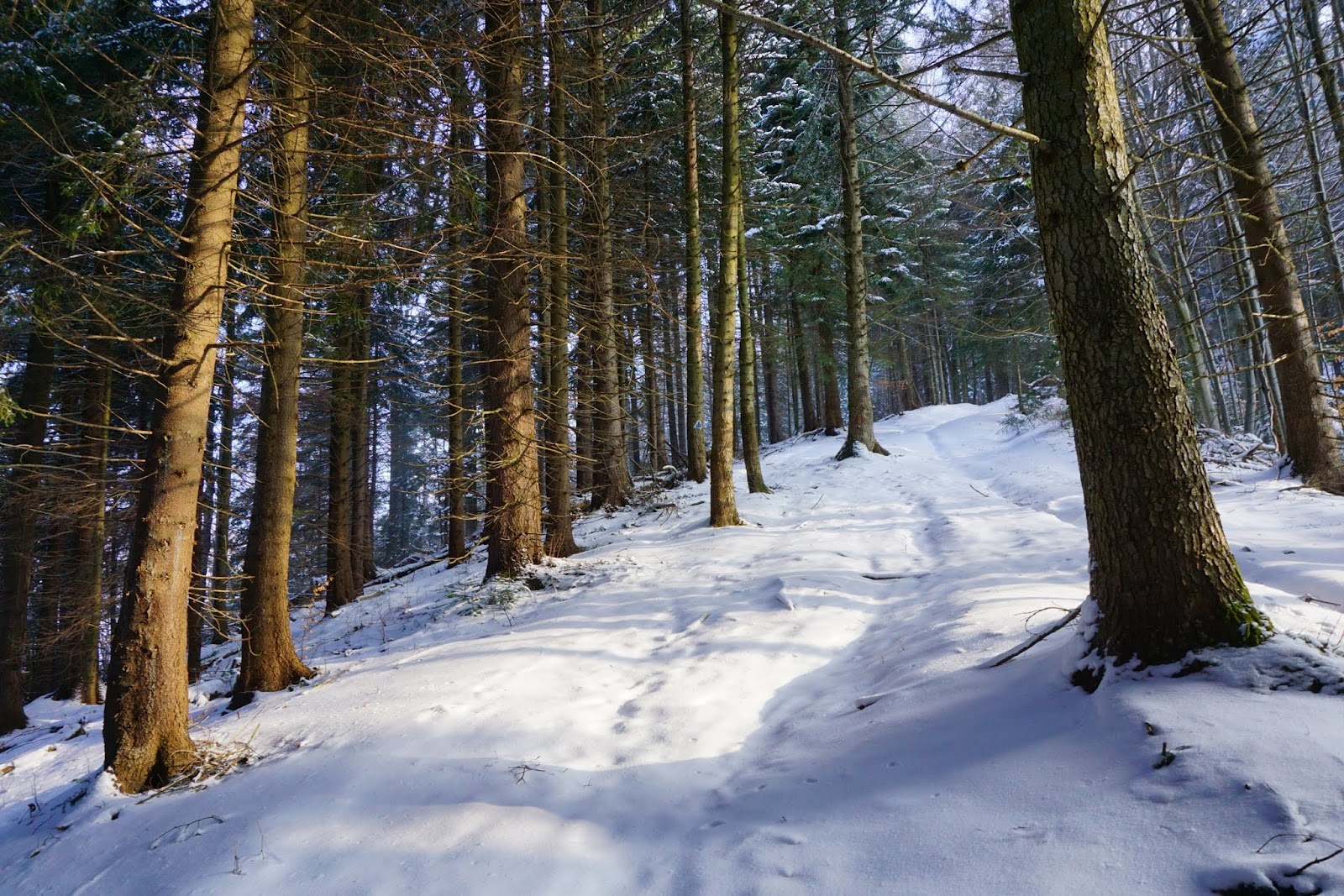 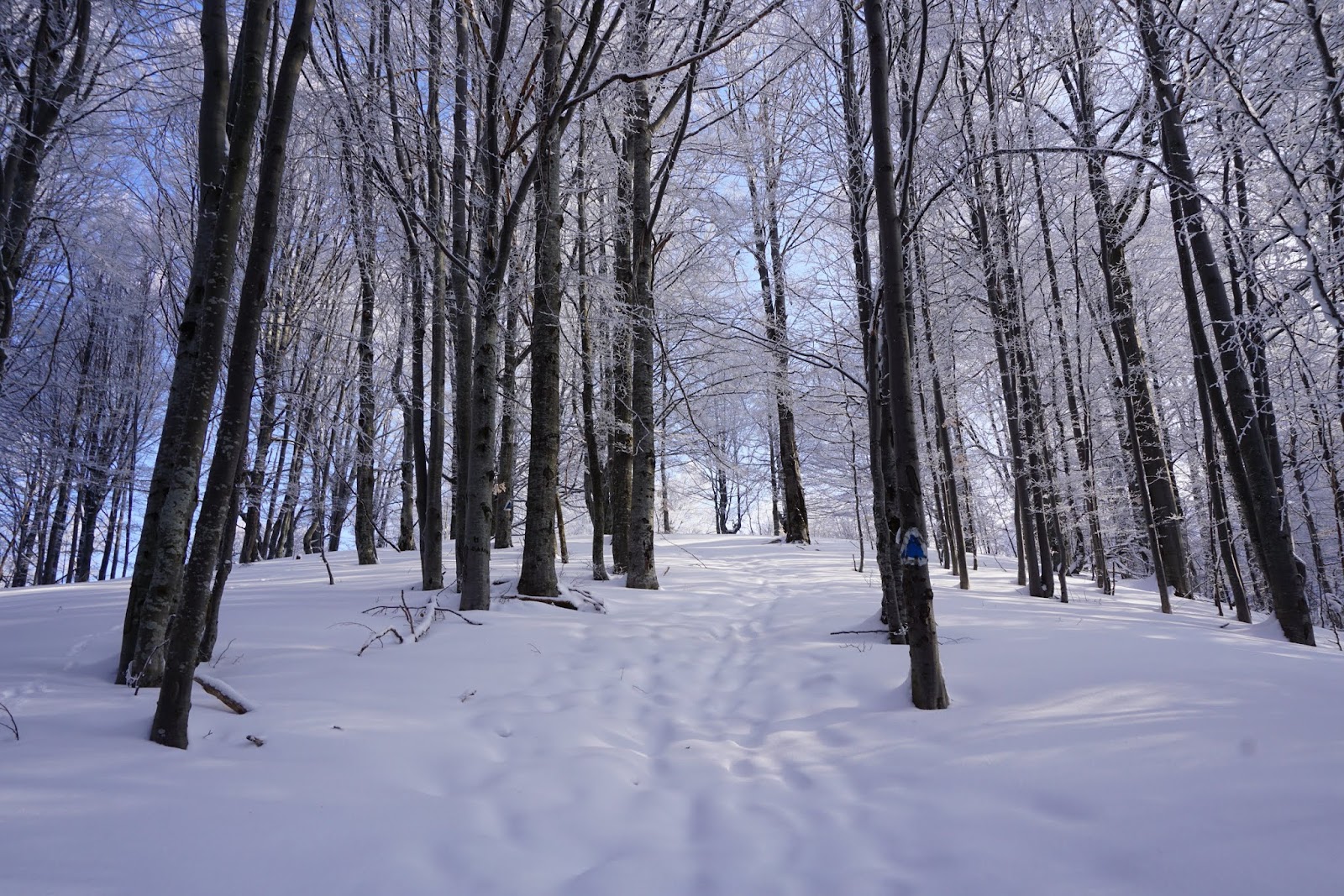 But of course that is misleading as there is still some more climbing out in the clear. To make it worse out of the tree cover, where the winds have their word, the snow got ticker and needed some serious breaking in 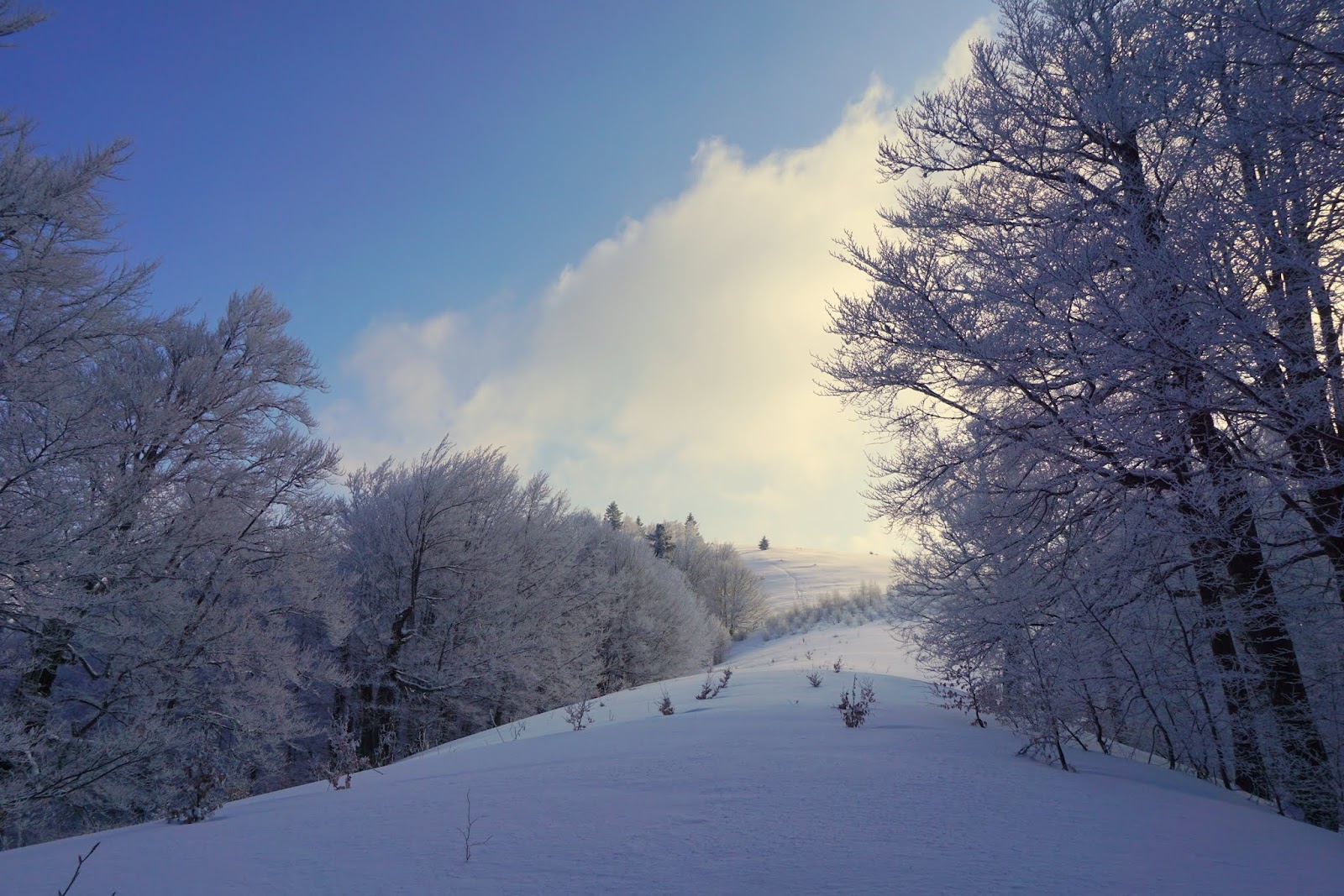 But as the sky started to clear up, it was well worth it, the amazing panorama around compensated for the tiresome advance. 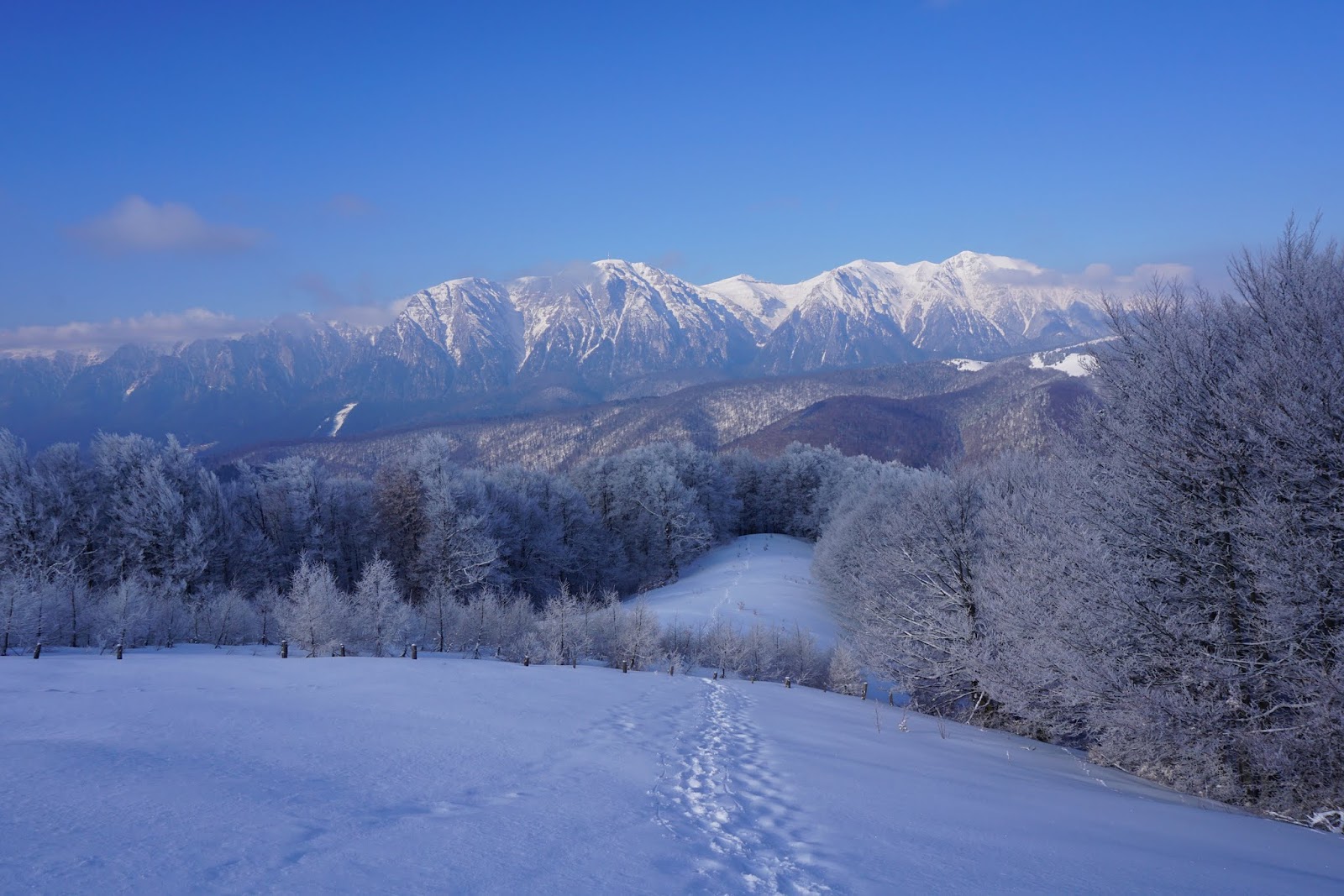 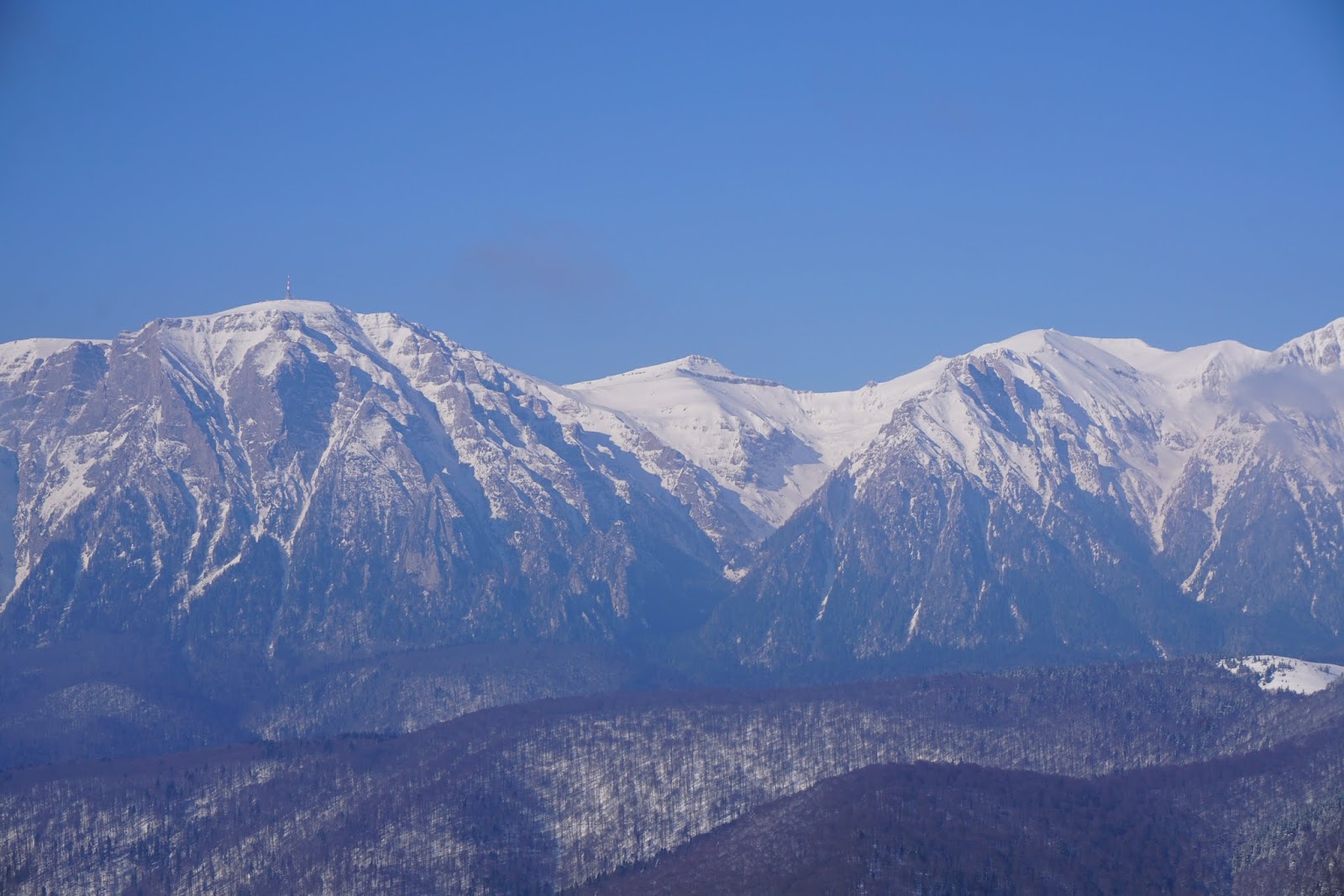 Except when it is freezing out there. And unfortunately it was. I was just a bit too early on the summit (one and half hour hike instead of the expected 2 hours), but still too early anyway, and it was very very cold. The sun was getting out of the clouds, but I recon it still needed an hour to warm up the weather to a pleasant atmosphere.
So in full clothes, with everything on me, I built up the station and started calling. Not to many takers this early, but fortunate enough for 2 s2s contacts. And afraid it was just to early for VK, I was really hoping to catch an LP window, but again I think I should have come an hour later. It would have been much warmer and probably in time for the window. 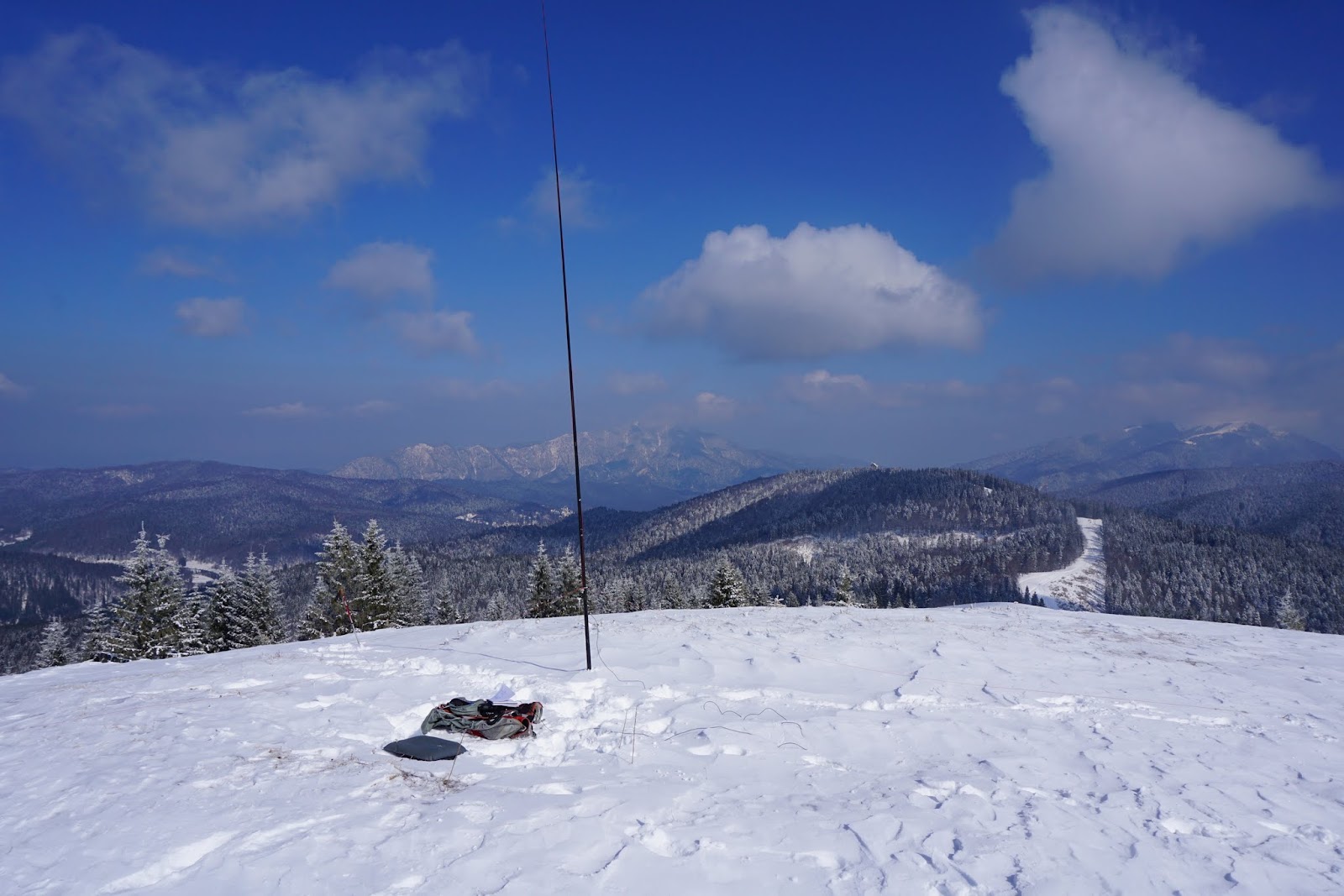 But that was it after about an hour of stay on top, I was really started freezing, so I went QRT, and after a few more photos of the panorama and the way in front of me, I started the descent towards the Gârbova hut 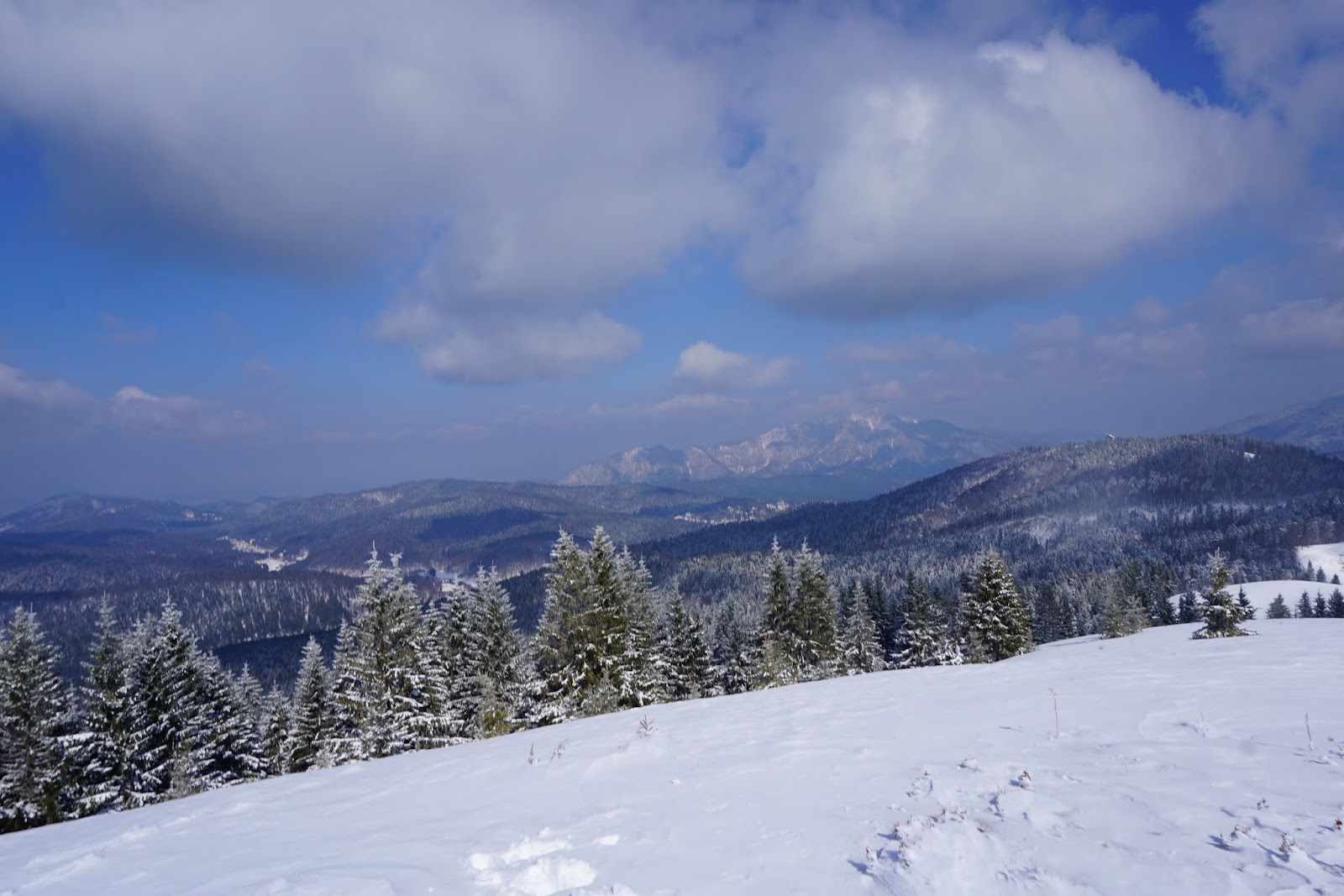 where a nice hot chocolate brought me back to life. From there another climb followed up to the Clăbucet Plecare (the high point of the Predeal ski slopes). On the way up I had this insight to just look back a bit to the hut, and it was quite an amazing view with the summit from where I came behind the hut, and my solo trails down on it, nothing else was seen in the fresh snow. 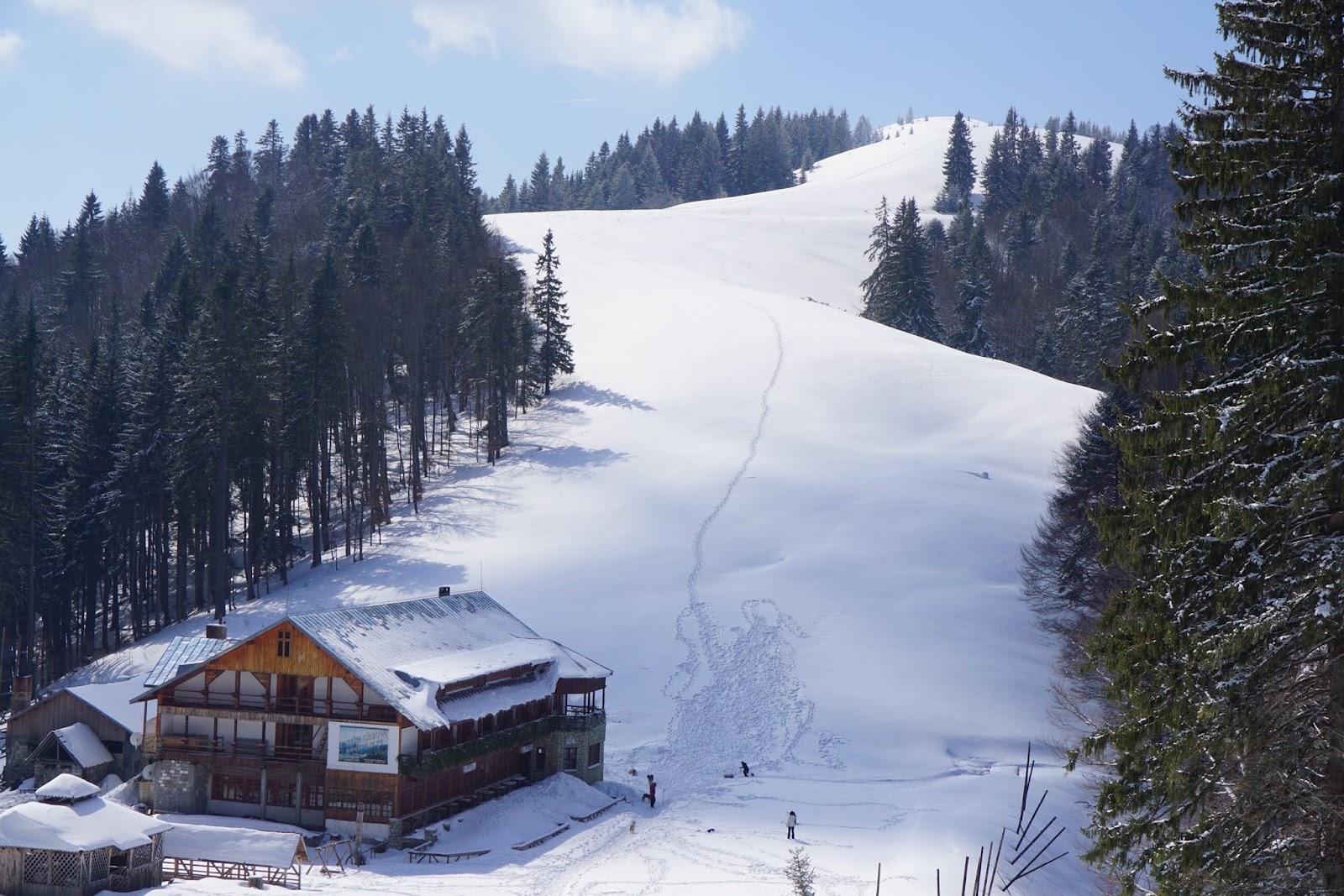 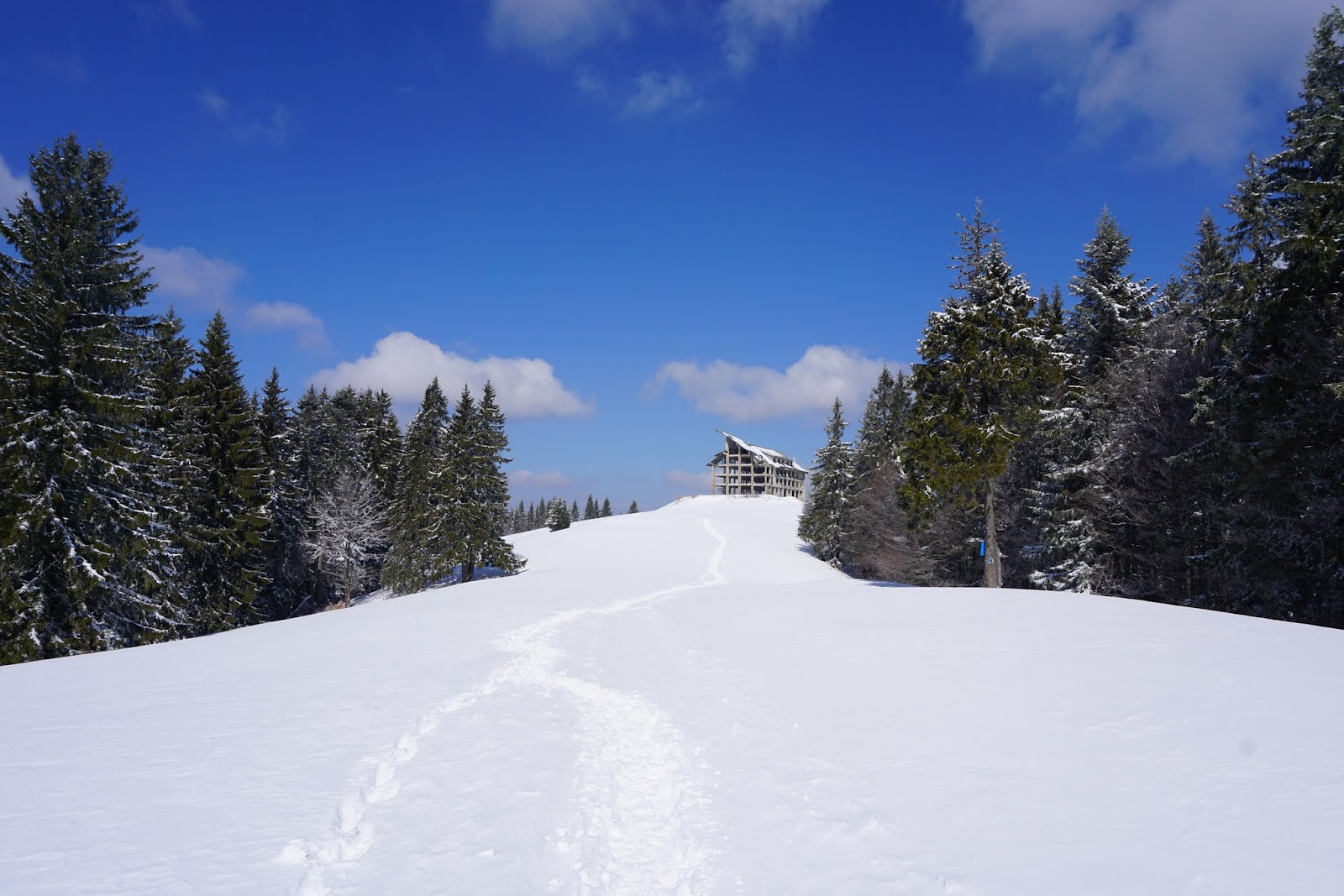 This is also the point where the ski-lift from Predeal and 3 slopes start from here. 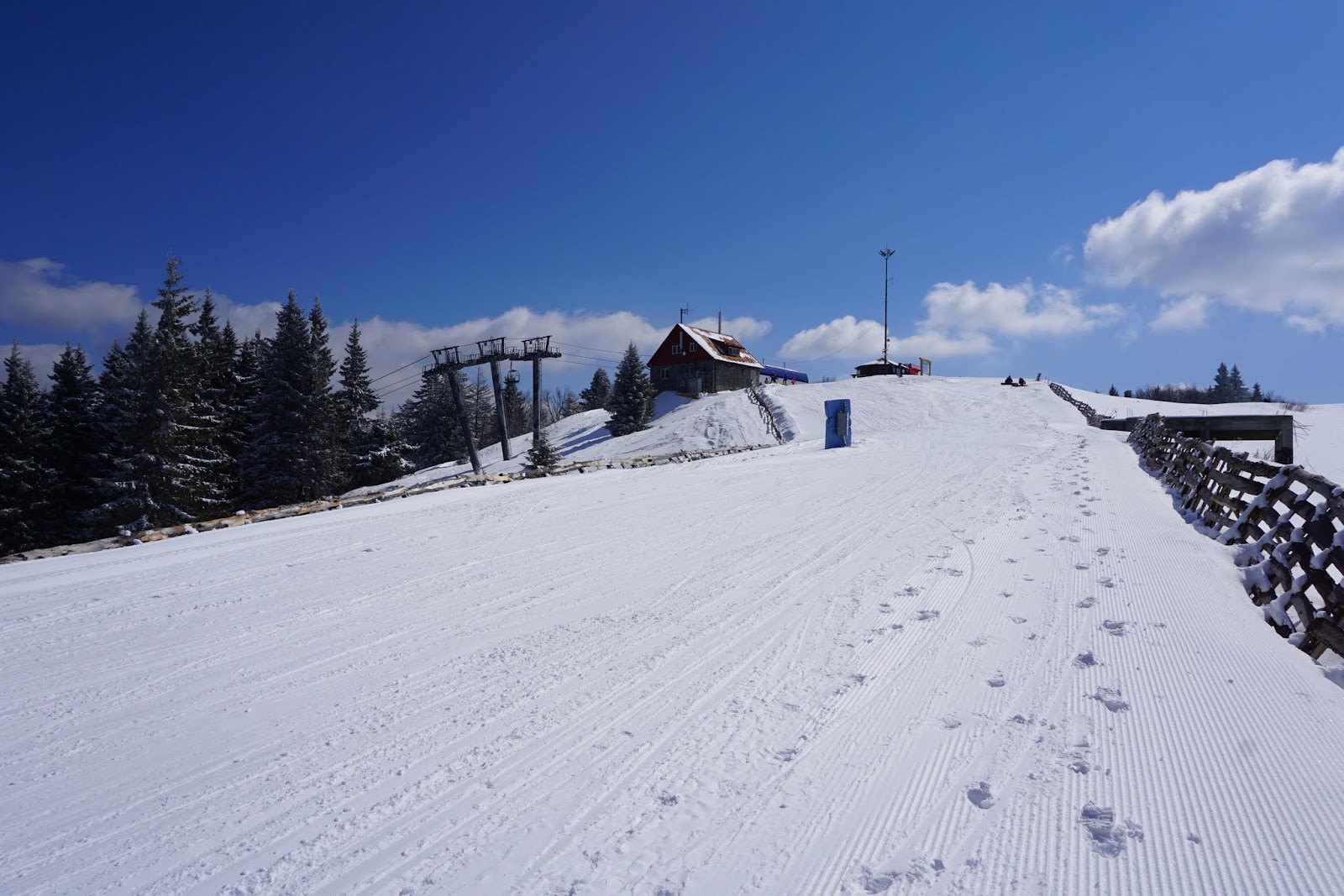 The blue triangle follows the western slope (also marked with a red 1) which is quite steep, making a not too easy descent 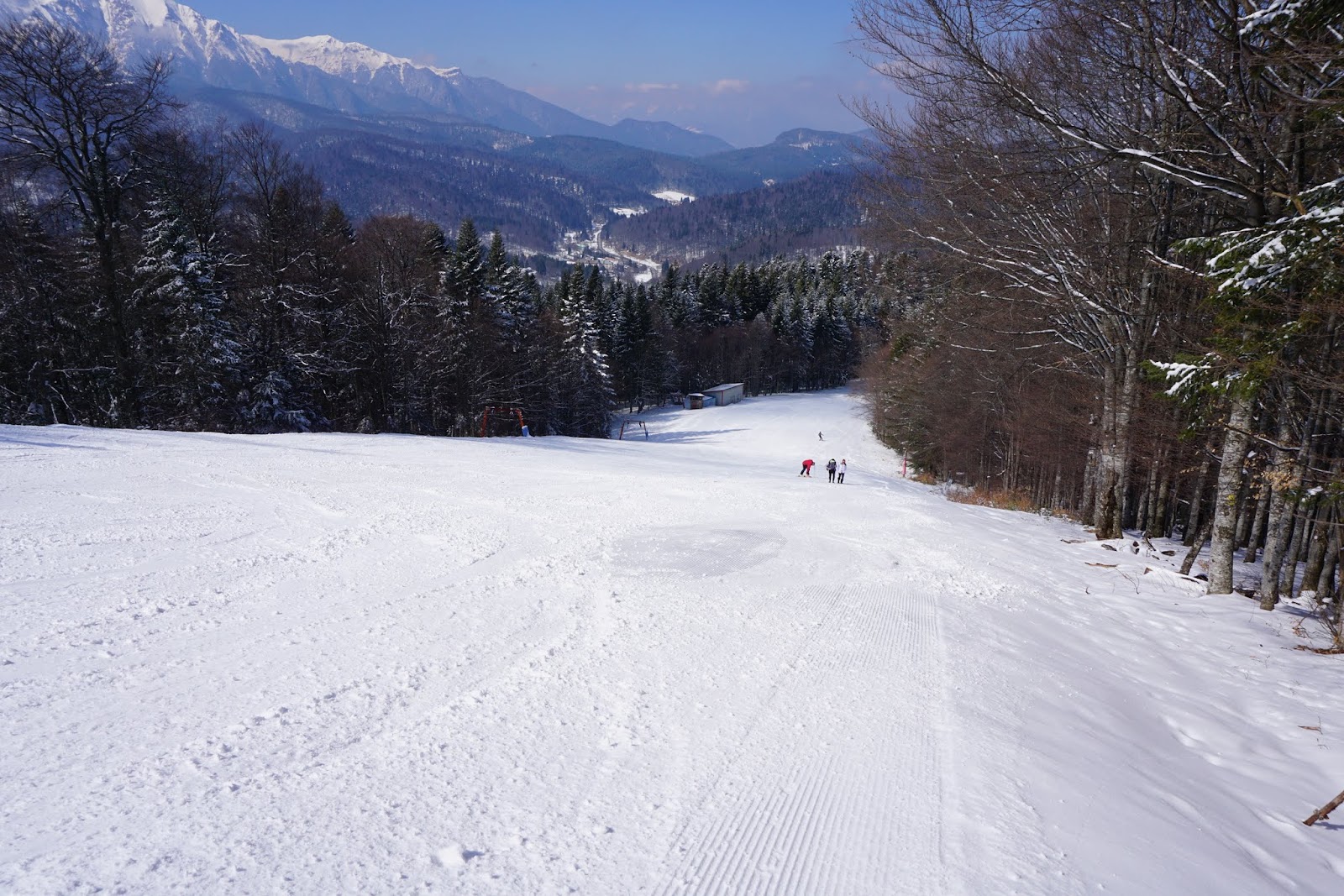 so I was glad that the trail at point break off the slope and went into the forest, having only a narrow path. 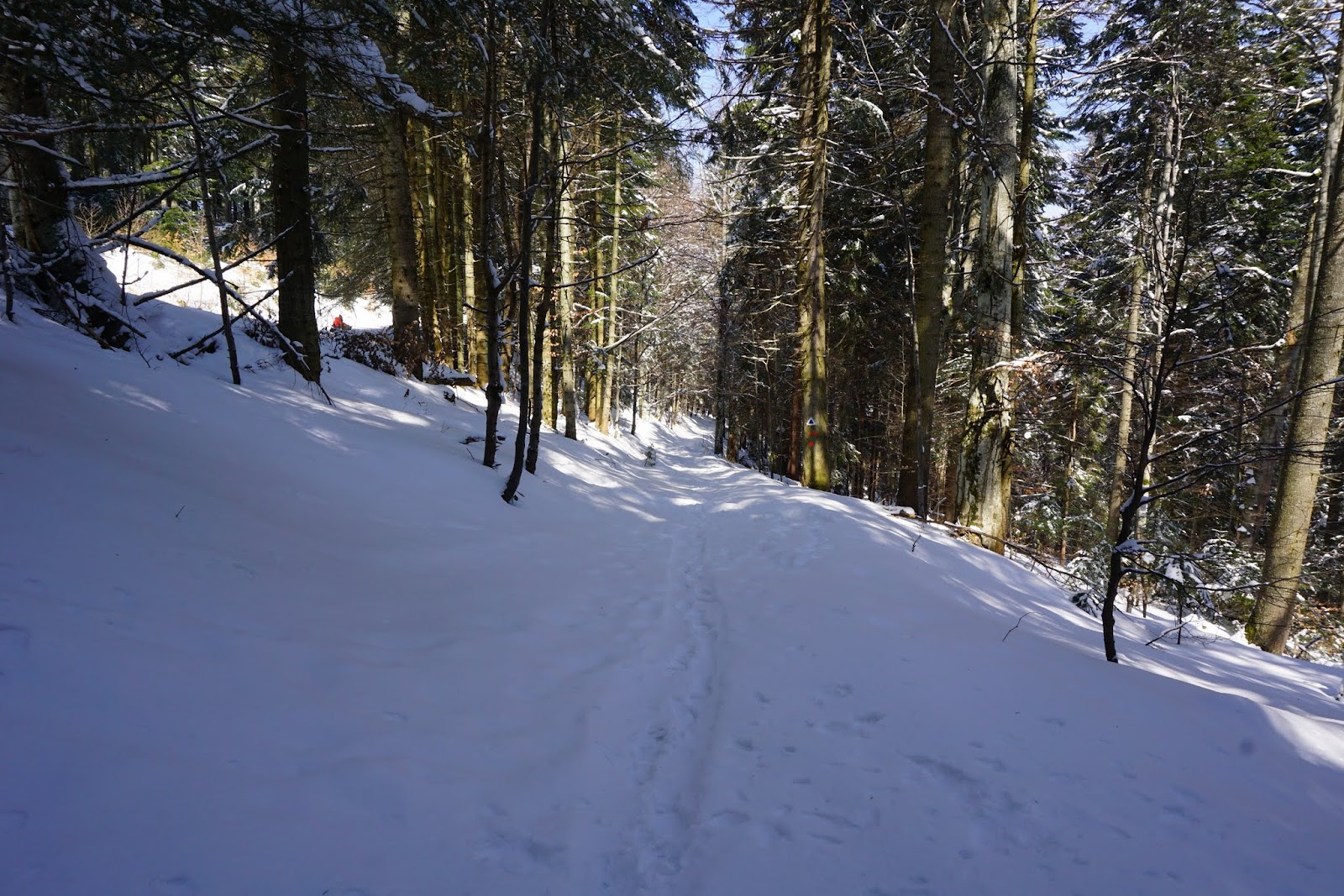 Well my joy went away quickly as I realized that below the fresh snow actually the path was one continuous ice block smooth as a glass. Probably the most terrible descent of the day. This is definitely a no go in winter conditions.
I was really glad when back at ski slope finally had an outstanding view over Predeal. 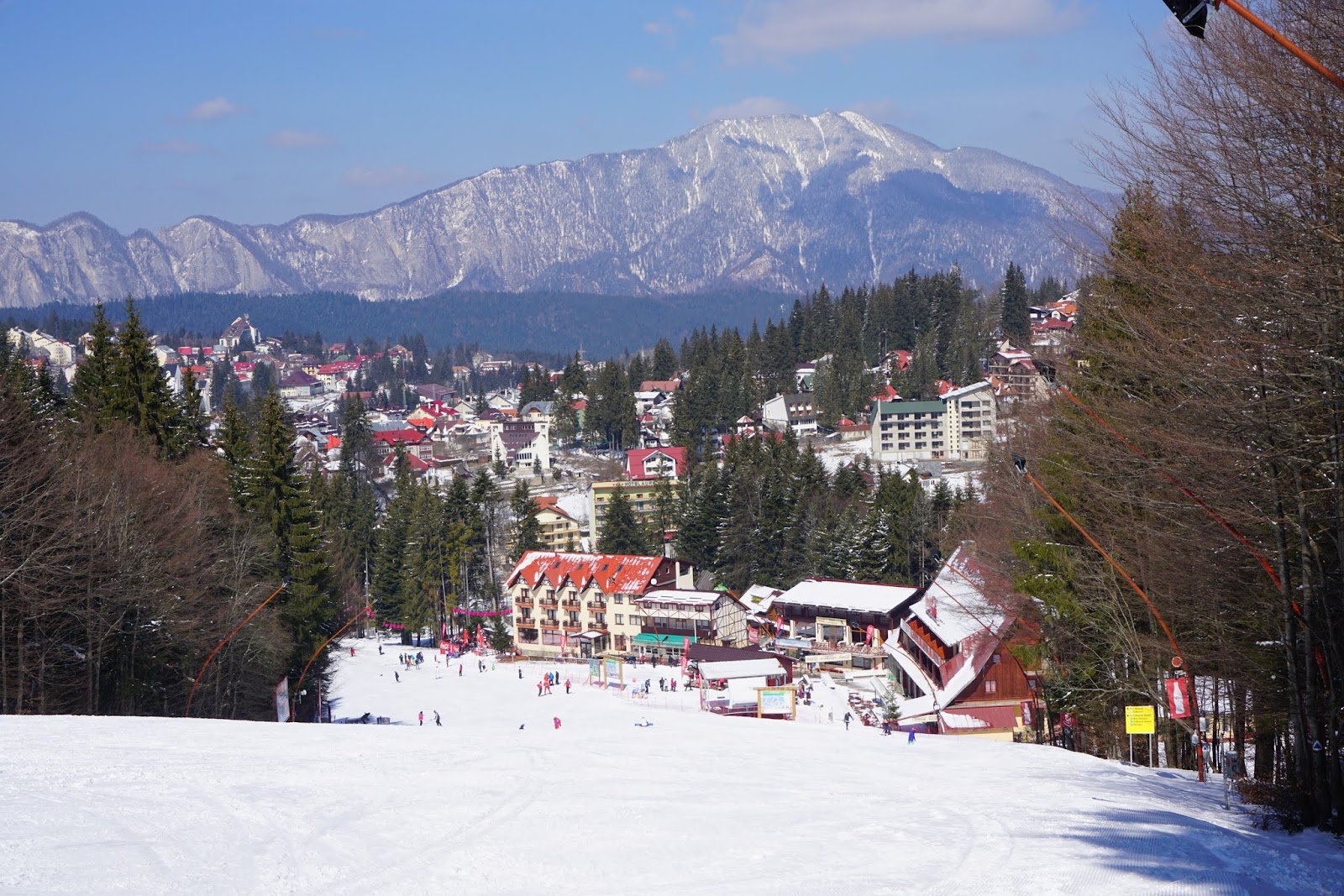 From there in no time I was down in the city, and already could take a look on my next destination, YO/EC-241 and my number 100 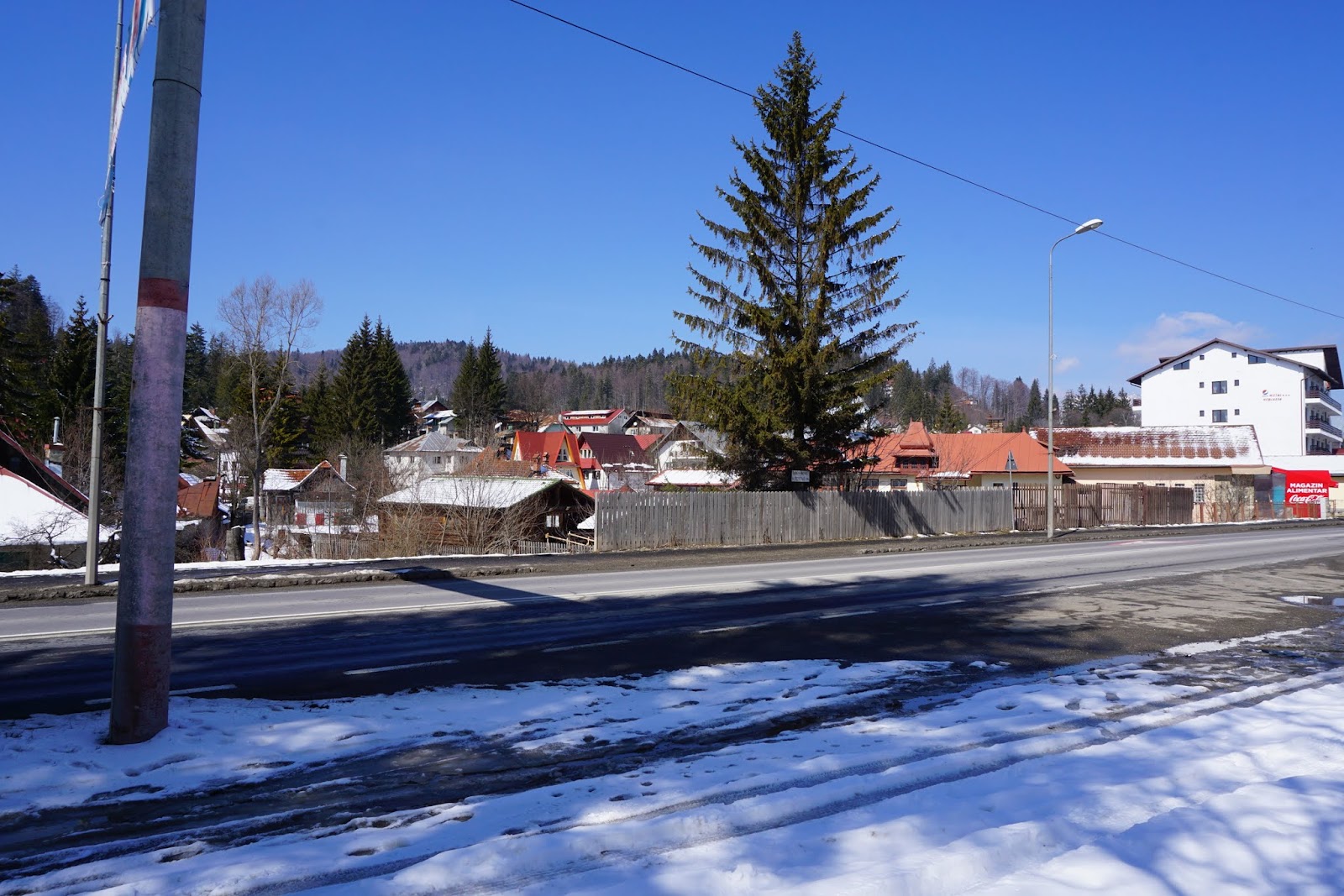 But until then another 3 km of boring city walk until the another end of Predeal, before I could set foot on the trail marked with blue cross. 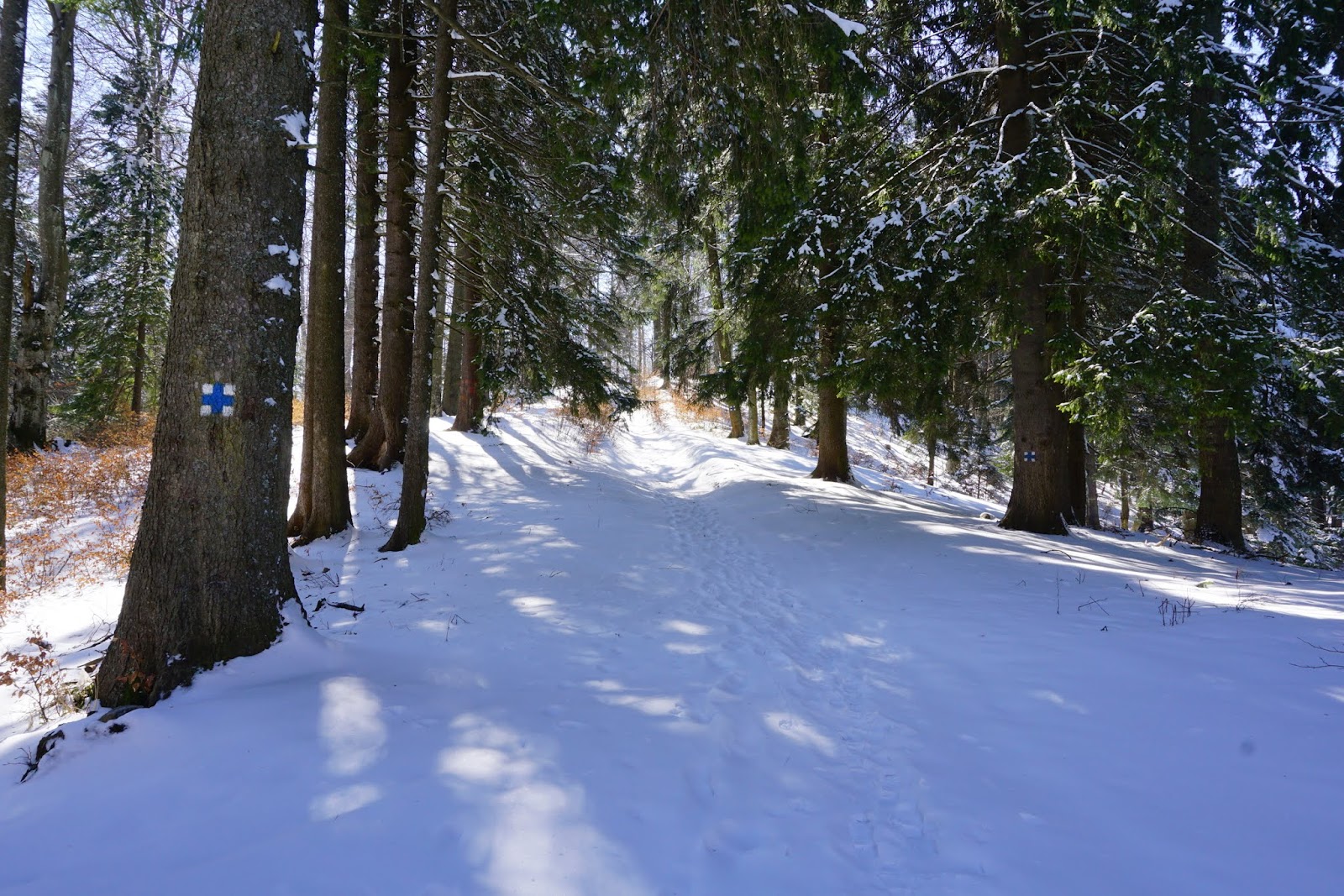 Well isn't that a different scene from last year? And my last year activation was about the same time of the year. And still then it was everything dry, in flowers, warm, and now it is plain snow. Ok the temperature was not bad this time either, since leaving YO/EC-145 it did steadily rise, so when I arrived to the summit it was quite comfortable, so I could easily had all the time to work all the chasers.
This time I erected the antenna right in the middle of the summit, which I avoided last time because all the motorcycles crossing by, well now it wasn't any danger of that and the snow was the same everywhere 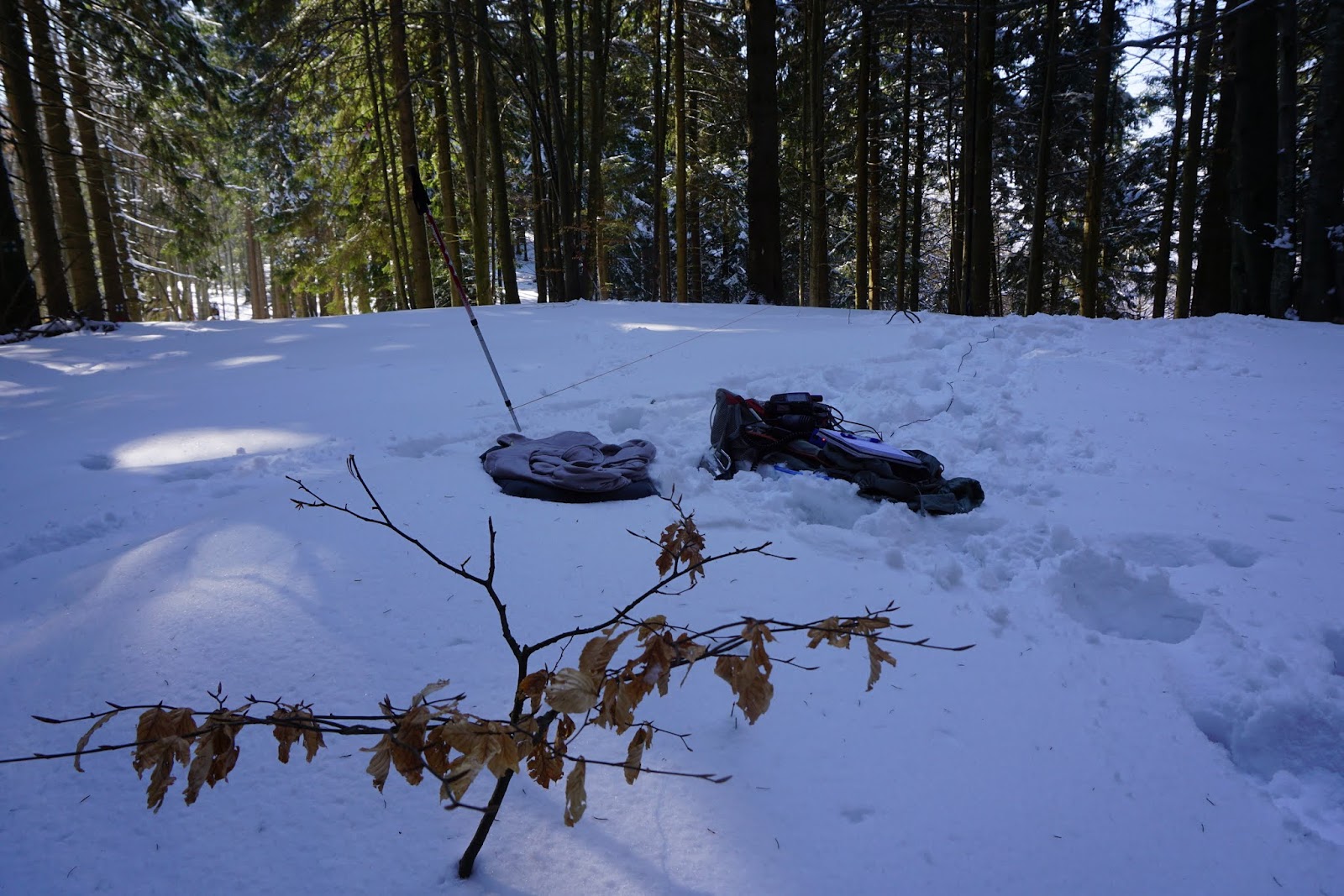 At least I didn't needed all the pieces of cloth this time so I could made a nice place to sit down. 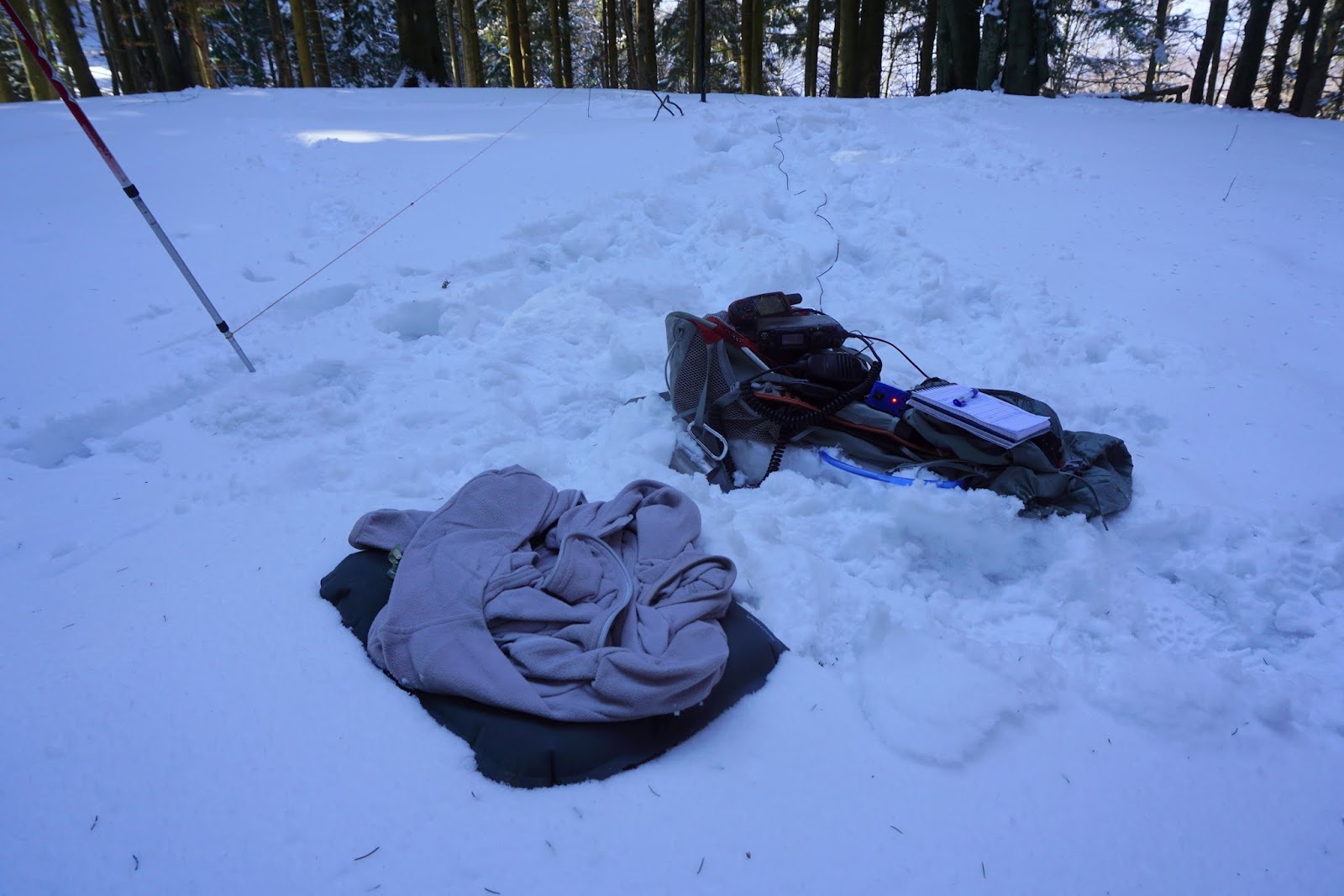 This time a much bigger pileup awakened when I spot myself (regarding this my spot first went out with the reference of last weeks summit, that was strange from the spotting app, but quickly rectified it, I hope it did not cause too much confusion).
I stayed until the pileup completely went away and even after that gave enough time of CQ-ing for any late comers. Much better weather than in the morning.
Still after silence for a while, and when the colors of the forest started to mimic the one from the morning 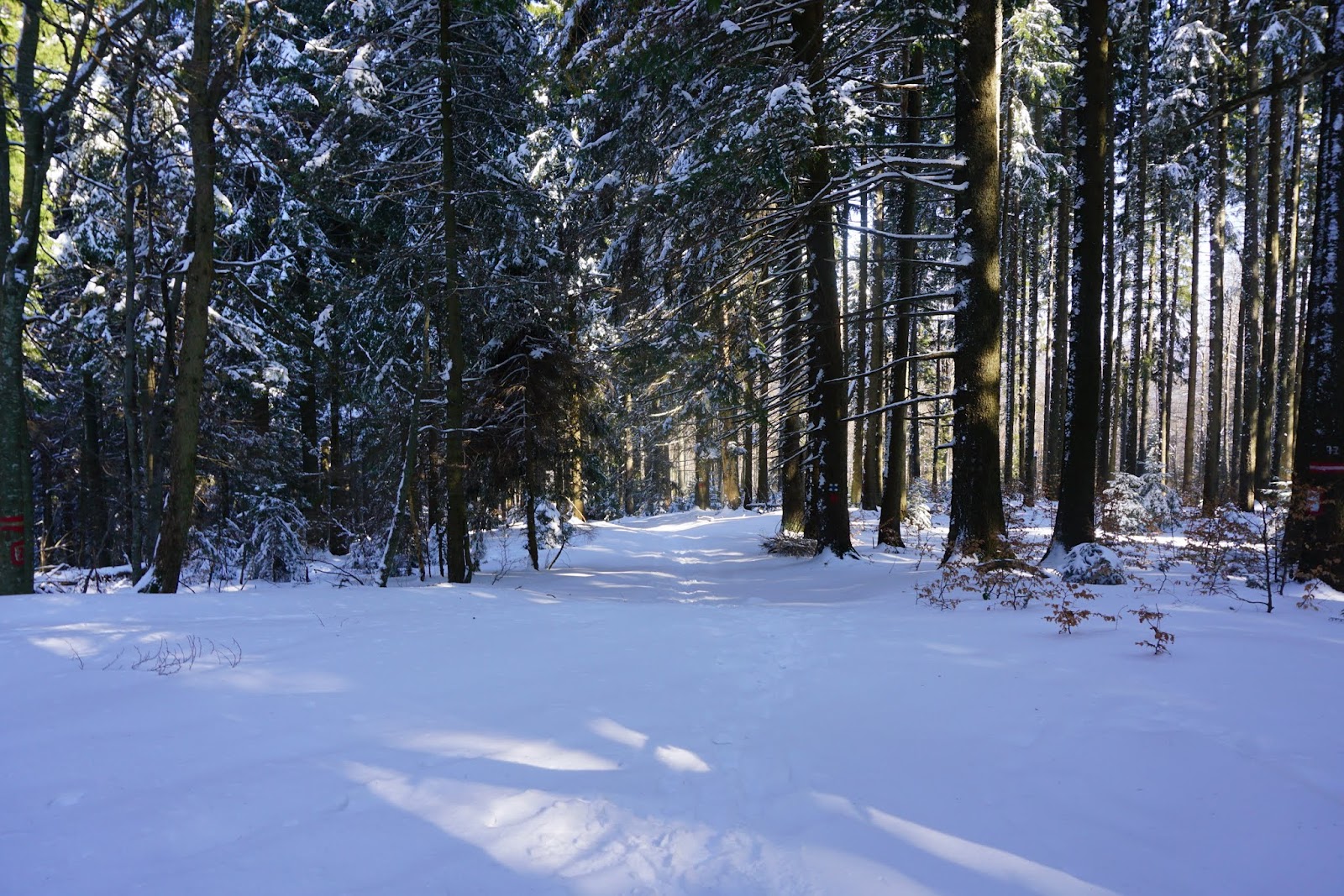 I decided it was time to leave the summit behind (and also the Sun already on the other side, but still shining through just as in the morning. 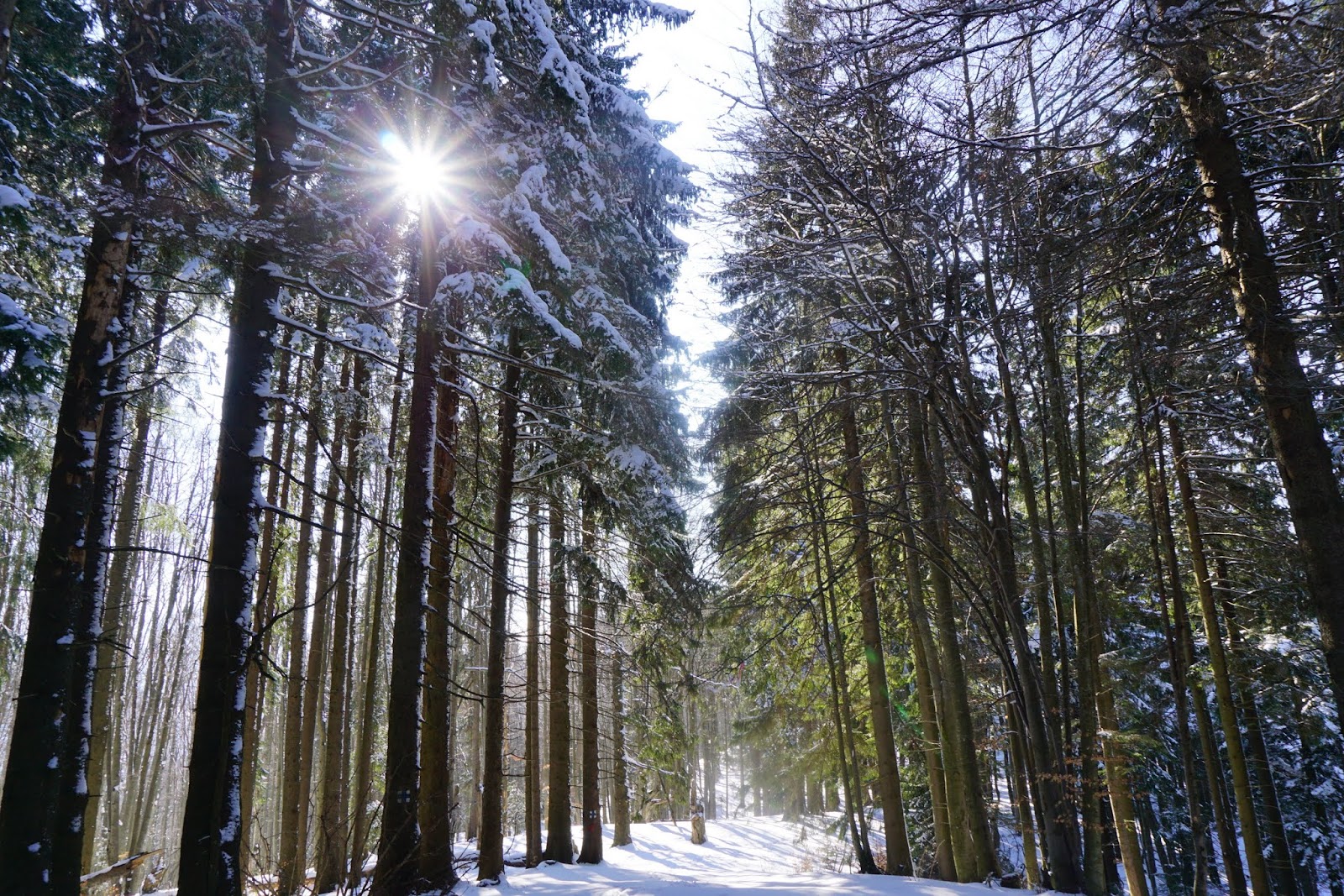 Another half an hour of descent until the Predeal train station, and with my luck a train just pulled in exactly the same time. Just exactly to by a ticket and get on it. So I did actually get home much earlier (still in the daylight) then on my previous outings.
Oh, and as I usually give the track for the summits (but already have given for these from the last time), I just put here the whole route for today 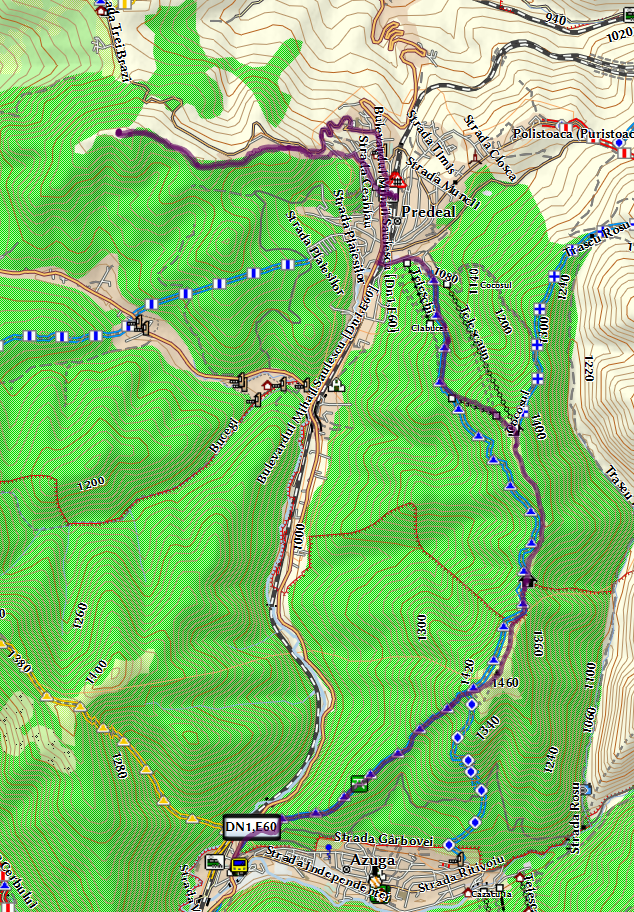 A total of 18km hiking, with 1200m total ascent and a little less than 9 hour for it. Quite nice, again something I wouldn't dream of when I first went on a SOTA activation.

So thanks again to all the chaser from this 100 time, and let's meet on the waves for the next 100 and many many more.
Bejegyezte: YO6PIB A bejegyzés időpontja: 21:20