Yesterday another hiking day for our usual team, Sorin, Barbu, Mihai and me went looking for some hills in the area. Weather forecast was not too optimistic so we decided on some smaller hills near the Buzău (Bodza) valley, YO/EC-328 and YO/EC-328.
For the first one the choice fell on YO/EC-328 as it is closer to the main road, and we were also expecting a good portion we can get by car on a forest road which showed up on our map. Well we couldn't be more wrong as we were not counting that the snow was still melting down in the darker valleys and the road  was just a sea of mud: 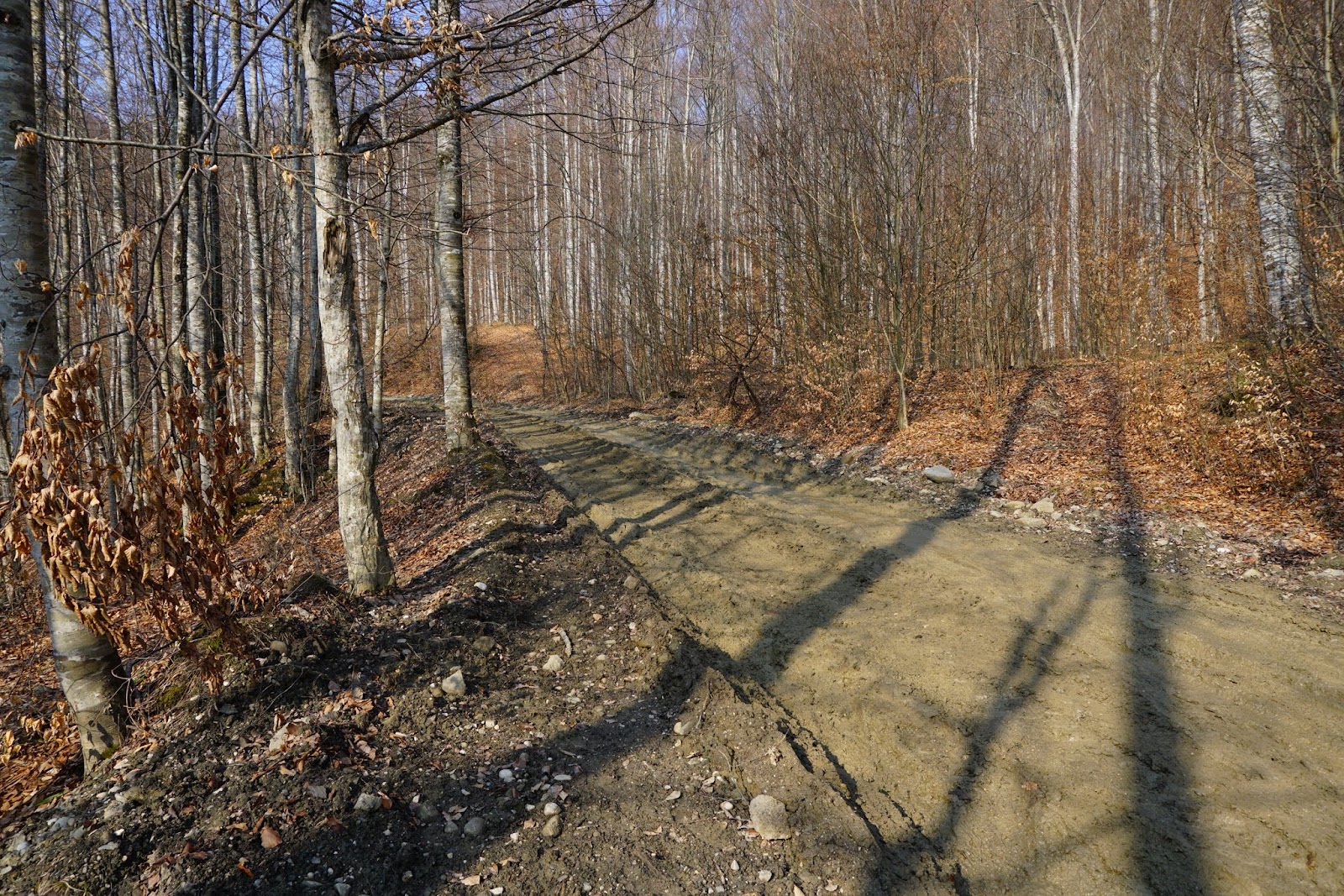 So we had to ditch the car and go on by foot which wasn't very thrilling either, so at the first opportunity we entered the woods on the basis that is much more pleasant to walk in the autumnish looking forest (not too much sign of spring yet)

An easy hike follows in the forest, rather gently slope to climb, a young oak forest and also opposed to every forecast an excellent weather shared our journey.

The summit is at the end of a bit long ridge, and unfortunately on one side and entire slope was cut down, with the bush barely getting over it, which on the other hand proved an excellent shack with a good view to the south-west. A long-long time since I had such a comfortable sitting on a summit: 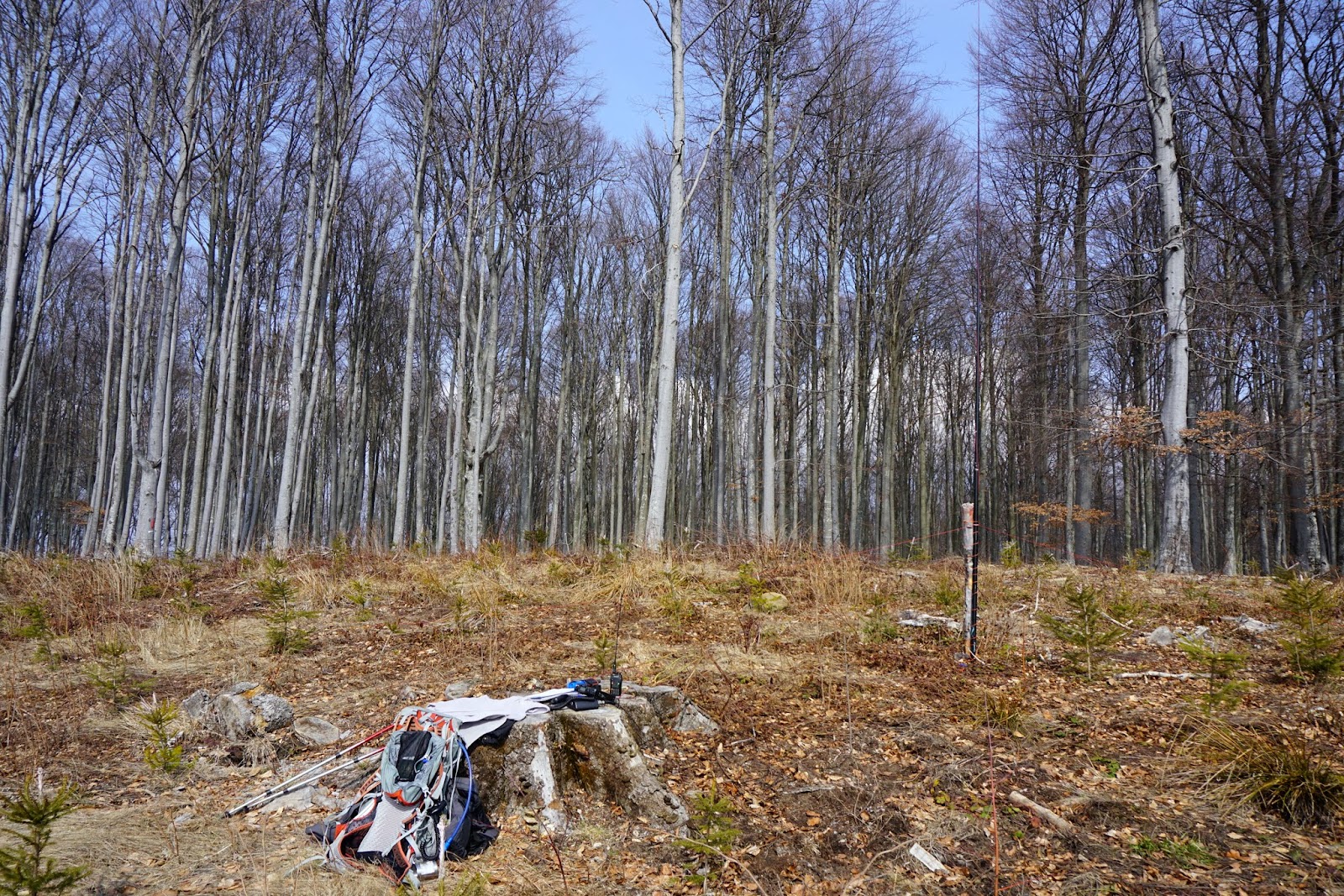 While I was activating, the friends found a slope on the northern side of the summit (not visible from my point) with still a good thick snow, so they went on skiing over there. A long run of QSOs for me with a big pileup at the beginning and a couple of nice s2s at the end. When everything went quiet and the guys finished skiing was time to get back to the car to catch the next summit before sunset.

The summit YO/EC-325 is further away from the main road, but we found a very good forest road starting from Zăbrătău (Zabrató) village along the creek with the same name, which although was muddy, but still better than the previous one, so we were fortunate enough to ride along the 10km road up to the base of the summit. We left the car were the main road takes a U turn and two auxiliary road coming from each side of our summit intersects it. The lesser roads were a mess anyway, so it was time to hike again.
This time wasn't fun however, a very steep slope awaits, about 300m elevation gain on less then 1km distance, and also except for some tree-cutting trails at the beginning we had to go in a very thick pine forest 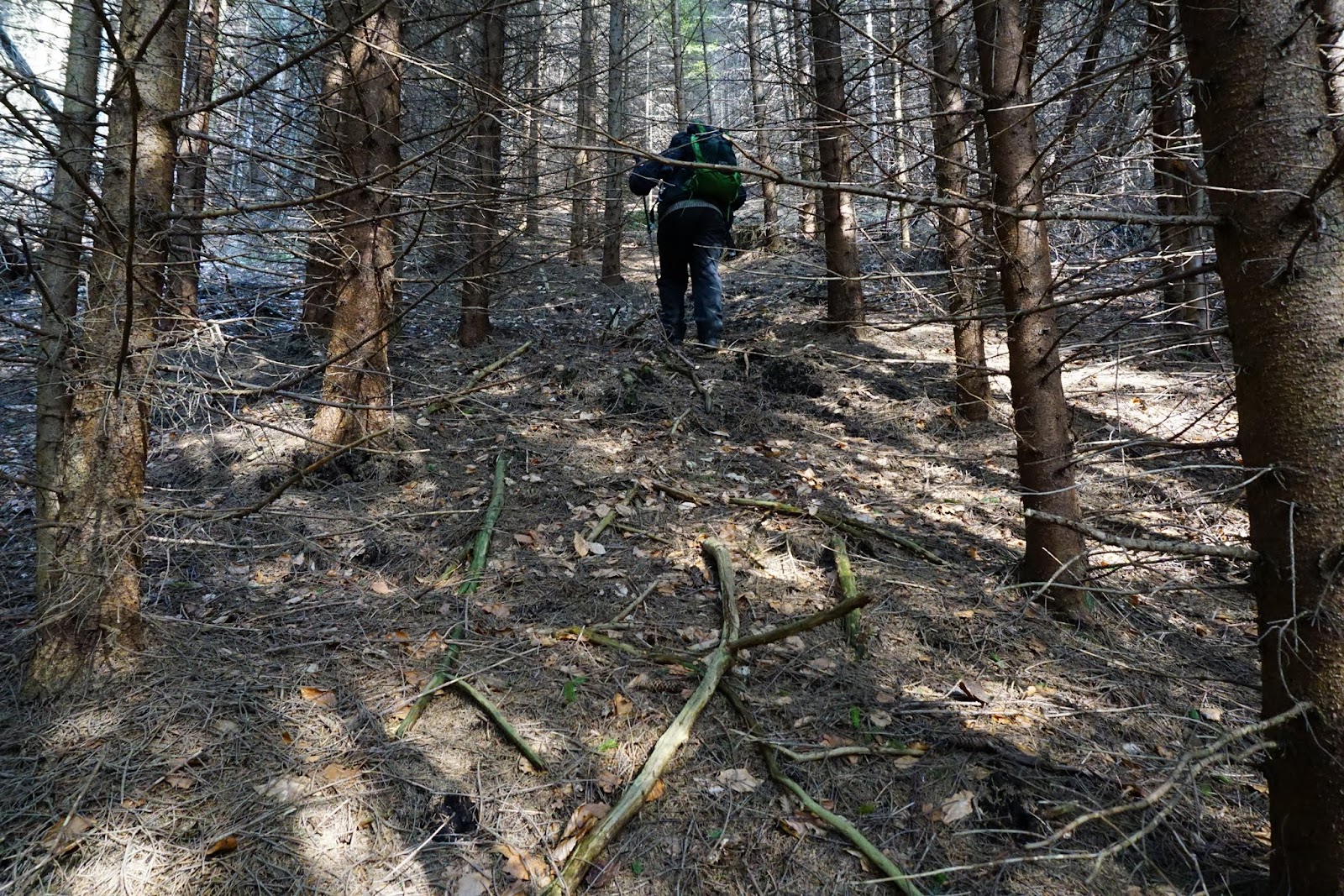 On the first half of the hike we could barely see 3 or 4 trees ahead. Later on the forest got a little bit thinner and also some snow appeared 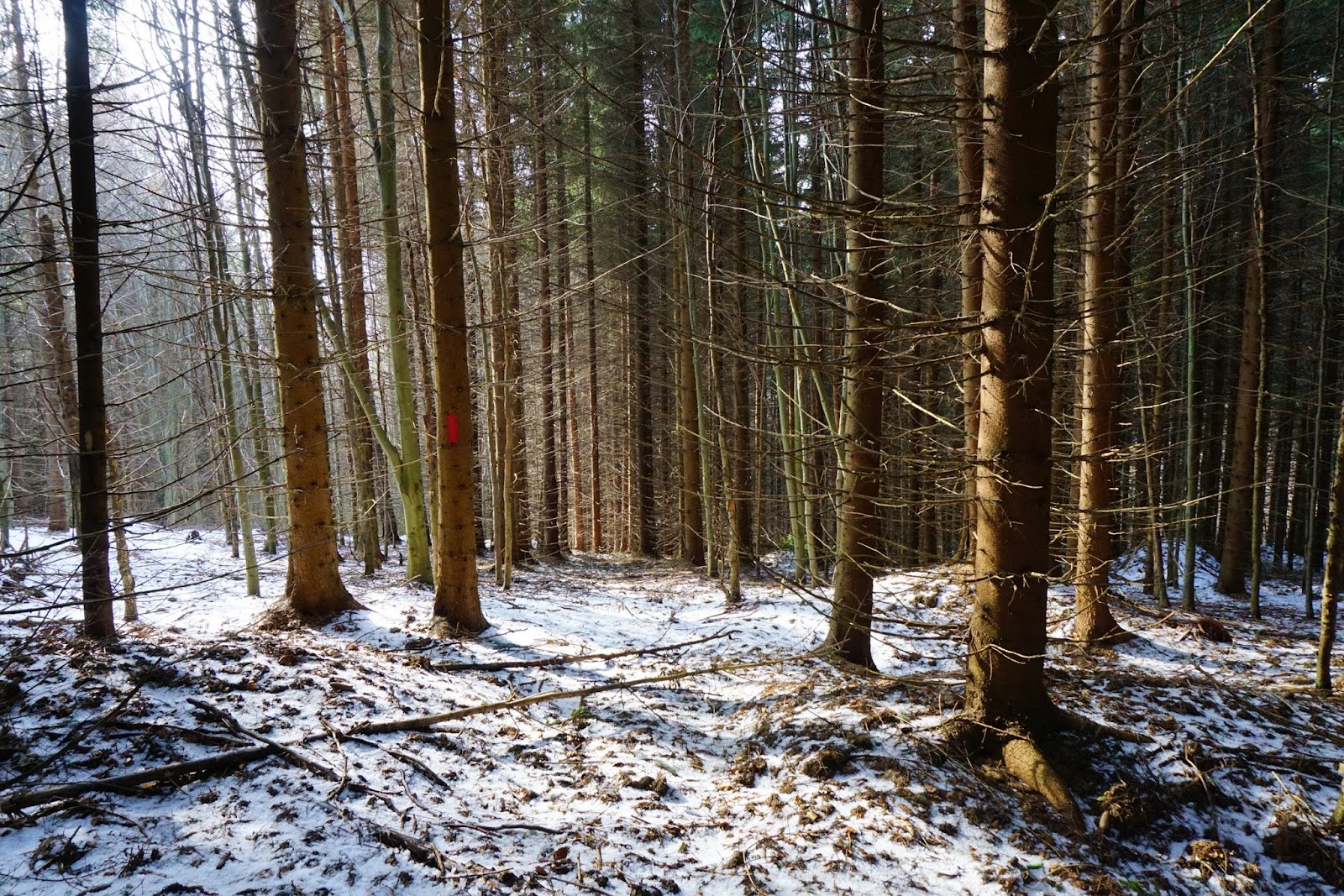 Still it took us slightly above 1 hour to reach the summit (not really spectacular achievement for 1km hike. The summit was much more enjoyable however, with a quite nice glade around, and on the other side we could also have a good panorama. The shack was not as comfortable as the previous one, but still quite up if I were ever to construct a ranking for this. 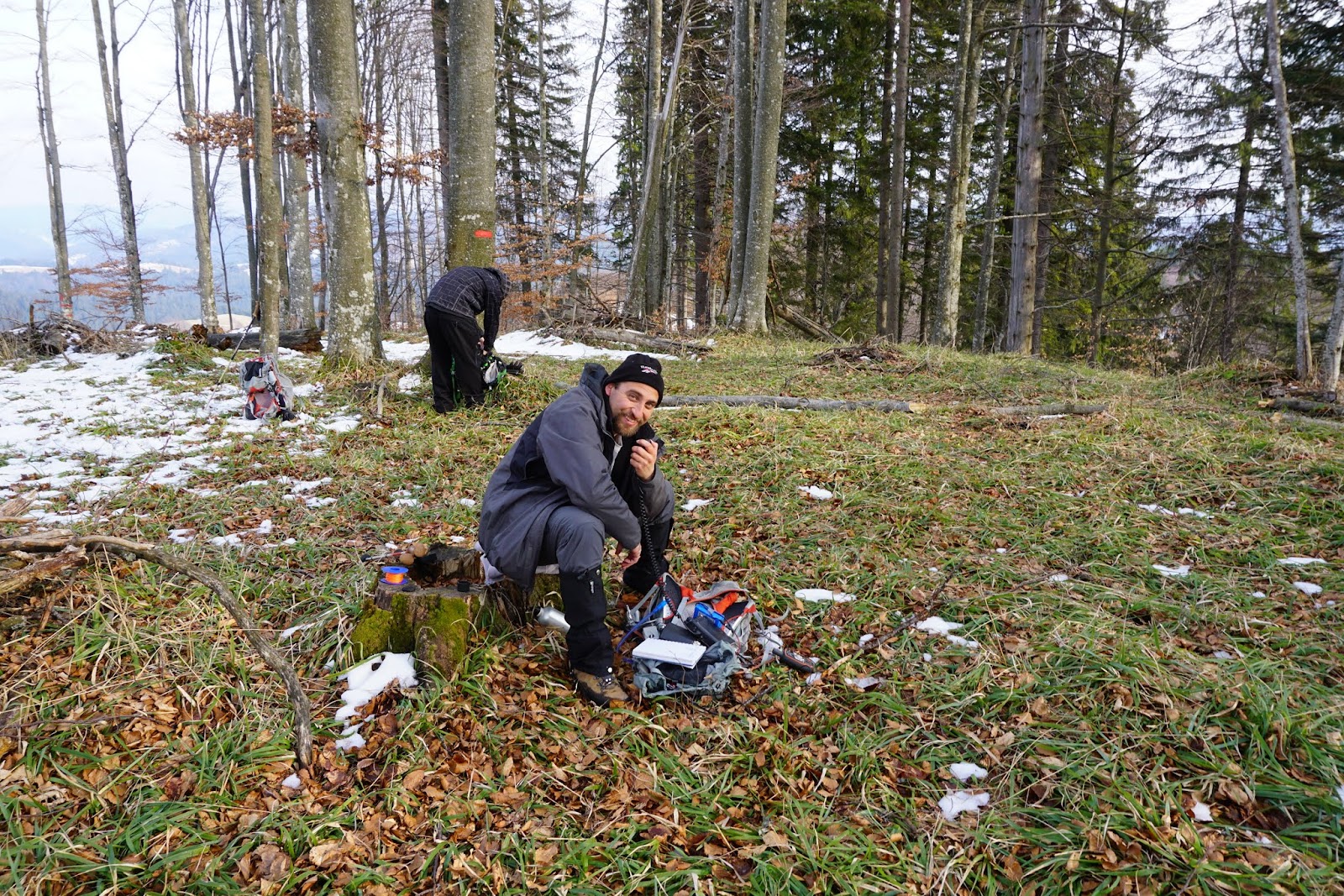 The pileup was somewhat smaller this time, and also some contest QRM kicked in, so quite soon I was out, but being also later than we initially anticipated, that was it for today. The way back was almost as hard as coming up, going down in that thick forest on a steep slope is very tiresome, so we were glad to be back to the car still in the daylight (and get back to the main road before dark).

Probably there is a better way up to the summit going along one of the forest roads cycling around it and climbing up to the large glade behind the summit, and only a small portion in the forest, but that is longer hike, and only advisable if enough daylight is left for it.
Anyway here is the track for the 2 summits, blue marks the trail of the first hike and I would highly recommend it, as even if not on road, it is very enjoyable, the red and green marks the trail for the second one, with red being the road took by car which is also easy to do even in small cars if the weather is dry enough (after rains or in winter-spring condition it can become very muddy), from there however I would only recommend the direct approach we took only to the real adventurous ones, probably there are better ways around it 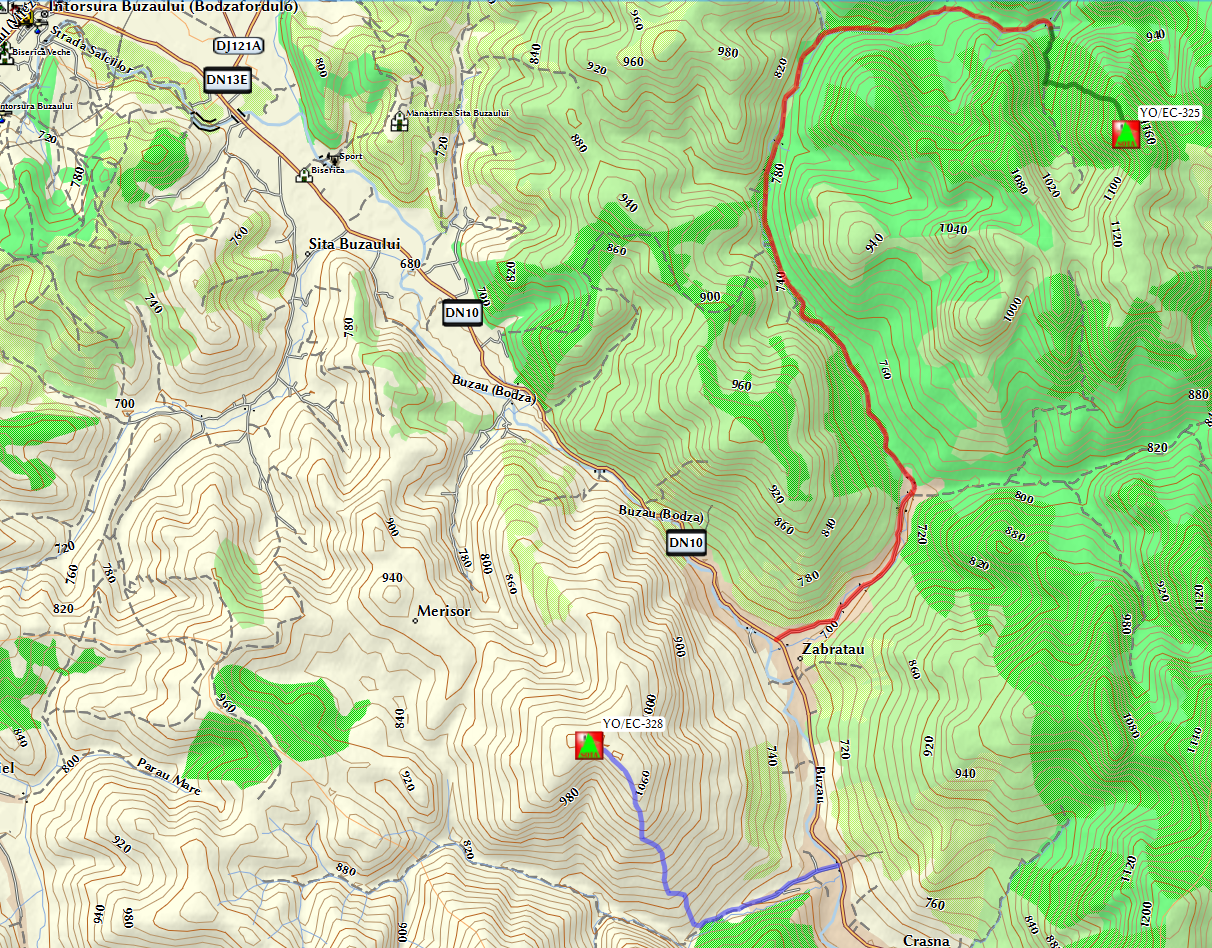