After yesterday good weather (except for that crazy wind), today started to gather some really nasty clouds on the sky, and forecast started everything from bad to worse for the next couple of weeks, I decided to do one more close summit before the rain season comes in which probably will hinder my activation attempts for a while (if the prognosis is right which of course we know that is only a probability game, and well I just have to keep some optimism).
Anyway as the closest summit I managed to activate last Sunday, the next closest one, YO/EC-263, Kőmöge came into picture. This is the highest summit of the Bodok mountains, the central mountain range in Háromszék county, with the altitude of 1240m, so a good a 6 pointer with about 4.5km of hike needed from the main road.
The summit is situated in the northern part of the Bodok mountains, with the easiest approach from the Best Western Bálványos hotel on the middle of the road connecting Kézdivásárhely with Bükszád village on the the Olt valley. The hotel was built right at the saddle point between the Bodok and Csomád mountains, and also the highest point of the road crossing between the two.
There is a large area at the pass, where the car can be left and the hiking trail starts right from that parking just face to face with the hotel. The trail is well marked with yellow stripe, and it was easy to follow even with the tracks completely covered with snow due to the markings on the trees. 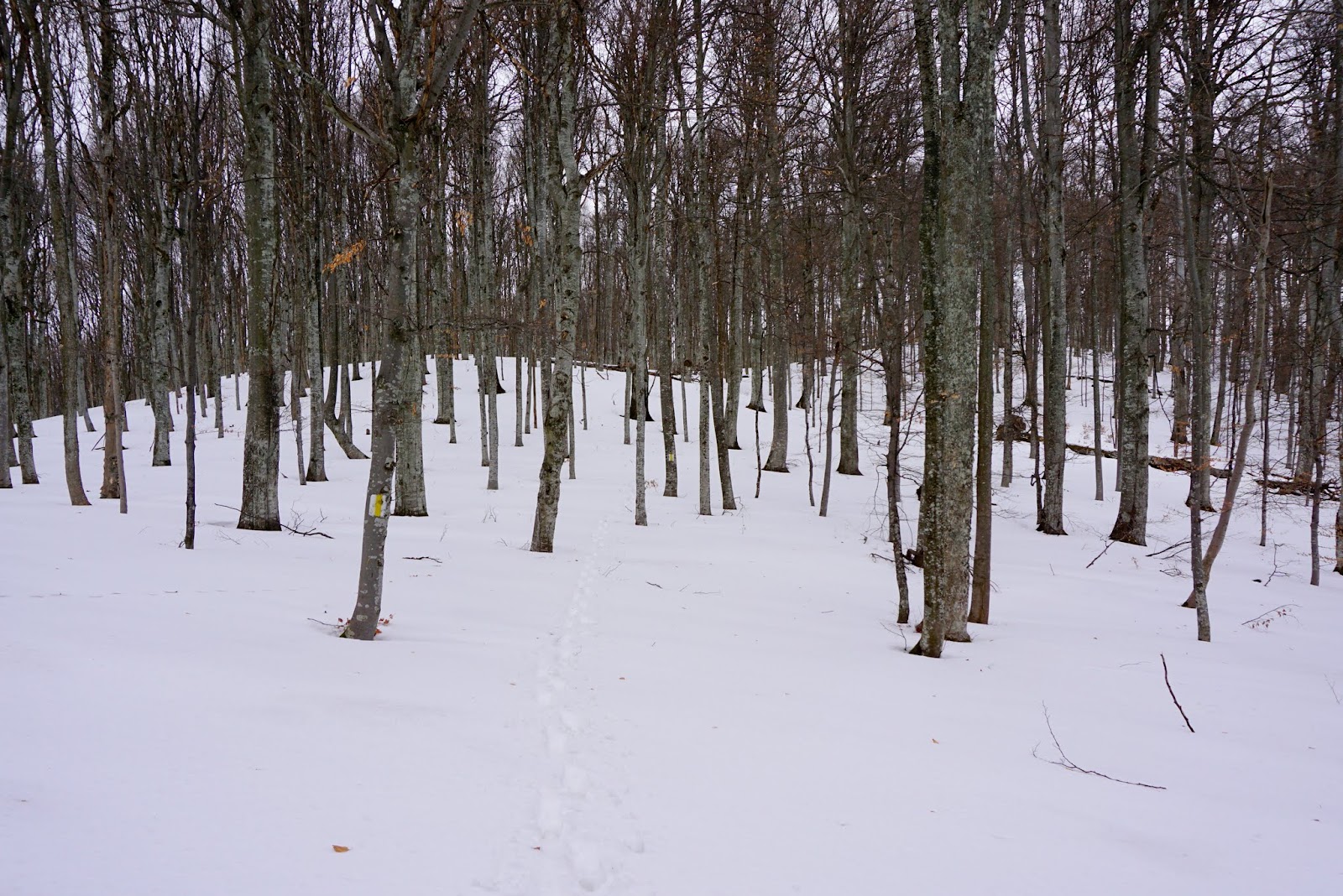 This photo was taken looking back, those are my footsteps. Unfortunately there were absolutely no human trails in the snow before just some occasional animal trails, some small ones and few wild boars, so I had to break my way through the snow. Most of the time that wasn't too big issue, however there were ridge portions with probably some crosswinds where much more snow accumulated and a couple of time I sinking pretty deep into the snow.
The track starts with a quick climb and after that a very long gently rising slope, after which a very tough, very steep climb follows and keeps up pretty much.
After a lot of walking and some more steep climbs finally I was seeing a bump in front of me: 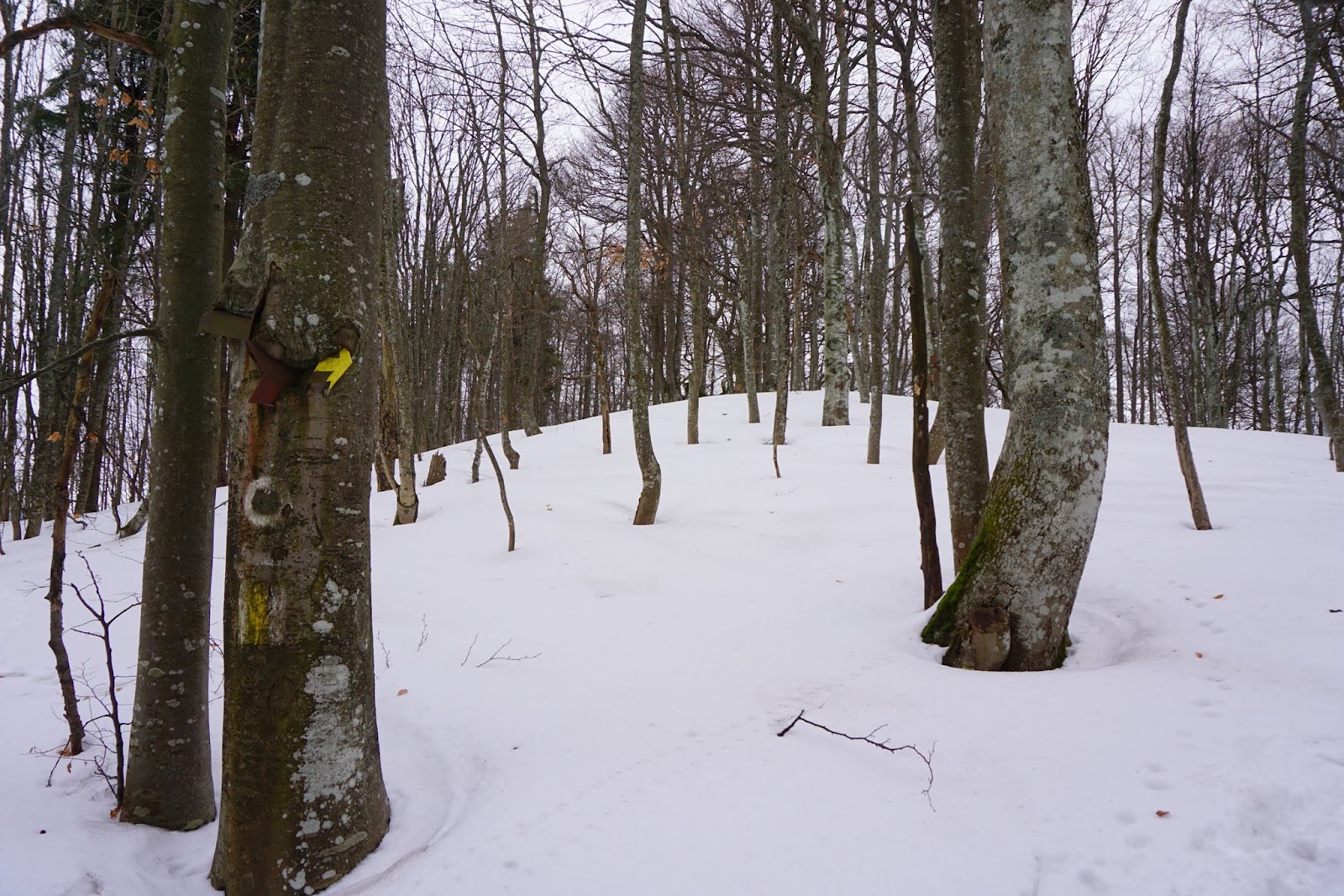 but then I looked at the map and become rather clear that this is not it. Actually if you look it better, on the first tree there is an arrow, and that one indicates, that the yellow stripe take a right turn going down instead of climbing to that bump. And it goes down quite a while just to turn into an even bigger climb. And a few more time it repeats the scenario, always when you think that the bump in front of you is the summit, you arrive to the top of it, just to notice that from there you go down and further away there is an even bigger bump waiting.
So after more than 1.5 hours of breaking snow and throwing lungs out, when you are already in the state of just going ahead like a zombie, finally you can see a bump which is still not the summit, but from where the true summit is already visible: 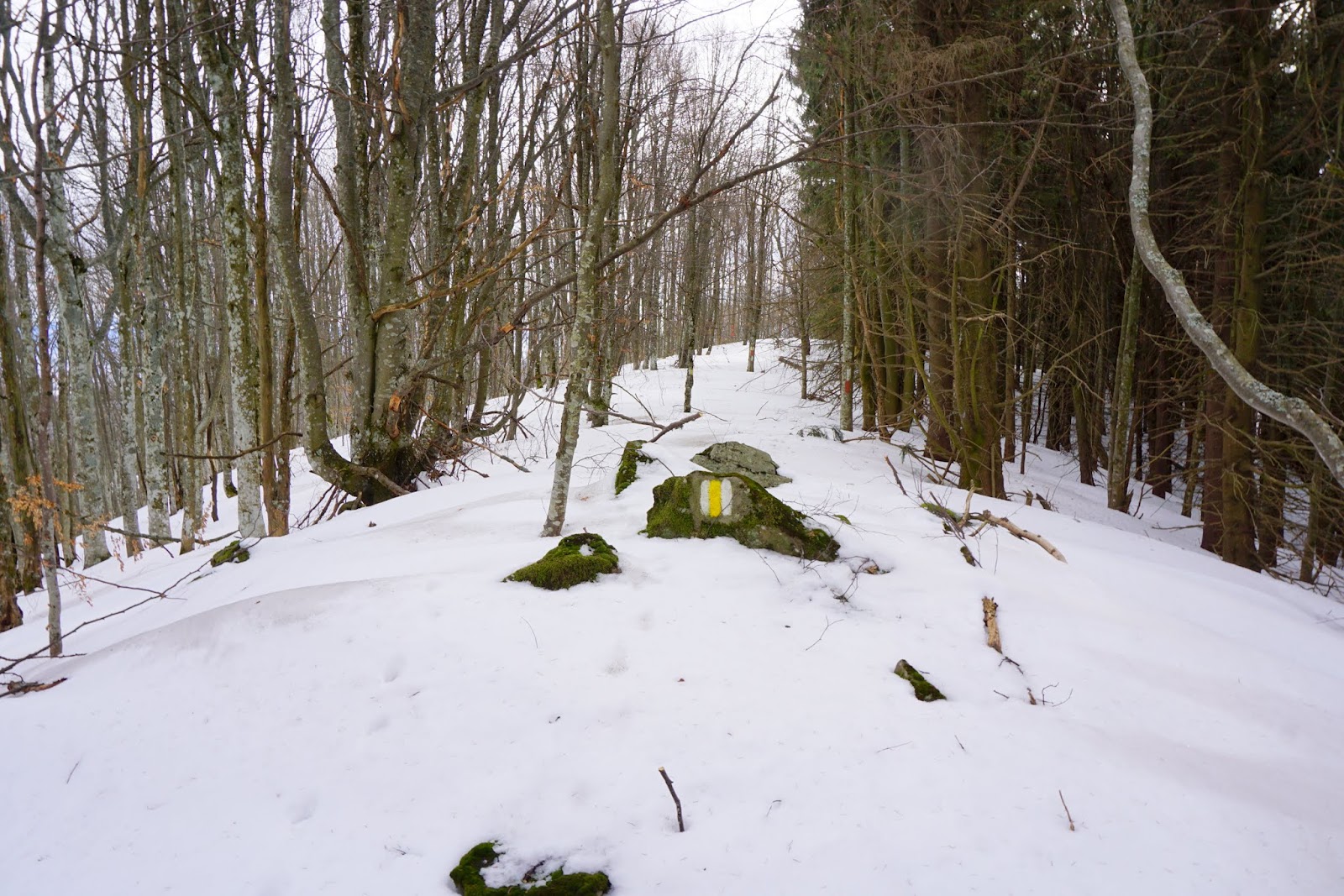 So a few more zombie steps and you are at the summit, marked with a pile of stones with the altitude of the summit (1240) written onto them. Actually that state of zombie is not that bad in the area, because it chases away the animals, and now I'm thinking of the wild boars which seem to like the summit area, trampled completely.
This time was quiet however, so I quickly set up the antenna, there is forest around (oak on one side, pine on the other, rather interesting), but there is quite large space around for all types of antennas, 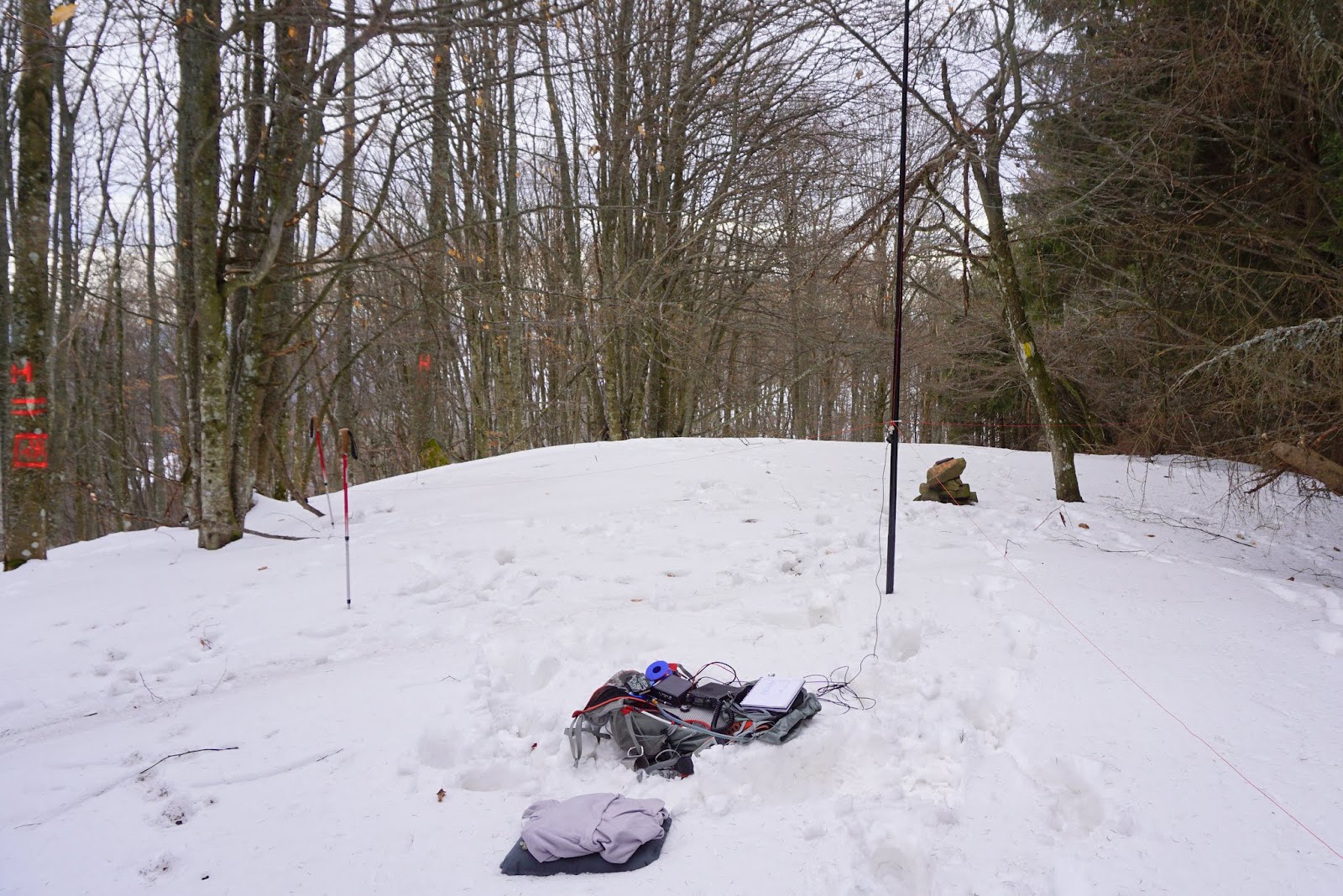 and a quick check on the Sotawatch (very good mobile data signal on the summit) to look out for some s2s, and first to see is EC2AG/P again out on some newly added EA2 summit with a huge pileup. Took me a while to break through but finally got it, and after that with a self-spot I started the usual mayhem for myself also. This is getting pretty standard now, so jump ahead to the part with the pileup dying out and collecting the station. I was staying out a bit longer than on previous times, but the cold started to bite so again I wasn't completely exhausting all the possibilities (especially with some hunting on other bands). I'm ever more eager to have some good summer activations with very long stay on the summit.
The way back down is much quicker with almost like sliding down the hill, but still took quite a while (more than an hour) and started to get again into that just go and go and go feeling until finally I was able to see the hotel building between the trees 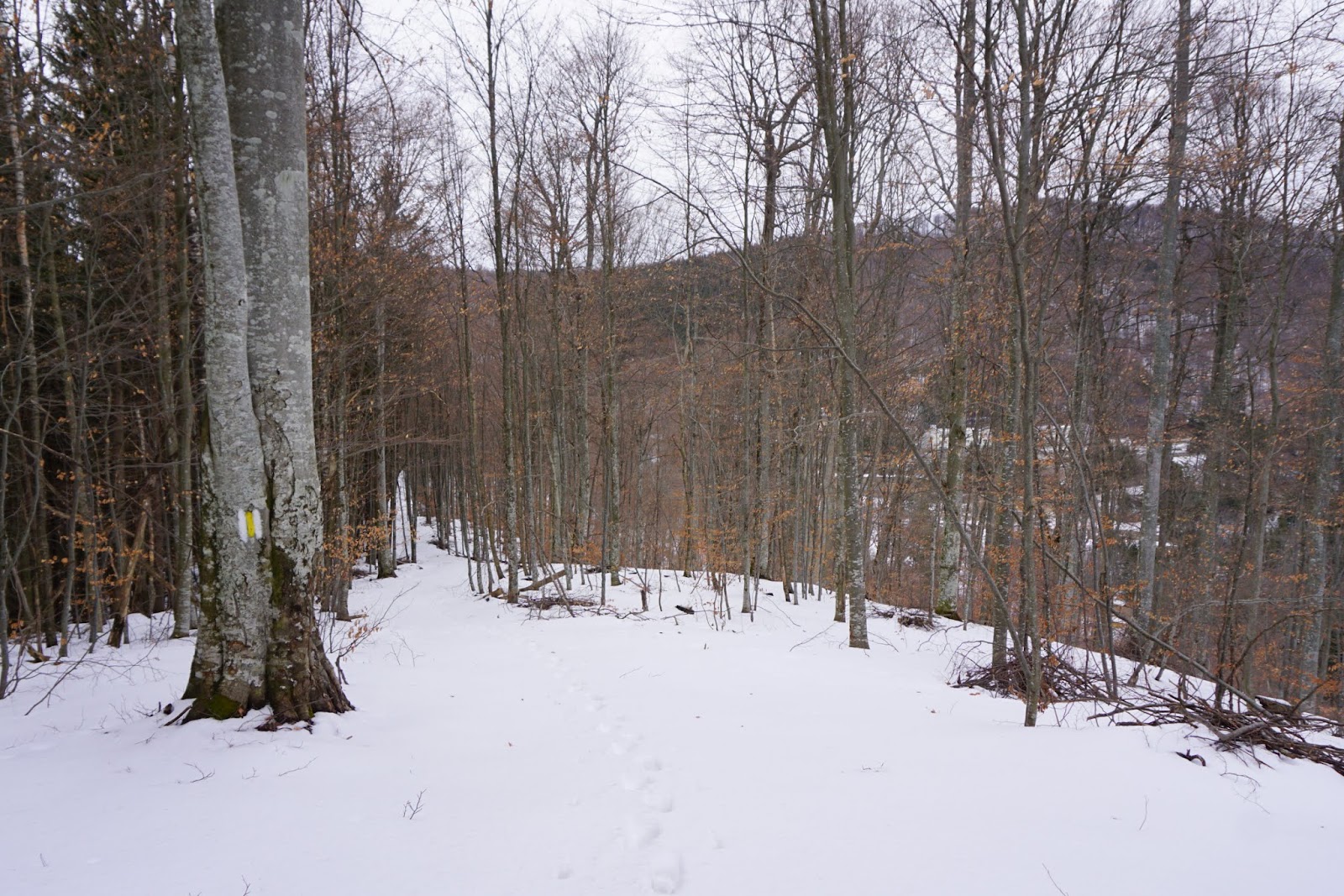 Well these photos of winter activation in mid-forests without any sight or panorama out of it starts to get boring, so better here some nice vivid colors of the tracklog to the summit 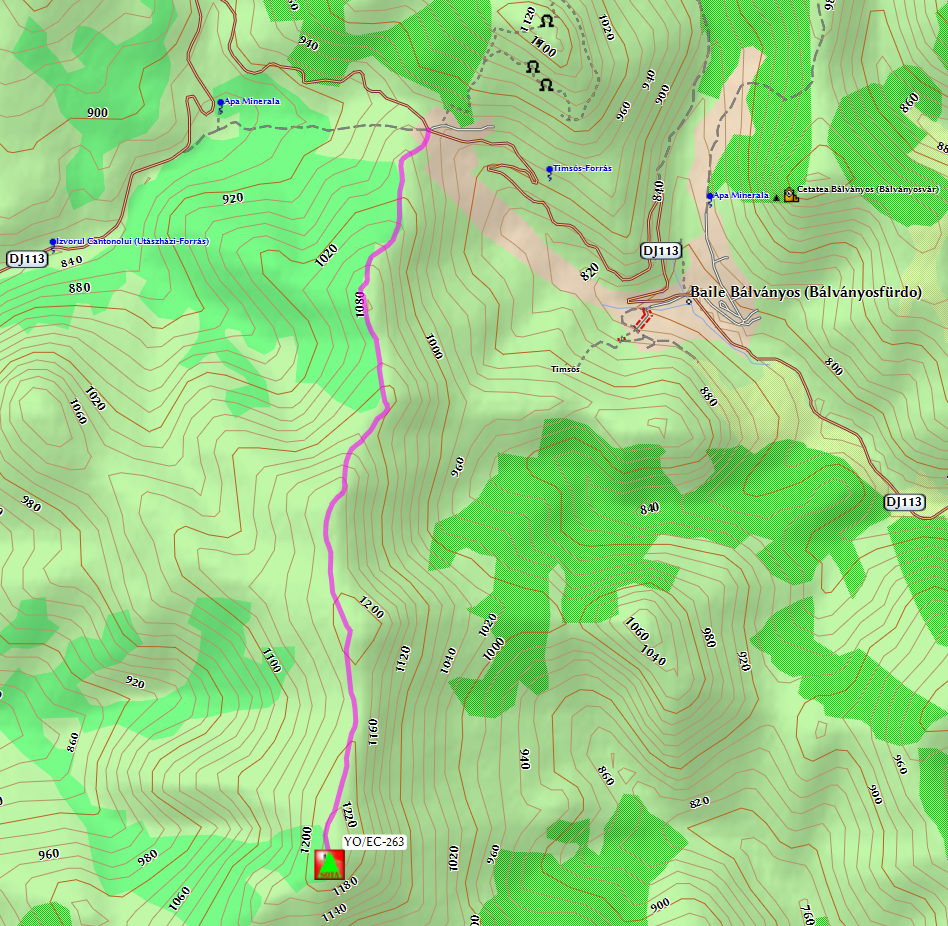 Just one more note, I think that this summit is better worth activating in the summer period, as based on the terrain and trail markings it is possible to get there with a bike, with very few fallen trees and obstacles, and a lot of wide space between the trees. Now I don't know the actual state of the track under the snow, but definitely worth checking out.
Bejegyezte: YO6PIB A bejegyzés időpontja: 21:36