After Răzvan, YO9IRF successfully activated YO/EC-057 having also a very nice report about it, it was time for me to do a little climbing exercise and conquer the summit.
So in what looked a nice Sunday, together with friends Mihai and Sorin, we set out for a little hike to Gropșoare. To make things little more interesting we didn't used the easier track via Muntele Roșu as described by Răzvan, but decided to take from the other side of the mountain, from Poiana Valea Stânii, a small resort in the Telejenel valley.
Valea Stânii is accessible by car from the DN1A road from just outside the city of Cheia, the road is not excellent but doable in a bit more solid cars, in the first part it serpent in the forest climbing a small hill before descending to the Telejenel valley. This portion has some breaks along it due to torrents, so care should be taken. After meeting the Telejenel, the road becomes much better in shape, and also some weekend houses start to turn up. Finally at a large glade we arrive to the starting point of the track, actually it is a meeting point of at least 4 marked tracks, so the place is quite large and well indicated.
Even some horses were there waiting to make friends with them: 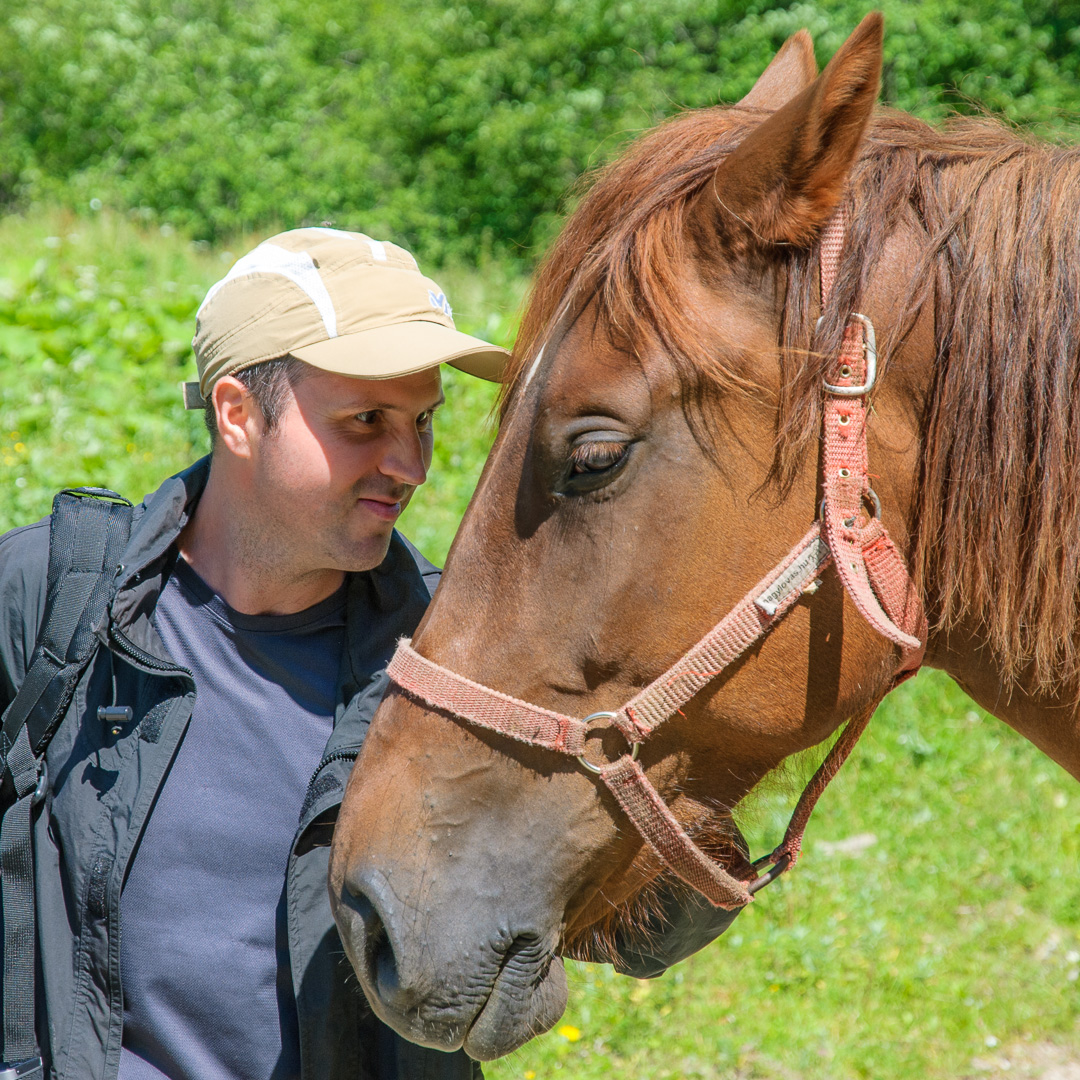 Across the glade the Gropșoare - Zăganu massif is rising above us: 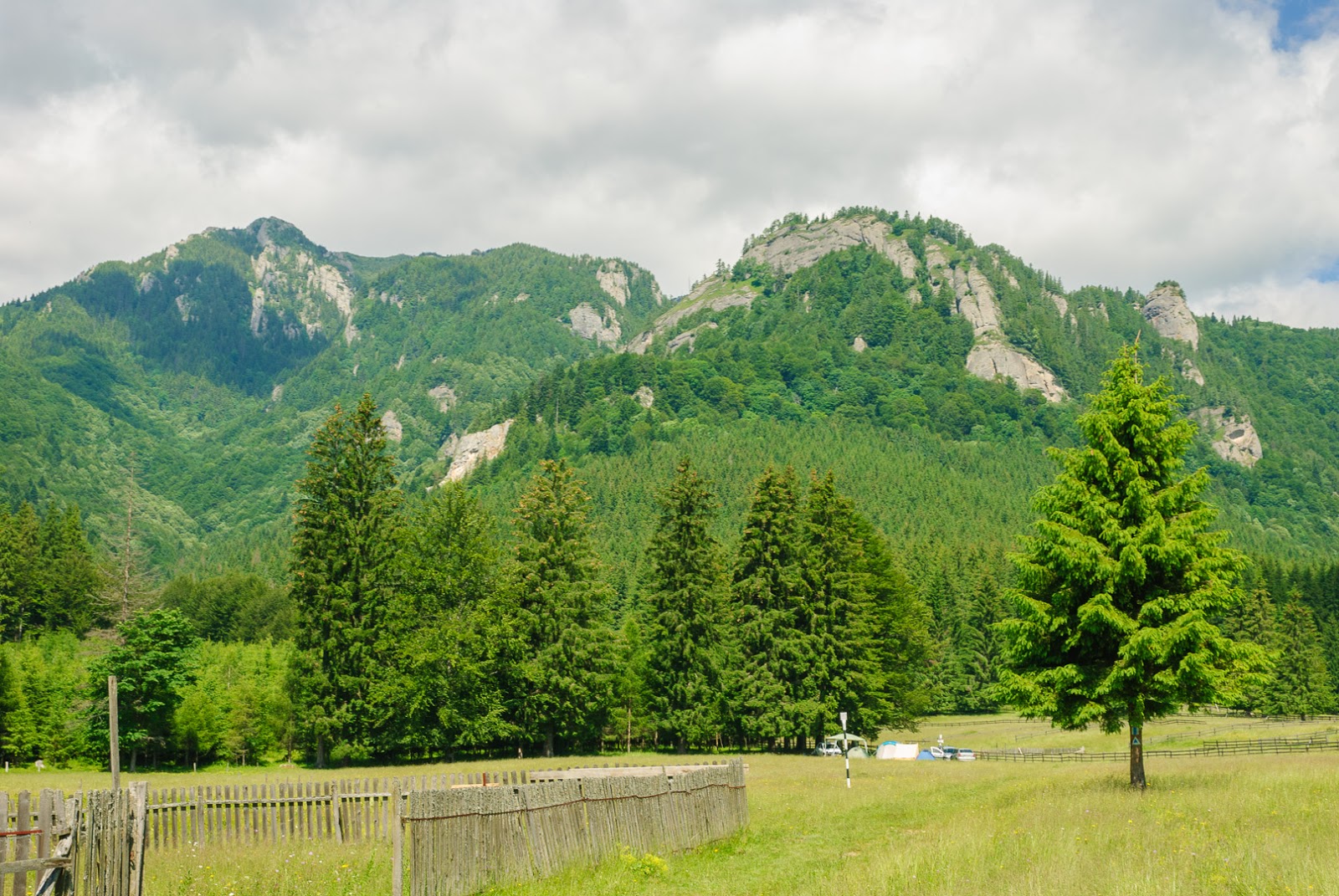 unfortunately that is not the peak we are target, it only shows the valley (Sterp) we will follow to reach the ridgeline, the summit is much behind those in front. The valley is in the crack between the two peaks in the photo.
The trail is very well marked with blue triangle on almost every other tree along the path, it must have been repainted very recently: 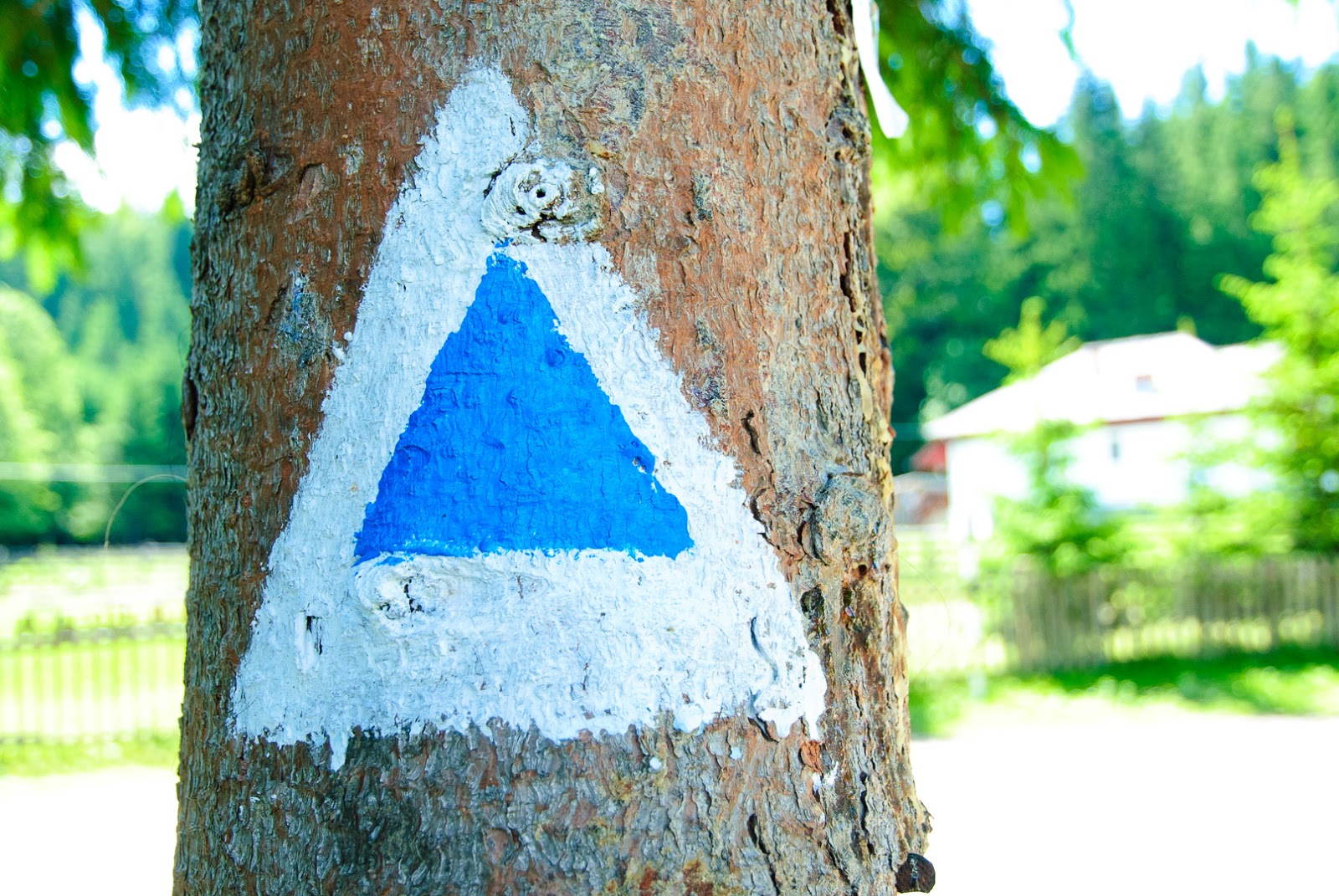 In the first part it goes in a dense forest, starting slowly 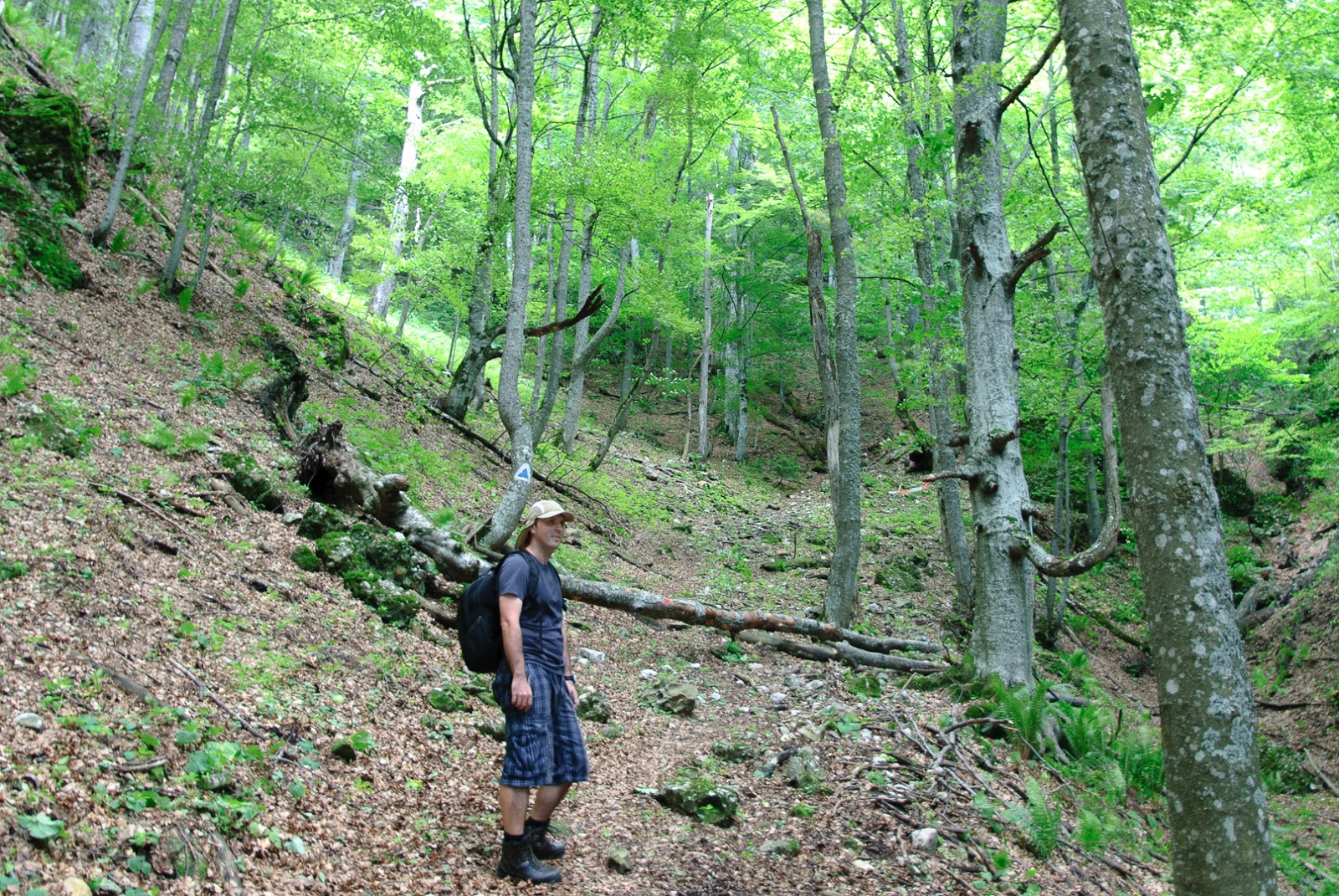 but soon it turns very steep, and keeps on for a good while, so we already spit out our lungs when finally reached the alpine region: 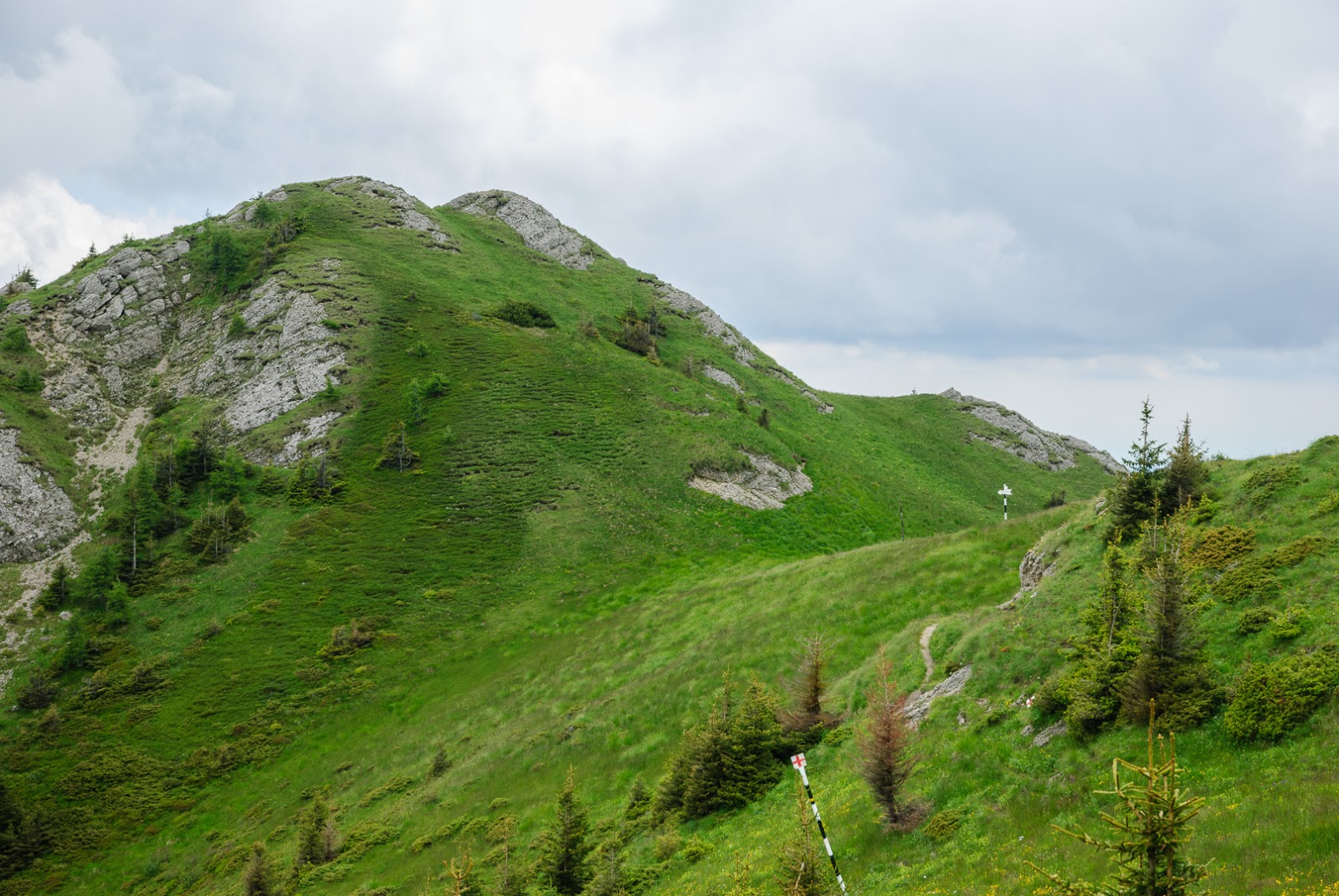 from here the trail joins in with the red cross coming along the ridgeline from Cheia. Of course some more climbing (this time on exposed rocks) awaits: 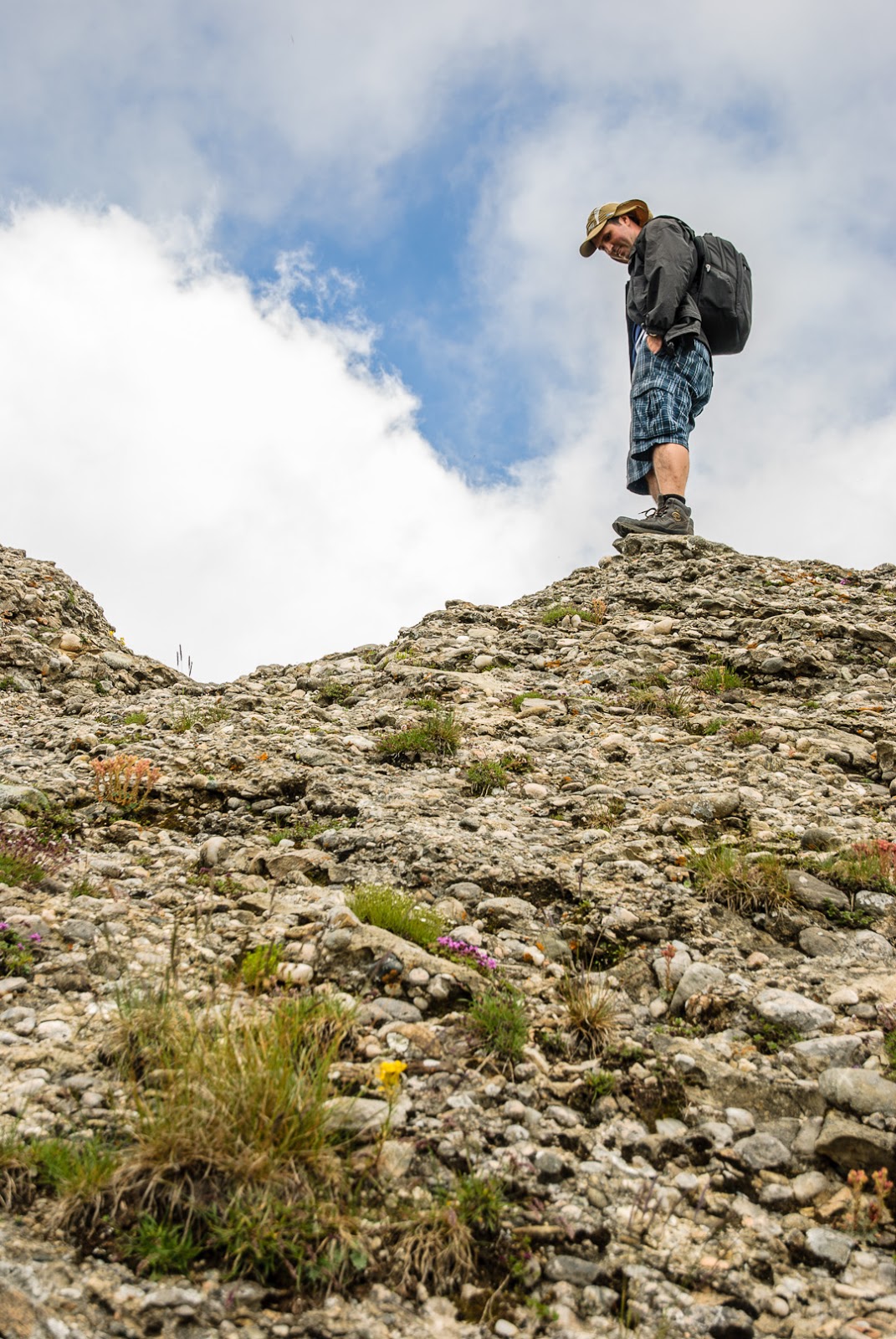 but after climbing the first peak, we can have a glance on the Gropșoare peak, it's the one on the background: 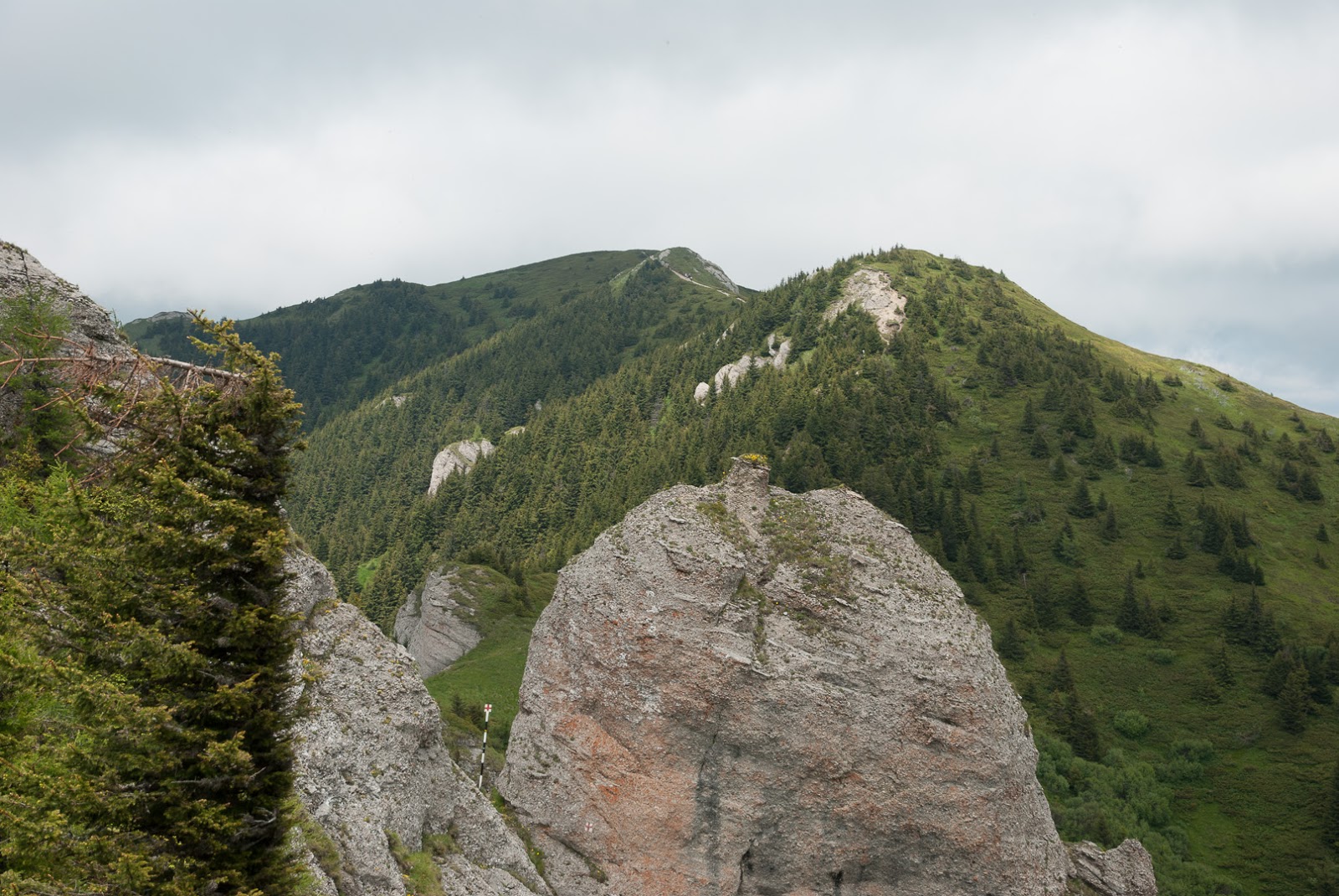 So some more hiking is needed, and we didn't got rid of rockclimbing yet, there is some portion of the trail where some via ferrata is also needed 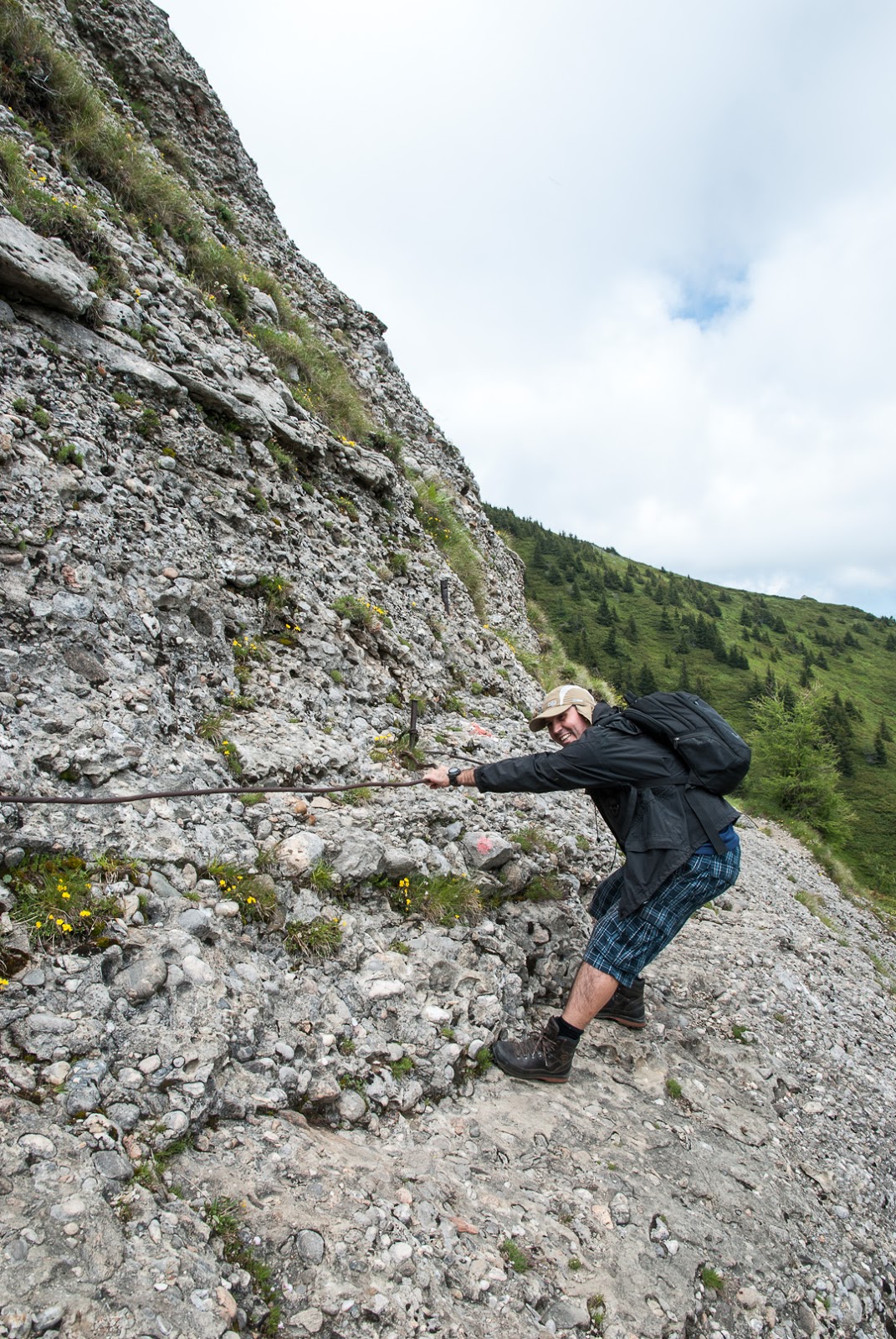 not to soliciting though so in a little more than half an hour since reaching the ridgeline (and after about 3 hours hiking from down the glade) we were finally up on the peak, admiring... well admiring nothing because of the big cloud all around us.
Time for a little SOTA however propagation was also quite terrible, and after about 9 QSOs in 45 minutes, and the team already getting cold it was time move along.
We continued the path along the ridge so that we can get down in the Alb valley (yellow triangle) on the northern side of the mountain (it also gets to Valea Stânii, which is as I mentioned earlier is an intersection of multiple trails).
After descending about 15 minutes, before leaving the ridgeline, the cloud cover already raised so that we could have a beautiful view towards the Ciucaș peak 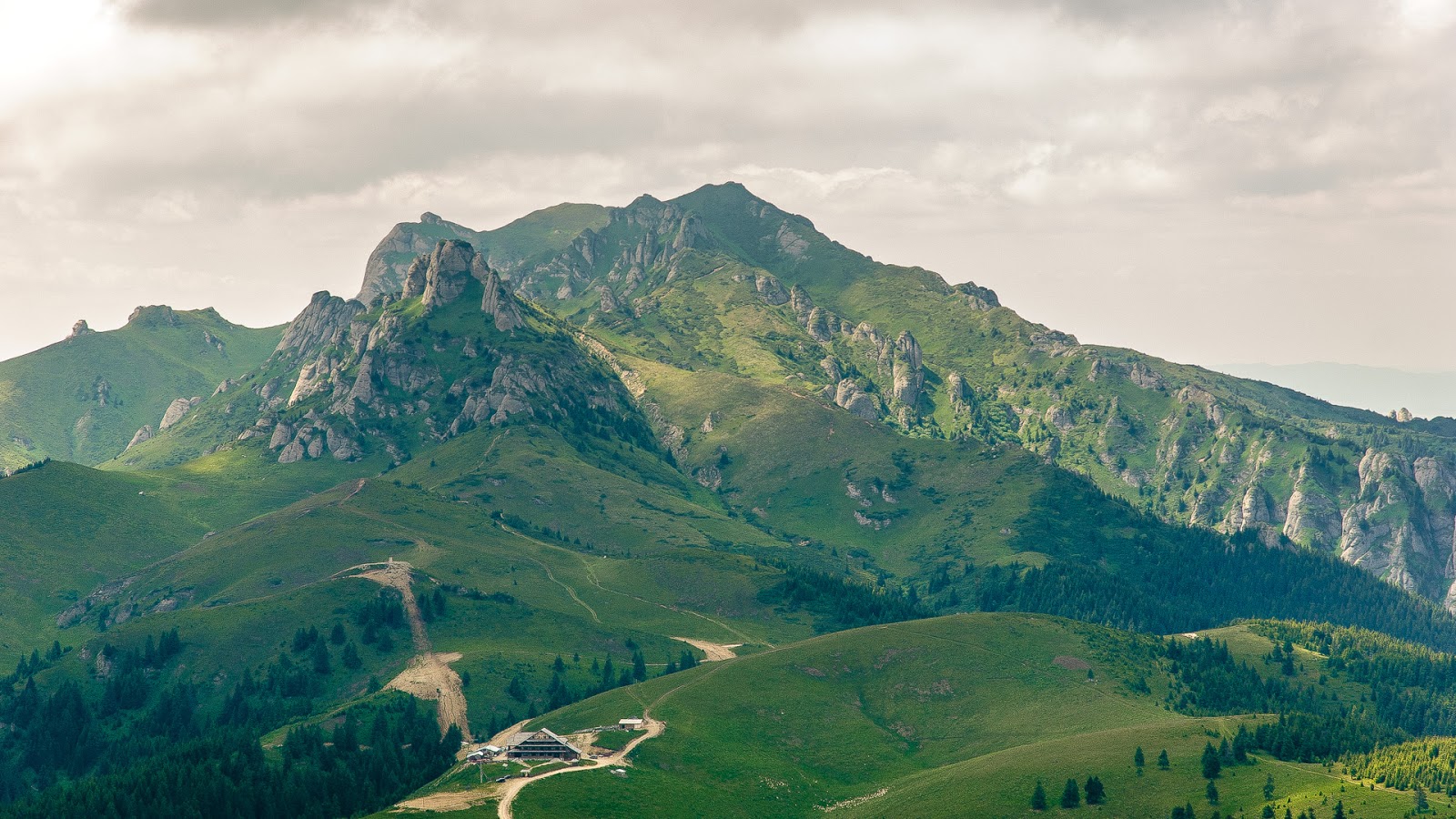 another SOTA summit I really need to do sometimes soon.
Of course when we arrived down to the car, all the clouds were gone, and we had a beautiful sunshine afternoon, this is the usual luck.
Bejegyezte: YO6PIB A bejegyzés időpontja: 22:07