Another summit without any trail on the last ascent, Tesla (no connection to the great inventor, although probably the name has some Slavic origin) is one eye-catching hill emerging from the lowland west of the Csukás mountains. Having a shape of a dome it is an easily recognizable feature even from the distant road below:
Being near the Csukás mountain, it is also a popular tourist destination, either in the way up to Csukás or just by itself, most easily accesible from Babarunca resort following the red stripe trail.
Together with YO6HXO we started out the conquer this piece of nature wonder in a nice sunny morning:
Unfortunately the right after this nice clear path section we just missed somehow the sign, which at a hardly visible point goes to the left, and the big clear path continues forward a few hundred meters, however after that it brutally ends, and we found ourselves in the middle of the forest without any path in forth. Now the wise choice would have been to turn back and find the marked trail, however, the forest didn't look that bad and we decided to go forward uphill, and at some point we will certainly cross the trail again. Big mistake. Unfortunately in the upper region was some serious wood-cutting, and although it was not a clearcutting, but a well arranged rarefaction, they left all the small branches and thin trunks on the ground, making the movement ahead a pain in the ass. It took us at least an hour wasted until we made it trough and back to the marked trail. So be careful and watch those markings.
After reaching the ridge, the trail joins with the red cross marking coming from the left and continuing towards the Tesla Glade, a very large clearing between the Tesla and a Csukás mountain, with beautiful view to both. From the clearing the dome of Tesla is rising out with menacing looking rocks:
The thing is that as I mentioned earlier, Tesla is also a popular tourist destination, 3 more marked trails are meeting us here coming from all other directions, however, actual the glade is the tourist destination, where everybody can admire the magnificent wall, but that's it. There is no trail up to the summit, nothing. But well, SOTA is SOTA, it's about going to summits, so we did go looking for a way up there. And found a possible entry: at the northern face, following the blue cross trail, near the end of the Glade, there is a smaller narrow clearing to the left leading to a pretty clear forest covering the northern face of Tesla. The terrain there is not so rocky, and we were able to follow some animal trails between the ravines up to the higher regions. They were left definitely by some larger animals, but fortunately we didn't met them, and smaller and nicer creatures:
After a heavy ascent (it isn't cliffhanging but still it is very steep) arrived on the flatter portion of the summit, and well in the activation zone, we could started looking out for a good place for the shack. It actually didn't need too much looking, there where plenty of fallen logs to sit down:
and also smaller tree trunks to fix the antenna to:
After about an hour of operating it was time to bring down the equipment and head down in the hope to also activate YO/EC-153. Unfortunately back down in glade, exiting the forest we realized that the very nice weather we left, turned into a very ugly covered sky, with a thunderstorm closing in. We still continued a bit our hike along the blue cross, however not long after the thunderstorm was very clearly near us, above the Csukás:
and the lightnings around us led to the decision to postpone the activation of YO/EC-153 and get down fast from the mountain. So maybe next time we will have better luck.
Here is the track with red marking the way up to Tesla (including the bushwalking everyone should avoid, and the the path up to the summit from the edge of the glade) and magenta the road down we took after realizing that the weather is not on our side: 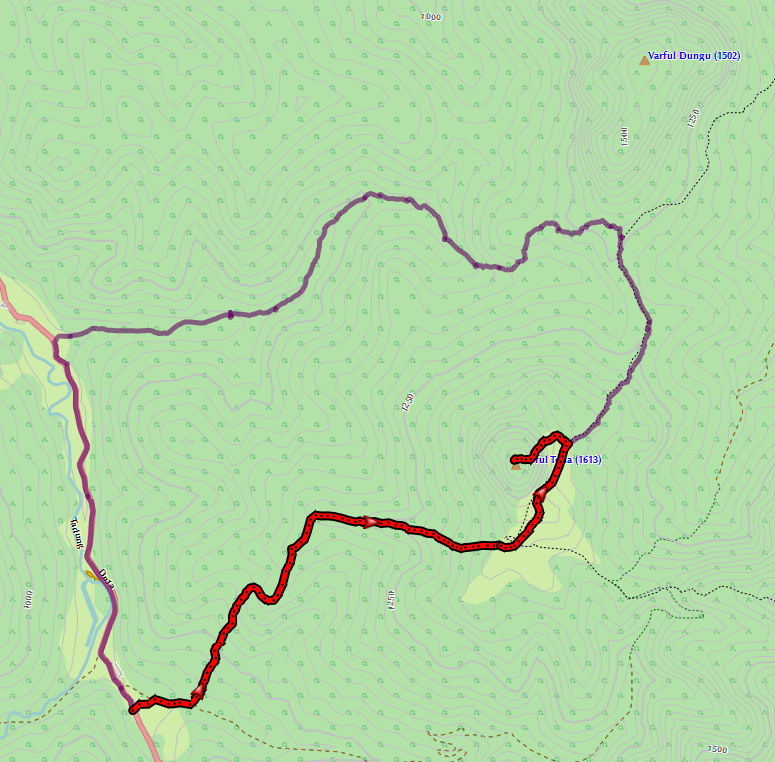