A weekend of snow and sunshine

Excellent weather forecasts for the weekend also meant SOTA activation. Based on the weather in the city and no trail of snow left in there I was expecting also in the lower regions the snow already melted so was going for some summits in the old Miklósvárszék. Of course I coulnd't be more wrong but a bit later about this.
This time only YO6HXO joined so we set out early in the morning towards north. I was looking at YO/EC-374 and YO/EC-413, two smaller hills (in the range of 900m) facing each other on the two sides of the Olt river. EC-374 (Fekete-hegy) is a bit higher and also the closer to Brassó, so it was our first destination.
For starting point a good option is the village of Ürmös (Ormeniș). Actually there are some forest roads branching off the main road just before the the village which probably could take us closer to the summit, as we approached the area we had to realize that I was too optimistic about the snow conditions and even if next to the road it was indeed melted, a bit higher it was still present and the forest roads didn't really promised a good opportunity to safely get back from them without sinking somewhere in the middle.
So we left the car in the center of the village and set out on foot to conquer the village. This meant a hike of about 6km to the summit with about the first 4km out in the plains (well actually more like highlands, there was a bit climbing just at the exit of the village, but after that a long and flat hike (with a lot of snow):
Yeah it is quite boring just going and going, and the mountains looking ever further away, but eventually we got into the forest and wasn't even that late:
The problem was that the road we were following (and a very good road) started to act like a labyrinth just after entering the forest, with many crossroads and turns (it just seemed to be a portion of recently planted woods with a somewhat regular net of roads) but they were not really circulated in the winter, only a couple of them having tracks. Having no idea which one is the good one, we followed the one which had the most tracks. This turned out to be not the optimal solution as the road ended quite abruptly in a valley with some fallen trees closing the way and all the tracks just turned back at that point. We definitely found the spot where the locals were gathering wood, but that was much down from the summit.
Having nothing else to do, just took the most direct approach upwards following the steepest ridge:
Obviously no trails whatsoever in the area (except for the occasional animal footsteps, but only minor ones), but fortunately the snow wasn't that big either so it was a bit breaking but slowly we were gaining altitude. Eventually we came across another road coming from the right which turned out to be the one which we should have taken from down and it really took us up to the summit.
About 20cm of snow welcomed as at the summit, with the summit stone rising out of it and also a small glade perfect to erect the antenna Of course I always forget to take photos of the antenna and the station after setting it up, but I'm just to eager to get down to business and sink into the pileup. And there was pileup, I could manage to get some weak data signal enough to spot myself, which of course instantly brings in a flood of callsign fragments and bits of human voice from which I always trying hard to catch one or two letters. Well this is the fun part anyway and the SOTA community is very gentlemanish in this regards.
The pileup went quiet after about a half an hour including DL1DVE/P breaking through it for a nice s2s. After the band went quiet I also decided to get going for the next summit, not before checking out for other possible s2s, so after some trying (and this time on the wrong end of the pileup for my QRP signal) managed a contact also with EC2AG/P. With nothing else for me to hear, we brought down the station, and headed back down the road. This time we followed the road down all the way also finding the place where we should have made the right turn. Next time I'll be careful on that (tracklog at the end of this post).
Going down was much easier, but then out in the open the same boring flat walk, this time with our next target in front of us. This helped a bit, so a little over 4 hours after leaving the car we were back to it.
Next target was YO/EC-413, Bükkfej with the starting point at the village of Köpec (Căpeni). To get there however the Olt must be crossed and the closest bridge is in Ágostonfalva, the next village to the north. To our surprise it turned out that the national road on which we came up till now and which continues to Ágostonfalva actually turns into an unpaved dirt road at the exit from Ürmös and keeps that way a few kilometers. No other choice, we had to follow it, a bit muddy, but overall not that bad. Before entering Ágostonfalva again the road become paved, and no other surprise followed until Köpec (except maybe that from this point on the asphalt was in remarkably good shape especially for this region of the country).
Again stopped at the center of the village, and from here a very good marked trail (red triangle) goes up to the summit. Actually there are couple of marked trails to the summit from all neighboring villages, but I think Köpec is the closest one.
Again there is a couple of kilometers in the plains before entering the forest and starting the climb on a very large and apparently circulated forest road:
Another two kilometers of hiking in the woods following the trail, except for a small portion where we decided on a shortcut, because it took us on clean snow, while the road was quite muddy, and we were up on the plateau which is quite large and completely bare. On the other hand it offers freat panorama around.
Right were the highest point is are some remnants of some trenches from the World War, and a good place to sit down and build a nice shack.
This time much better mobile signal, so I could start right away with a summit to summit, (ok, with a little patience and trying), and after that the same big pileup. Not to forget, thanks all the chasers contacting me on either or both summits.
While the pileup was going down the same was true for the sun also, so not long on the summit we gathered again to get back down before dark.
Same route back down, we got out of the forest to catch the sun hovering right over our morning summit an to admire a wonderful perspective of the hills we were hiking to 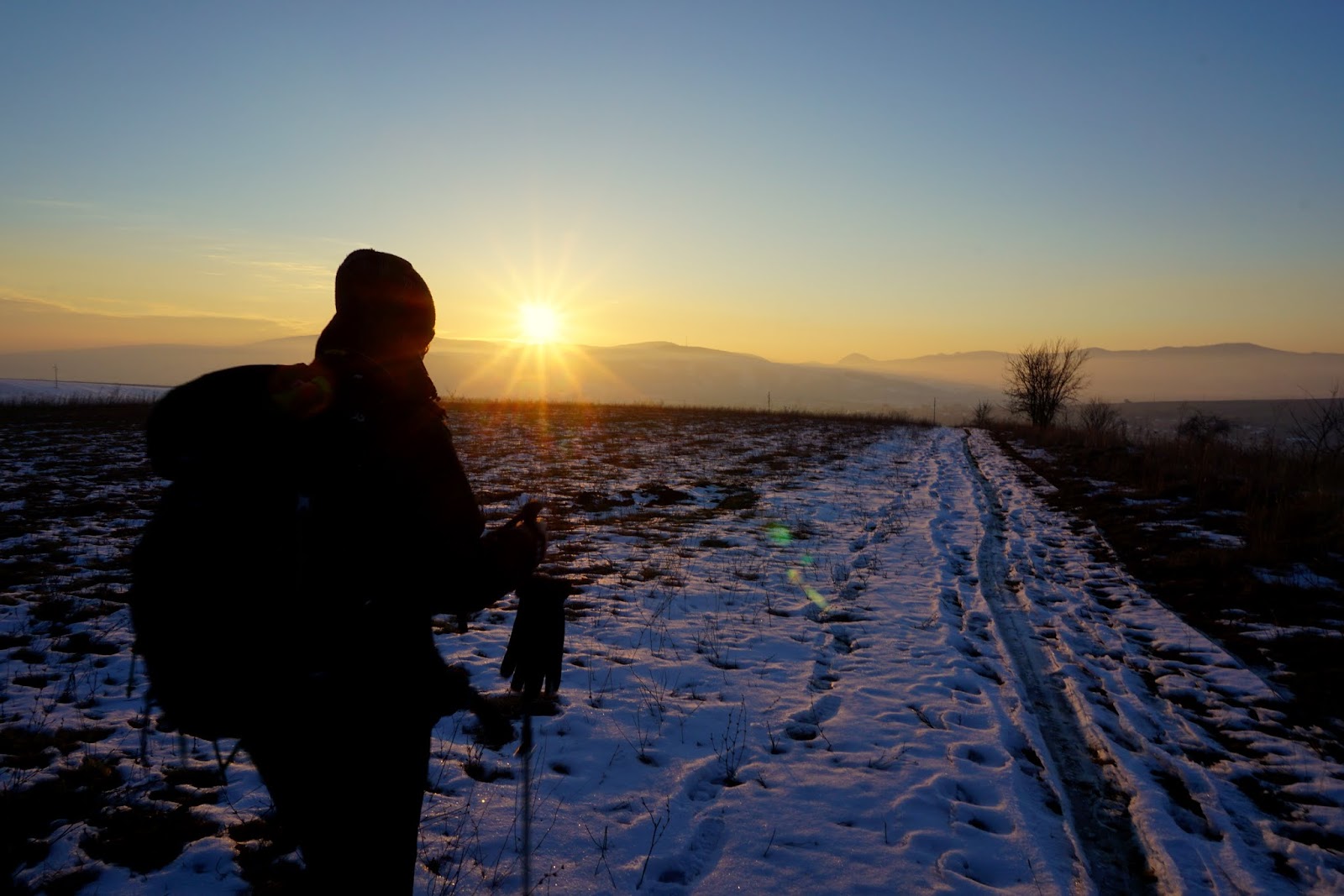 from this point on the sun quickly fell beyond the mountains 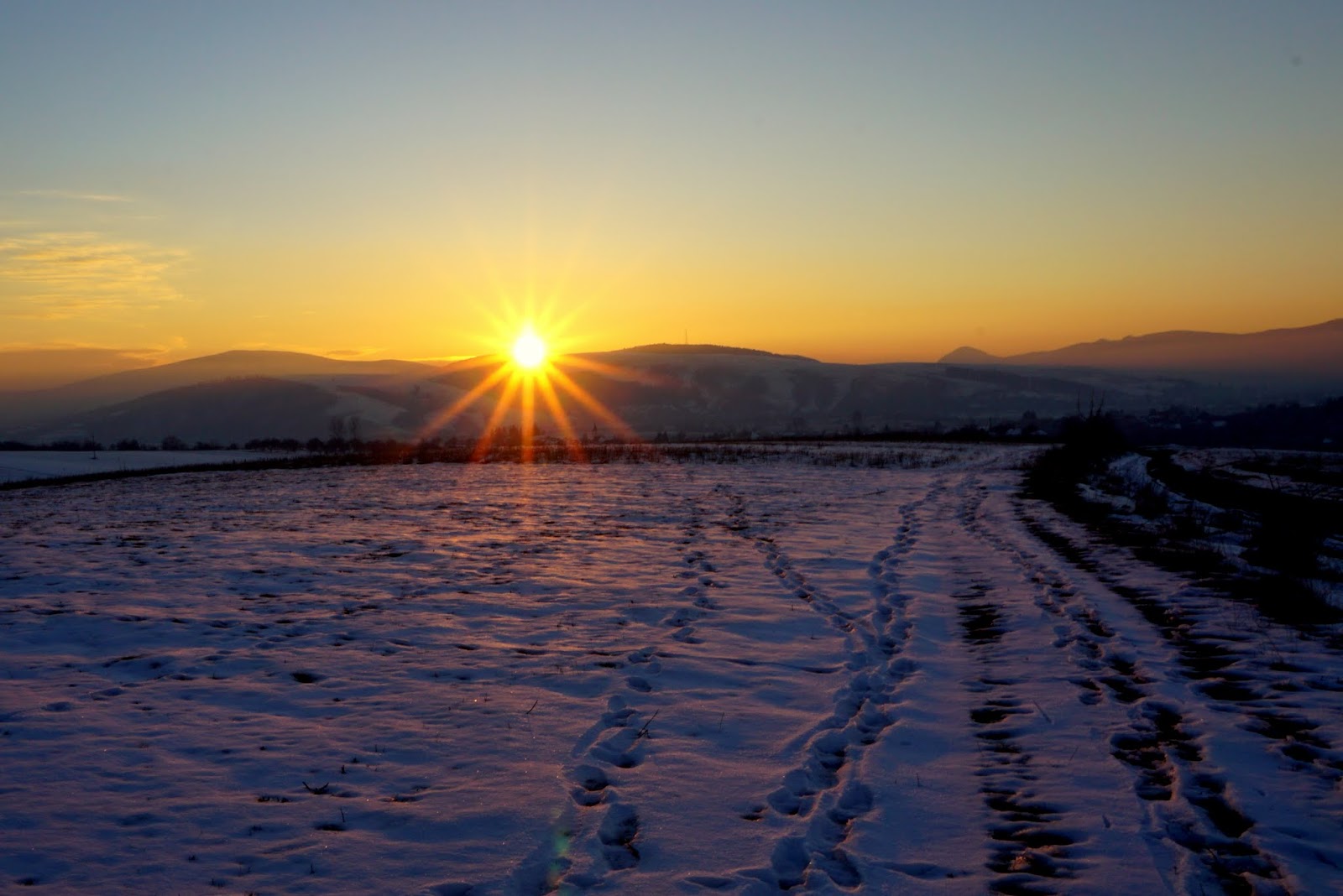 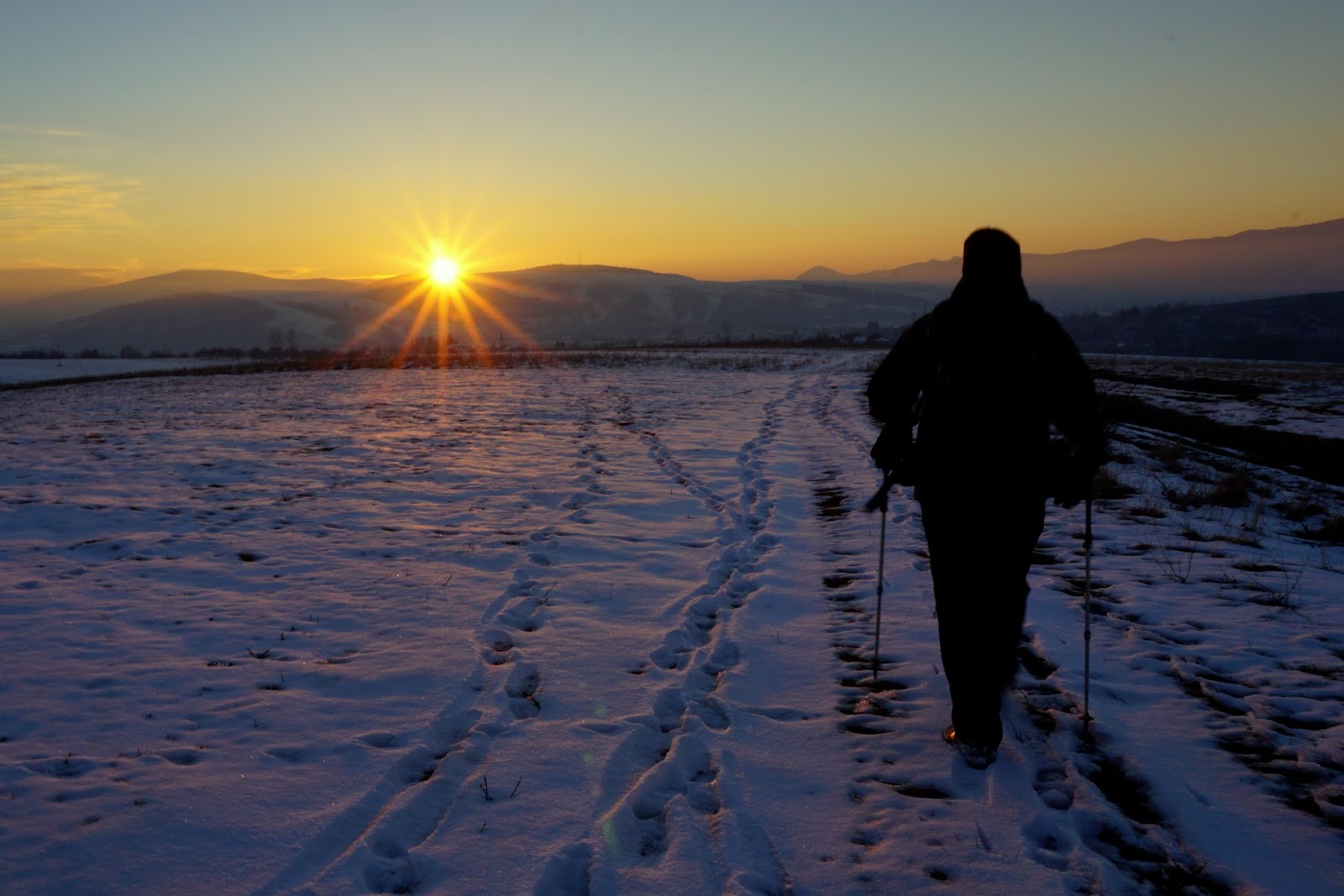 And of course here is the track of the two hikes, red is the first, yellow is the second one (this latter is superimposed on the red triangle trail, so maybe not as easy to see, but at least at one point where we made a shortcut it gets away from the trail): Well, this is the end of story, or maybe not, as the excellent weather kept on for Sunday also, so there was no way I can postpone any more activating YO/EC-477, Fej, the closest summit to my home QTH, which was already growing on me on why left unactivated for so long.
The sun was shining and this time by myself only I set out to the summit. Based on mapping two approaches are apparent to this summit, one from Szárazpatak and the other one from Katrosa. The former is probably the most used road by local shepherds so good easy trail, while the latter is the shorter one but also more steeper. However learnt from yesterday experience I was expecting a lot of snow, and of course this time of the year shepherds don't go up the mountain, so I decided for the Katrosa route, to have a shorter path to break through the snow.
The trail starts with a forest road to the left from the main road, just before the large bridge at the entry to Katrosa and follows the creek for about 3km, after which a big clearing to the left shows the steep wall that has to be climbed to the summit.
Along the road in the valley there were some tracks (probably from woodcutters) so it was an easy go, but after leaving the creek no more track. From satellite imagery the trail should be obvious, however everything was covered with snow, so I started following a clearing in the forest what looked almost like a road
This turned out be a not wise decision as soon it was imminent that I'm on the wrong foothill, covered with woods instead of the clear one seen on the satellite.
Also the road I was following vanished quite abruptly, so I was there in the middle of the forest, with somewhat deep forest and very steep climb in front of me. However going back down and taking the good path wasn't pretty attractive either, so I continued going upwards on a unending climb in the snow slaloming around the trees.
Finally I saw the light ahead of me, as I arrived to the bare plateau, with about 800m away from the summit. Absolutely no trails whatsoever, only snow everywhere I could see, but still an easy hike after the climbing. Oh and a nice panorama to the Háromszék basin
Quick setup of the radio followed, again digging into the snow, but I'm already getting used to, and as turn on the radio I hear SV3GLI/P calling CQ SOTA, it took some time to break his pileup, but in the end a good start with s2s contact. And to be better after checking Sotawatch (good mobile net signal on the summit) run into GW6WRW/P for another s2s. After that a selfspot and the usual pileup for me as well. Another highlight was DB7MM/P breaking through my pileup for the third s2s.
After the pileup dying out and bringing down the station, I was heading this time the correct route intended from start, which was quite clear where to descend from the summit
This route is much easier (especially downhill, less then 20 minutes I was down to the creek), so I just put here the tracklog of this route, it is also a good approach for climbing in the summer, as except for the 100m portion at the base it is clear of the woods. 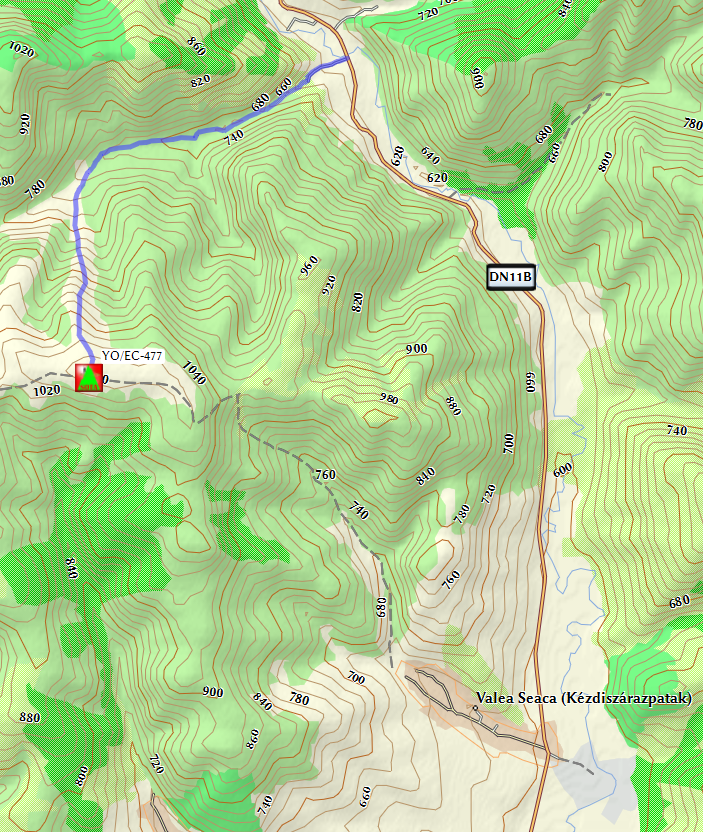 That's about it, wonderful and tiring weekend, overall a big fun.
Bejegyezte: YO6PIB A bejegyzés időpontja: 21:47